My passion for aquariums started when I was 12 yrs old and it grew quickly. By 15, I had six tanks and had bred Betas, Cichlids and numerous species. I even had a small saltwater tank with Seahorses and a couple of Damsels. But then...my dad bought me a computer and I found a new hobby. The tanks and the fish soon found new homes.

Fast forward nearly 35 years to last October when we stumbled upon a LFS that was going out of business and we never knew existed (License to Krill in Santa Cruz). We were amazed with the selection of corals and critters that could be kept in a glass box. We immediately decided to give it a shot.

We bought a 55g tank from Craigslist which included the stand, heater and a Fluval 406 canister filter for $140. Rimfull, with a plastic frame and a center glass brace, sloppy seams and a good dose of scratches. But, a good starter.

The dying LFS sold us a ton of other things at great prices: crushed coral, some live rock, a Current USA LED light and promised a starter frag pack once the tank was ready.

We set up the tank and with all the live rock, sand and a dose of bacteria it cycled quickly. We added a cleanup crew when the algae showed up. They cleaned it all up.

Finally, we were ready for corals and fish - we added two clowns and a yellow Watchman Goby which were very happy. Our starter frag pack included a beautiful piece of pipe organ, a green finger leather, Zoas, pulsing Xenia, a few mushrooms and even a small Blasto.

We knew nothing about corals, but researched diligently and all the corals have thrived since then, even though our setup leaves a lot to be desired. Except for a Goniopora that closed after a while and never came back.

We got a beautiful RBTA from someone we met at the LFS and had too many, which the clowns took to after a week or so. We added a few more fish and some great frags, including a really nice Toadstool. We also got some red grape macroalgae. We have a cleaner shrimp, a peppermint shrimp and a coral banded shrimp. We also have an Emerald crab, two pom-pom crabs and an arrow crab, all molting at regular intervals. Recently, we got a feather duster. We got a mini carpet anemone, a rock flower anemone and a low end clam.

We have a lot of bristle worms and spaghetti worms, but they do no harm, so we keep them. We also have a lot of pods that seem to be thriving. No algae problems and parameters are stable.

We spend countless hours staring into our own personal slice of the ocean, discovering new things and watching these unusual critters live out their lives. When visitors come over, they are mesmerized.

We are planning a second tank... 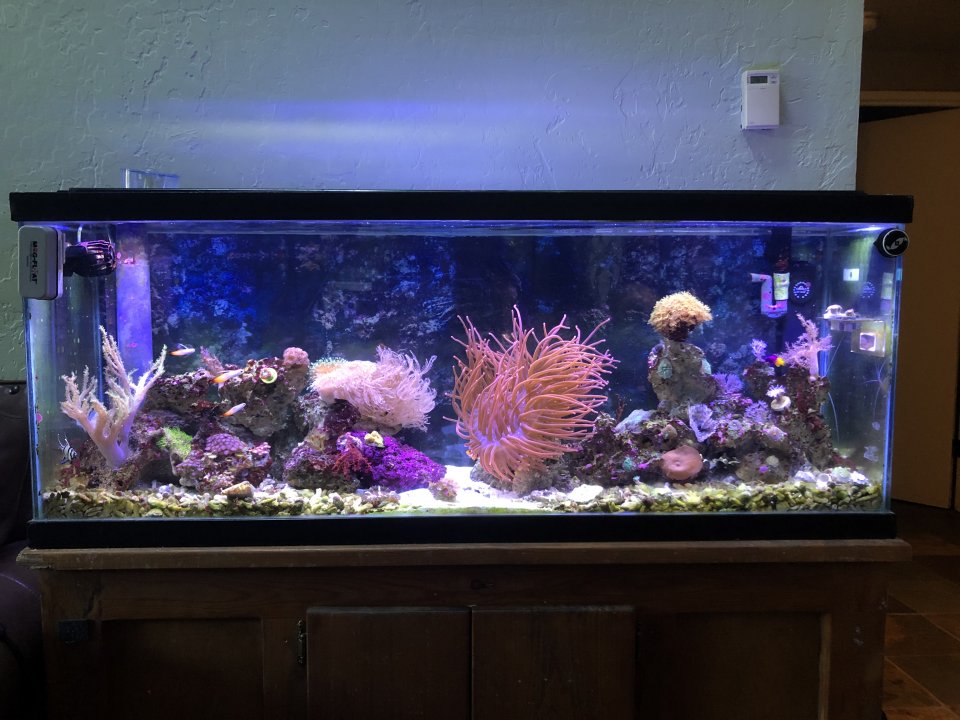 One of us is not a fan of the background...

Staff member
Nice. The background being black or something else?
S

Wlachnit said:
Nice. The background being black or something else?
Click to expand...

It’s a picture of rocks

Forgot to mention the $35 skimmer that is ugly AF but, lo and behold...it skims

Ahh...I didn't notice that at first. Kinda clever. Looks good in the pic. Besides, eventually it will mostly be filled in and you won't see much of the background.

Very few. We dose a tiny amount of calcium when it gets low. 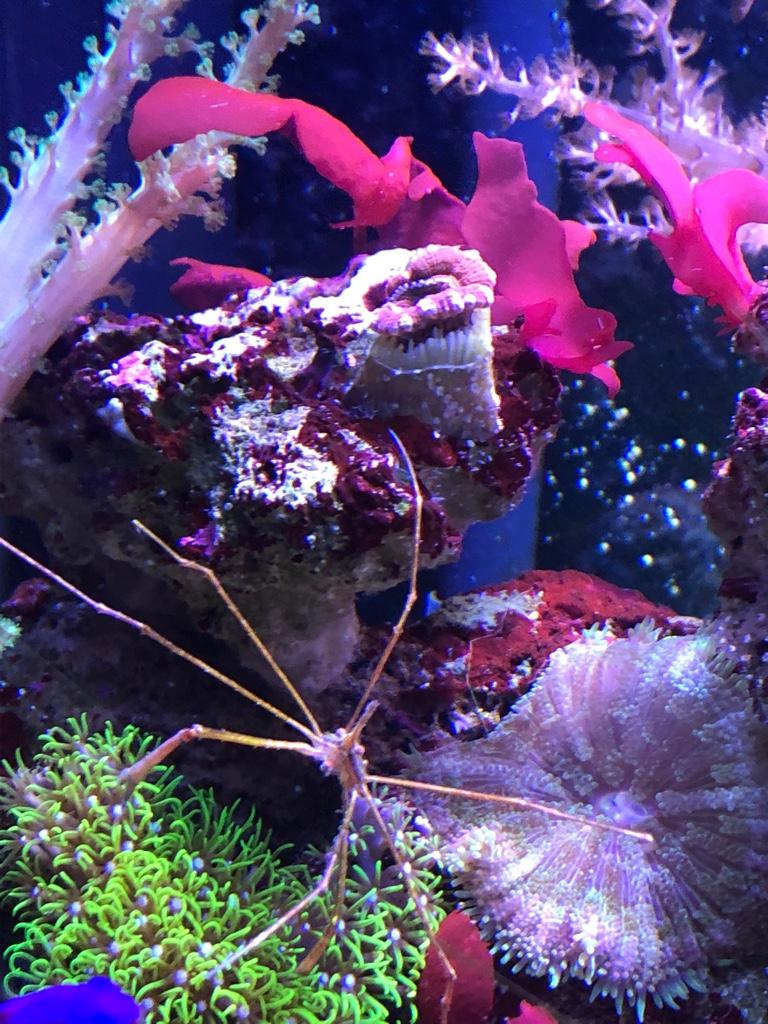 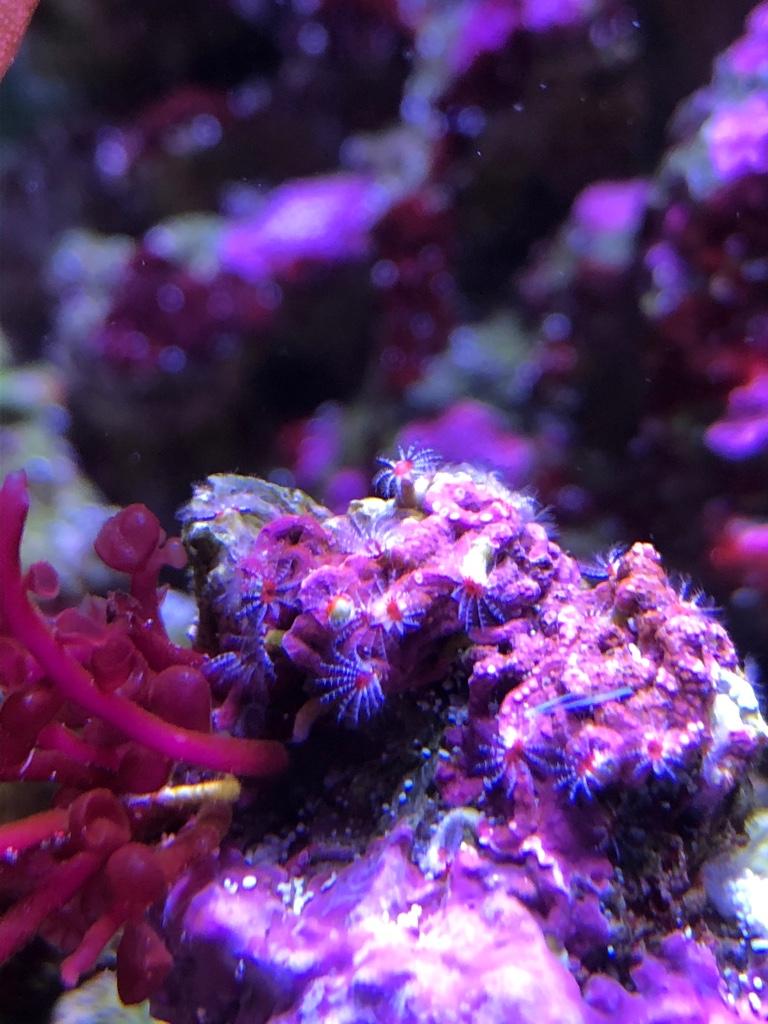 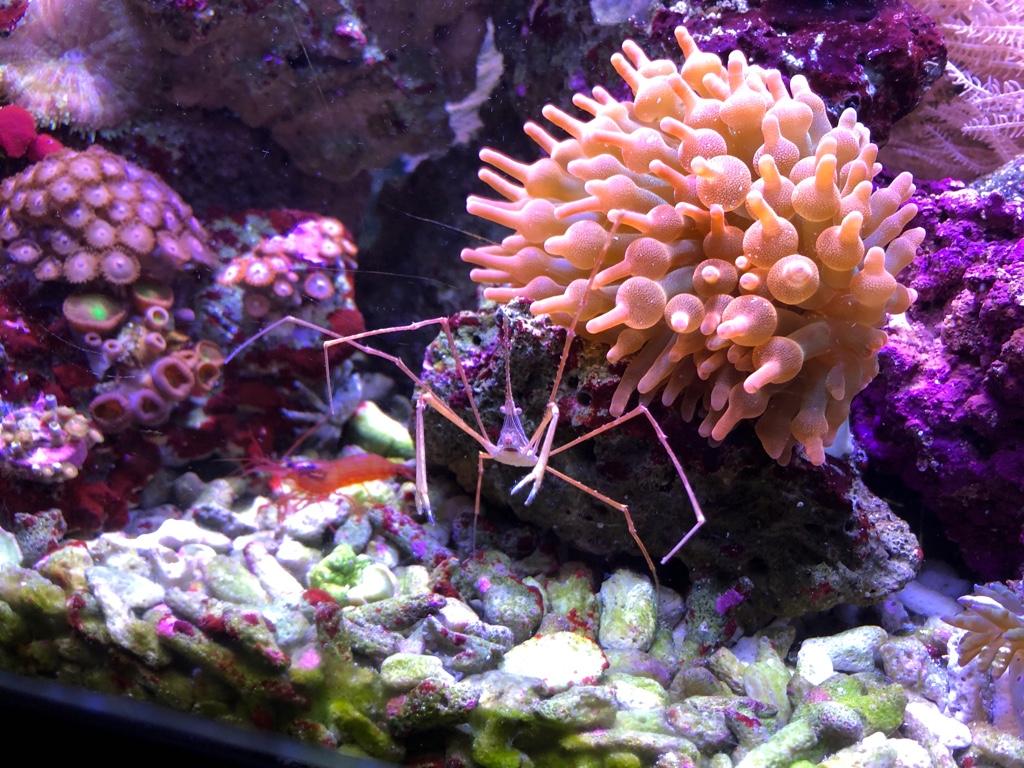 Sent from my iPhone using Tapatalk

Where did you find live rock that has dragon’s breath macroalgae growing on it?

I’m curious how your emerald and arrow crabs get along, and if you’ve seen the arrow crab eating bristle worms or vermatid snails - that would make me think about getting one too.

The dragon’s breath was unintentional. It just sprung up one day and is now on several rocks.

The crabs get along just fine. I also have two Pom Pom crabs and there are no issues. I have not seen the emerald eat vermetids or bristle worms, but he does take care of bubble algae.

I haven’t seen the arrow crab eat anything other than catching brine shrimp when I feed the tank.

Today, we finally discovered why our bristleworm population has been decreasing. 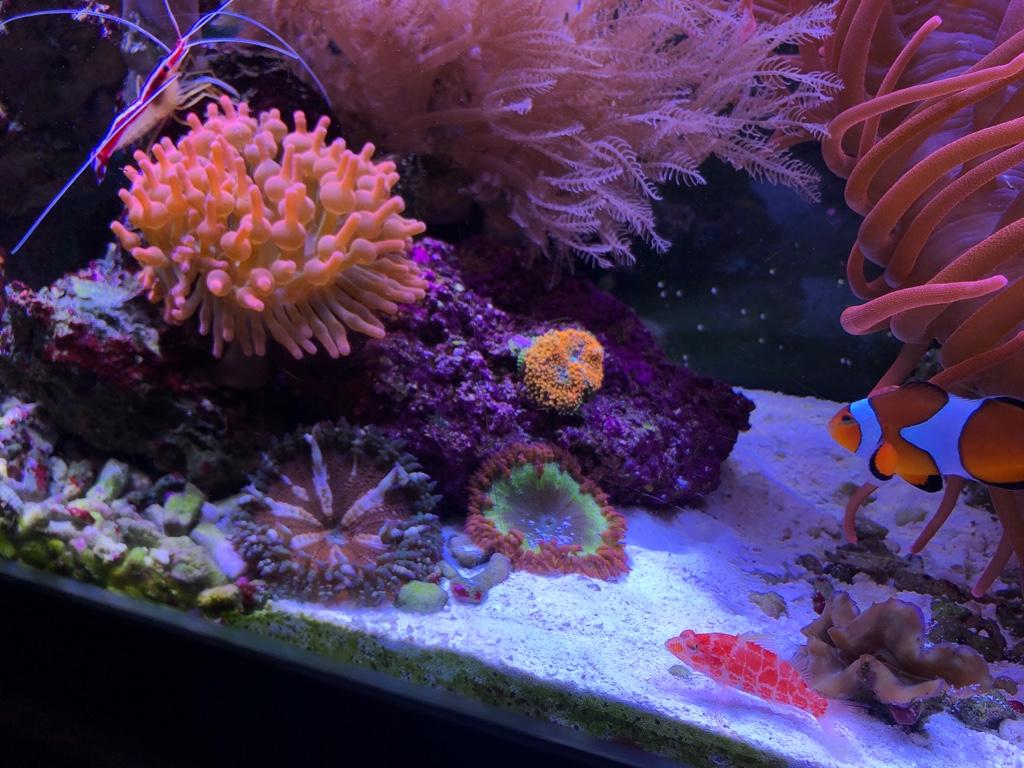 Added a HOB UV sterilizer plumbed into the canister filter return and our water is crystal clear. It also definitely helped save at least one of our fish. Our Royal Gramma was on his last leg - not eating and swimming very little the day before the UV. Now, he’s back on track and fattening up. I can safely say the UV is helping us manage ich.

Our Florida is growing a new mouth...imminent split! 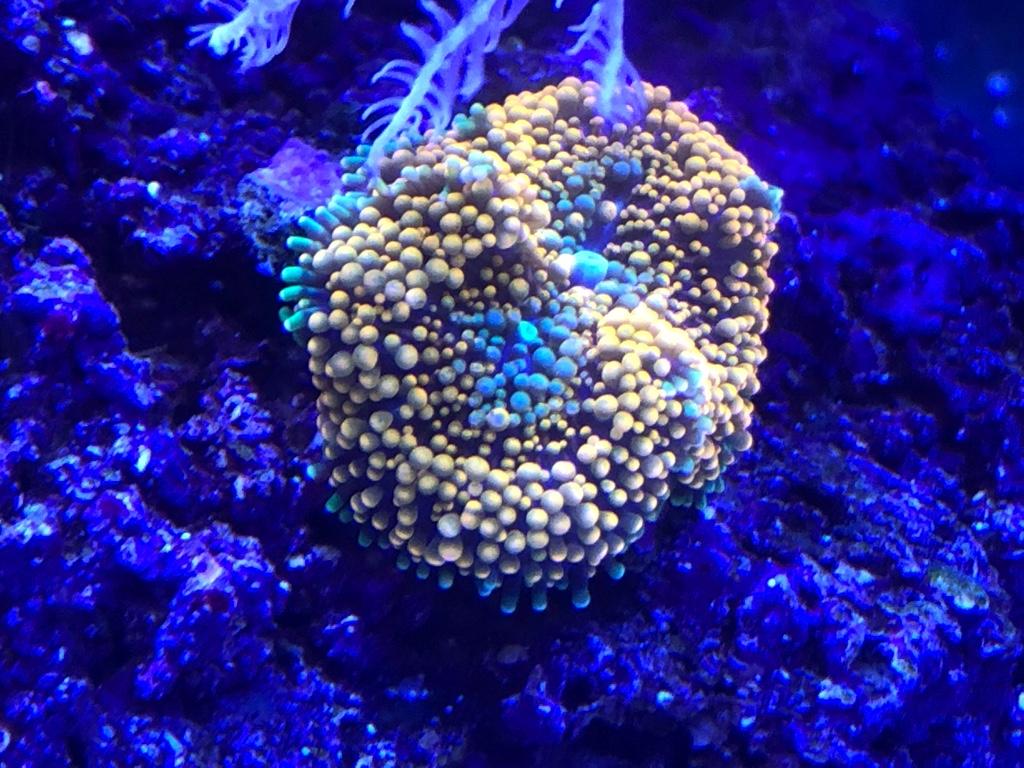