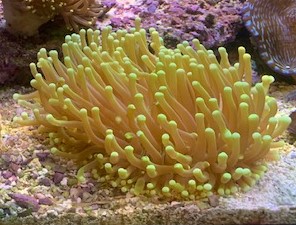 Bruce has the month of April to show off his new tank and any other ones he has running
Last edited by a moderator: Apr 6, 2020
S

Staff member
Does Bruce even have water in his tank?

Pics to come this weekend.

Staff member
I’ll believe that when I see it!

sfsuphysics said:
Does Bruce even have water in his tank?
Click to expand...

We filled it last September.
S

Staff member
Ah, I just don't remember seeing many (any?) updates about where it is now.

At least a Friday teaser

we finally get to see it?

A little history:
(To the tune of the Brady Bunch

Hey, here's the story of a cat named Bruce
Who was busy with three tanks of his own
There were three tanks that wanted to be together
So Bruce moved and took out a .... loan


So this one day they all merged together
And they knew that it was much more than a hunch
That this group must somehow form a together, and
That's the way they all became the Money Pit

[Chorus]
The Money Pit, that Money Pit
That's the way they all became the Money Pit....

The tank was delivered to Elk Grove in August, and required the removal of the front picture window to get it into the house. I did my typical lousy job of wiring it up, and getting the equipment area and sump area prepared within the first two weeks. Then Mike (@Coral reefer) drove from the Bay Area to do his usual outstanding job of plumbing a shit-ton of equipment in what turned out to be a very small amount of room. After that, there were trials and tribulations, floods, and a brief showing by all Four Sea Horsemen of the Apocalypse spreading their disasters. Frankly this tank was a major pain in the ass like no other tank I've had (and for a lot of very predictable reasons looking back on it), but as of two months ago it finally turned the corner, and I feel like it's healthy and beginning to stabilize. Some of my original starting equipment has been switched out for various reasons.

The tank is a custom CDA 225 gallon that's six feet long and three feet wide. I loved the long, low, and wide look I couldn't get in a standard tank. The stand is also custom built by CDA with electronic compartments on both ends. It has a 30" shadow overflow with two returns. The sump is a 48" Bashea. The lids are custom from Clearview.

I currently run the Triton Method to reduce water changes to about one every three months.I do an ICP test once every two months. I should do it once a month, but I'm lazy. The only other thing I dose regularly is Brightwell's Amino's. I also run GFO as needed which usually amounts to one week out of the month right now. I check phosphates with a Hanna weekly. The Trident does the rest of my regular parameter testing, and I keep Alk at 7.5, Cal at 410, and Magnesium around 1390 of late.

Weekly maintenance (that often goes two weeks) consists of emptying and cleaning the skimmer overflow device, checking the algae scrubber which at this point needs to be cleaned every 3 weeks, changing out Co2 media once every two weeks. The only thing done more often than that is replacing frags the Tuxedo Urchins picked up and tried to wear a few times a week.


Fish and Misc Livestock: (All wrasses are males unless otherwise noted)

Pics will follow tomorrow along with some coral highlights. 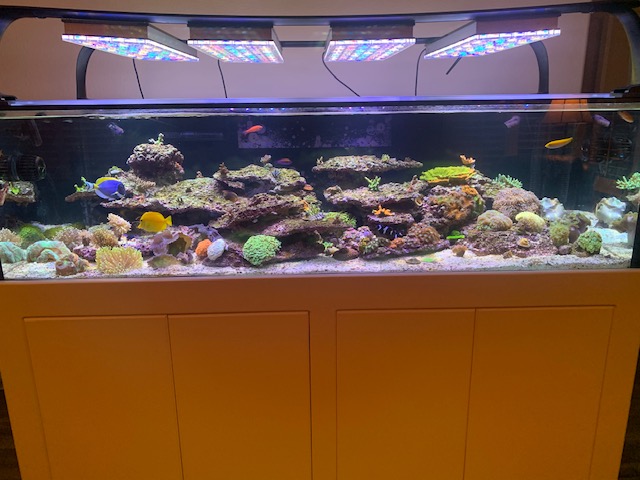 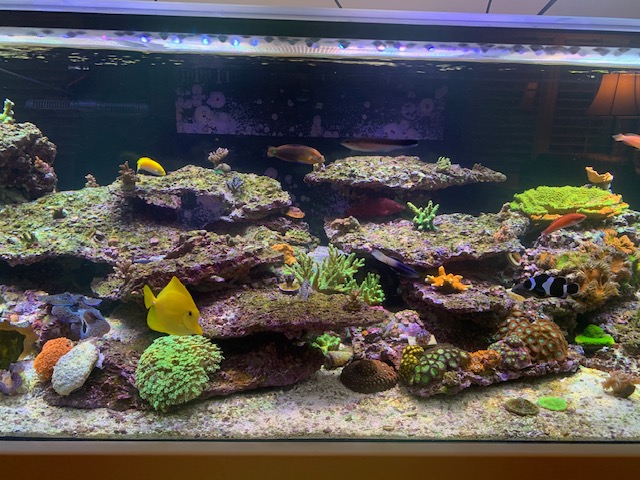 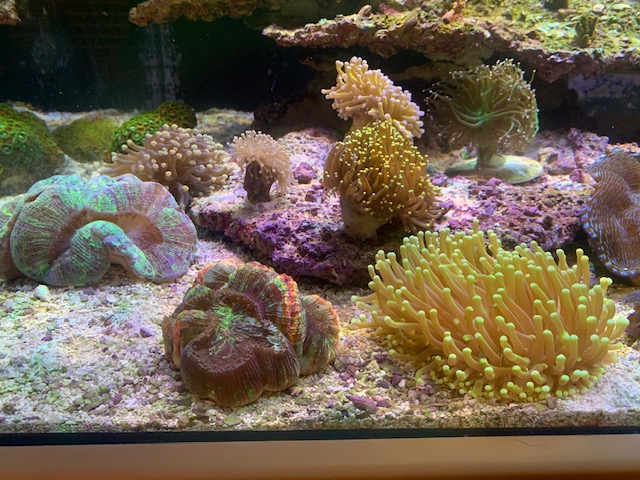 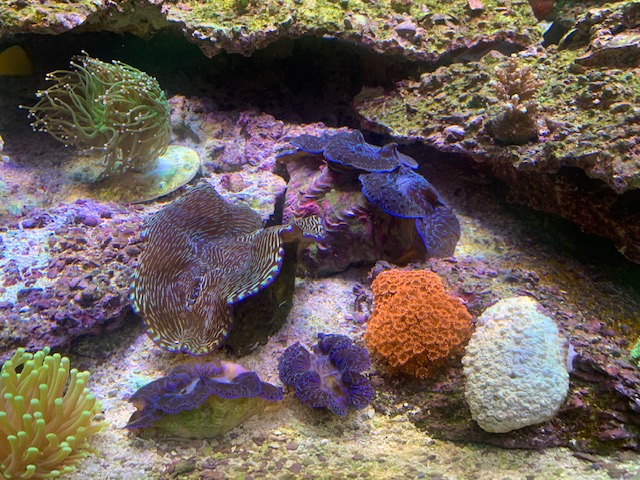 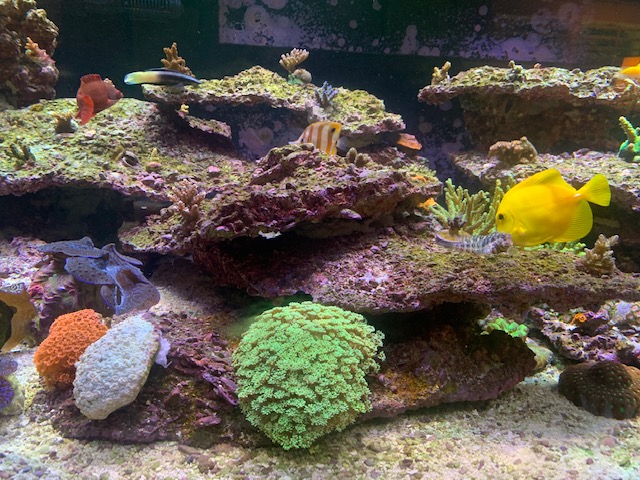 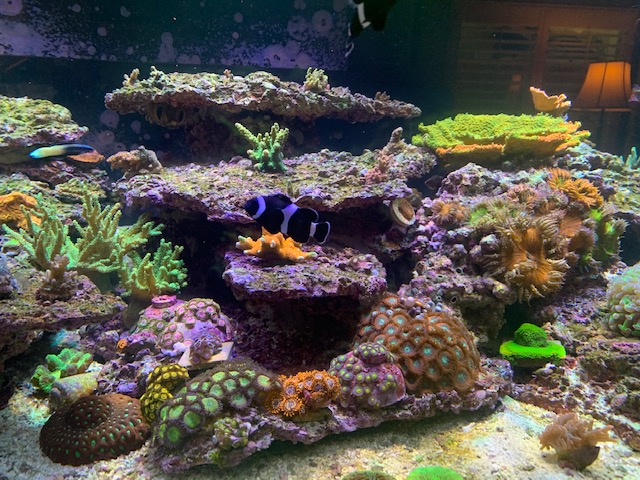 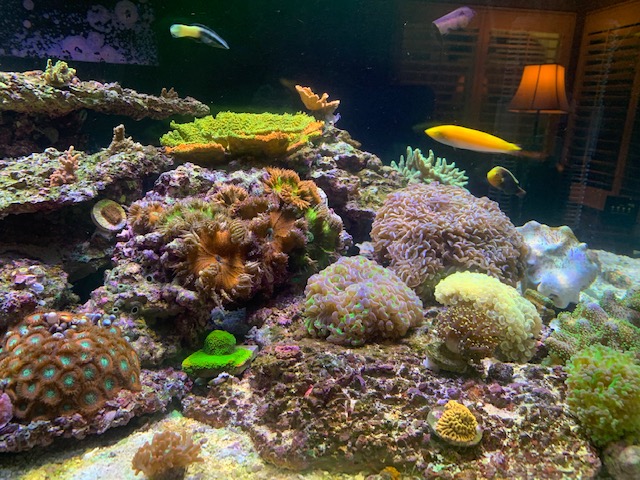 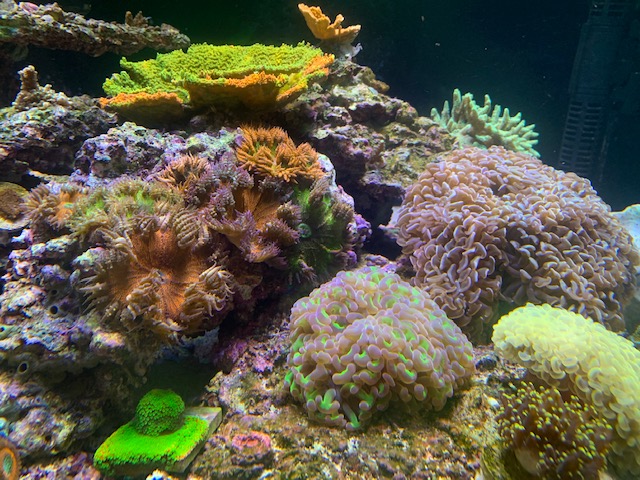 You can cross out other fish. Only your wrasses matter. I think we all can sing the Money Pit song

Pics are up. Note my pics are taken with an older Iphone and an orange filter.Does a reasonably representative job, but obviously colors don't pop and aren't quite true. For one thing it makes y sand look dirty, and it's not! It's pristine dammit! All in all, I'm pretty pleased with the tank considering it's age and the early difficulties. Now it's just a matter of giving all the SPS time to grow out. At that point I may reduce some of the LPS in the tank, but for now it gives the tank lots of color, movement, and a sense of fullness in some areas.

So the bars are the RMS Radion Mount lights re-purposed for the Orphek's. Unfortunately, with a Eurobraced tank there's no great solution for Orphek's. They do in fact bend slightly in the middle (not as bad as the pic makes them look, but there is a bend.) It worried me at first, but as the months have gone by and there's been no change in the bend I'm no longer concerned, and frankly it's not a bad look in person. It also angles some light into the corners and sides. Still, at some point, I will have some black steel quarter in or so bars cut and cinch them to the RMS steel in order to stiffen them.

ashburn2k said:
Switch your light rail with 80/20 that bend sure doesn’t make me comfortable

Please elaborate your triton method.
A pic of your sump, too.
Thx