BARcard
Time to update:
Well, it's been quite a journey since my last update.
I bought a replacement tank because my tank was just getting too crowded. The tank was purchased used from @enaldy and he sold it to me after he bought it from @Flagg37. It was a Leemar tank with 0.5" thick glass and 150 gal. It came with a DIY acrylic sump and DIY stand. The stand was built very well; it was very heavy and solid! Tank dimensions: 48L x 30W x 24H. The stand was stained a dark wood color and this did not match my family room, so unfortunately, I had to change the look of the stand. I also felt that the doors were not user friendly and so I had to make plans for different doors. My wife wanted the stand to be similar to the old stand that I had, so I removed the doors, sanded, primed, and pained the stand, and added molding and trim. I placed shower liner inside the stand and placed the sump back into the stand. I also built a DIY hood for the top of the tank because my wife hates the light spill and the "blue room" effect. The 150-gal glass tank is quite heavy and I don't have many friends or family readily available to move the tank. It was really difficult for me to find help to move it from my garage to my back yard and then into my family room. Once I got the tank on the stand and into the family room, the wife complained about the look of the glass tank with black seams. She is used to having acrylic tanks with rounded corners and no visible seams. I've always had acrylic for the past 30 years. But I explained that glass is easier to care for and less prone to scratching. She vetoed the tank and asked for less visible seams. So I ended up ordering acrylic from Midwest Customs. It was a great experience and the price was good compared to other custom acrylic builders. So, when that finally got delivered, I resumed my plans for a tank swap in March 2020. I bought another Kessil AP 700 to go with the original one I was using. I kept the same Geo calcium reactor that I have been using for the past 15 years and the Reef Octopus 150 skimmer. The tank transfer was done fairly easily because the new tank was going in the same place as the old tank. I simply removed 50% of the water from the old tank and put it into containers and then slid it over about 5 feet and then slid the new tank into place. I then refilled old tank with new salt water. I used the old water in the containers for filling up the new tank. Of course, I topped it off with some new salt water too. The next day I just moved stuff from the old tank and placed it into the new tank. Both tanks have Majic Sliders under them to make it easier to move when most of the water is drained.

All my fish did well and didn't seem to be stressed at all. I tried to be sure I moved all the CUC too. I had a lot of hermit crabs and some cowries that I collected over the years from Hawaii in the system. I put down 2" of Caribsea Live Oolitc Sand in the 150 gal. Even though it was live sand I ended up rinsing it a bunch of times before I put it into the tank because I didn't want to risk a cloudy tank for a long time. It seemed to work out for me because it cleared up in a few days. I had a GFO reactor that I always ran that I resumed in the new system.

The tank transfer took place in March but it took me a year to finally order the doors for the hood and the stand. My wife was so sick of looking at the "blue lights". I ordered the doors from Barker Doors online. They came in the mail in great condition. They were pre sanded and I just primed and painted them.

I also have an Apex classic that I bought used that I have tried to set up but can't seem get the outlet plugs programmed. So, I'll need to do more research online about doing a reset. Right now, I can see temp and pH on Apexfusion.com but that's about it.

My plan to aquascape was to use my old live rock (some original Figi and TBS) that I have been using. I wanted less rockwork and more open space for fish to swim. My old tank had the typical old school rock wall look. The current aquascape is okay, but I'm not totally sure I like it yet. I still feel like I need more rock work for coral placement. Let me know what you think of the aquascape.
If you look from above it looks like a big oval with a lagoon in the middle. Most of the rockwork is not touching the sand and there are a lot of small holes, caves and swim throughs. I tried to make it such that all 3 sides can be viewed as if it was the front of the tank.

Fish list: a pair of spawning ocillaris clowns, a pair of spawning green mandarins, strawberry basslet, yellow tang, blue hippo tang and a toby puffer.
I recently placed a yellow spotted baby box fish into the tank after QT for 1 mo. It did well for a couple days and then it started to hide in the rock work and only came out for food. Then a few days later I never saw it again.
I have a big melanarus wrasse that @twistted gave me. It's in QT now and recovering from a beating his wrasses gave it. I plan to put into the DT soon.

Please let me know your thoughts.
Thanks for reading this long post. 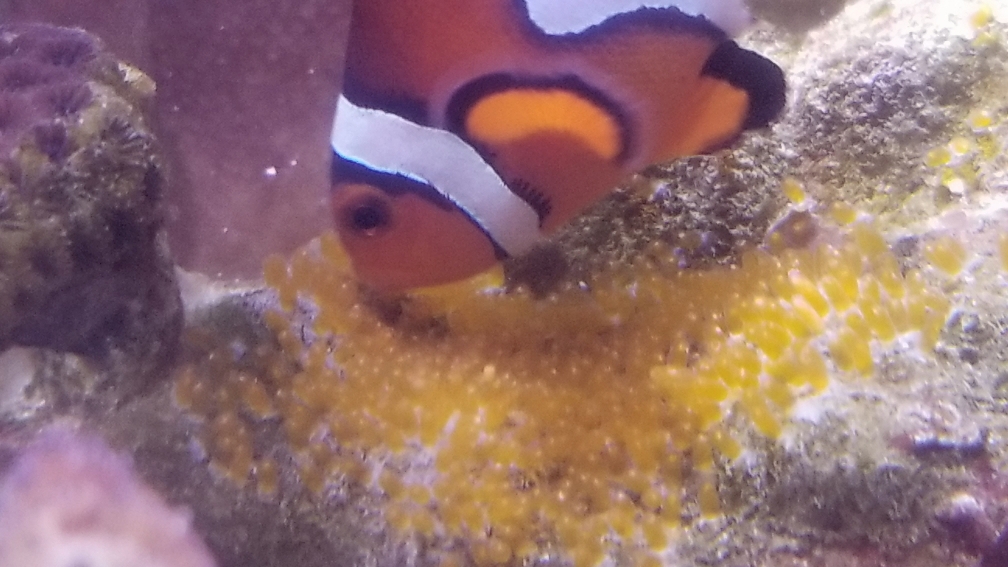 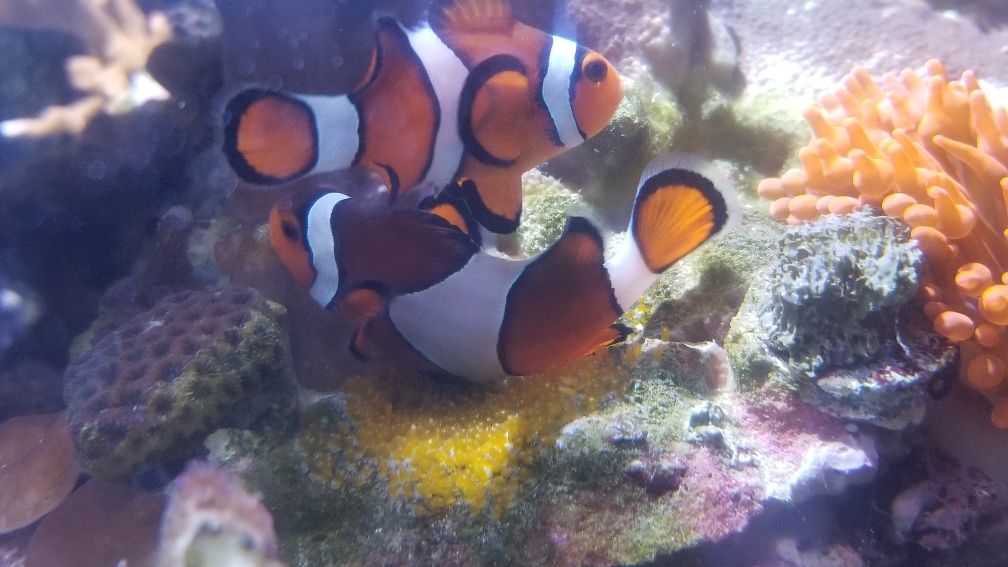 BARcard
Toby! He's been in the tank for about 3 mo and is a model citizen. 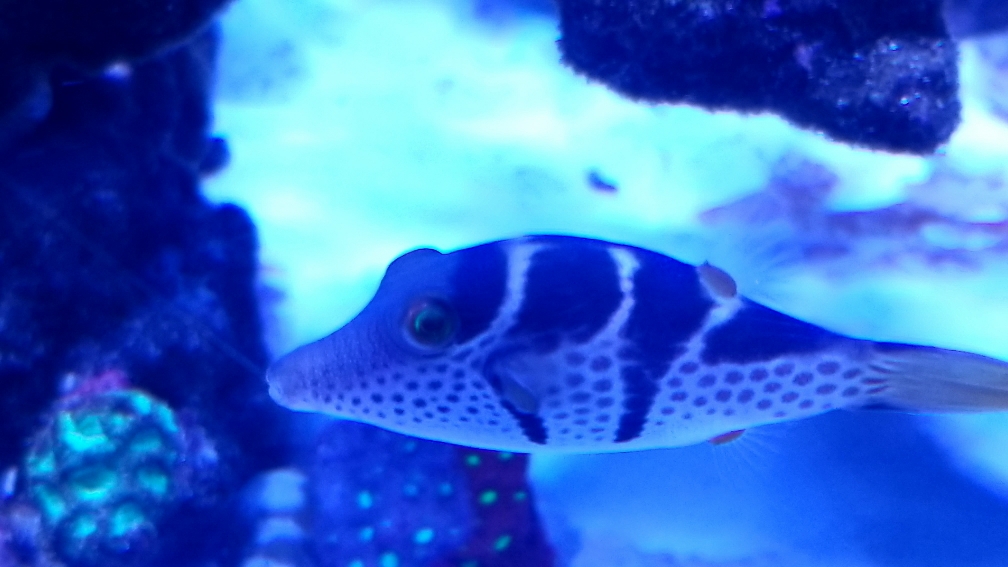 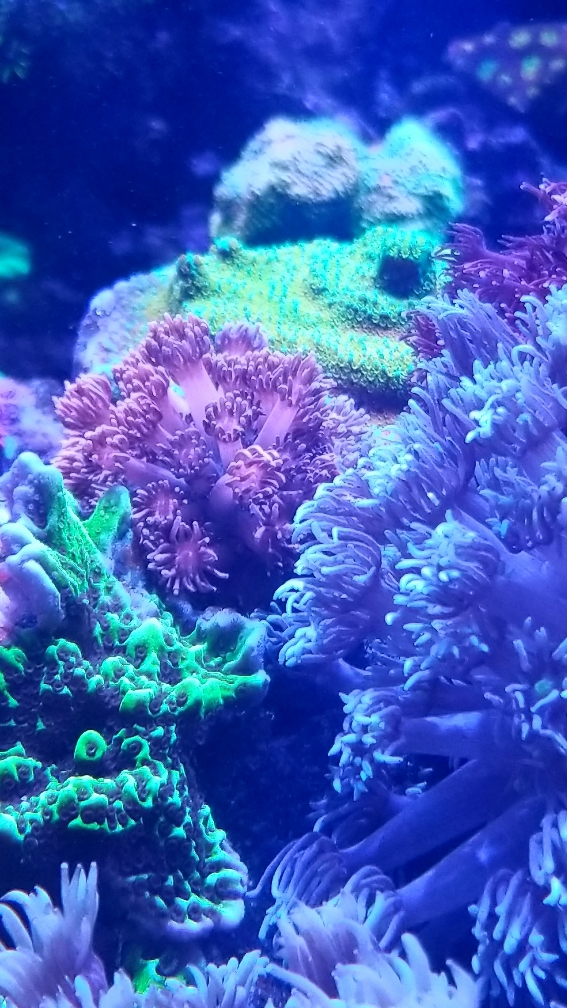 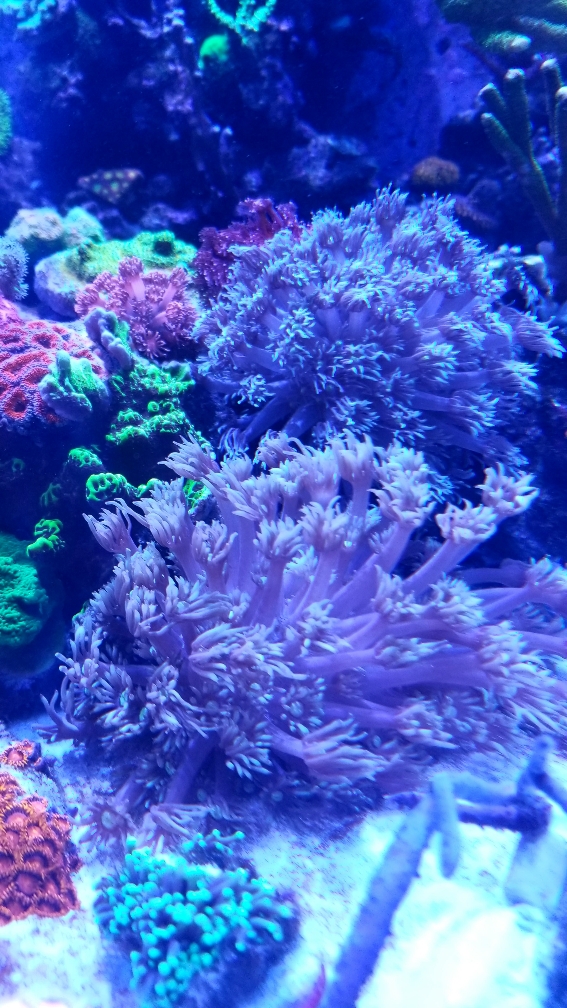 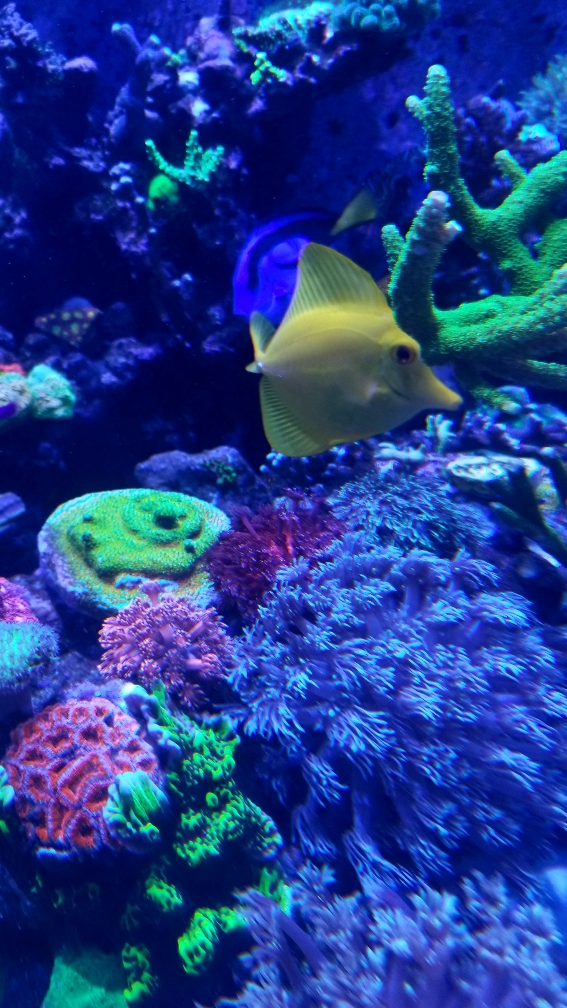 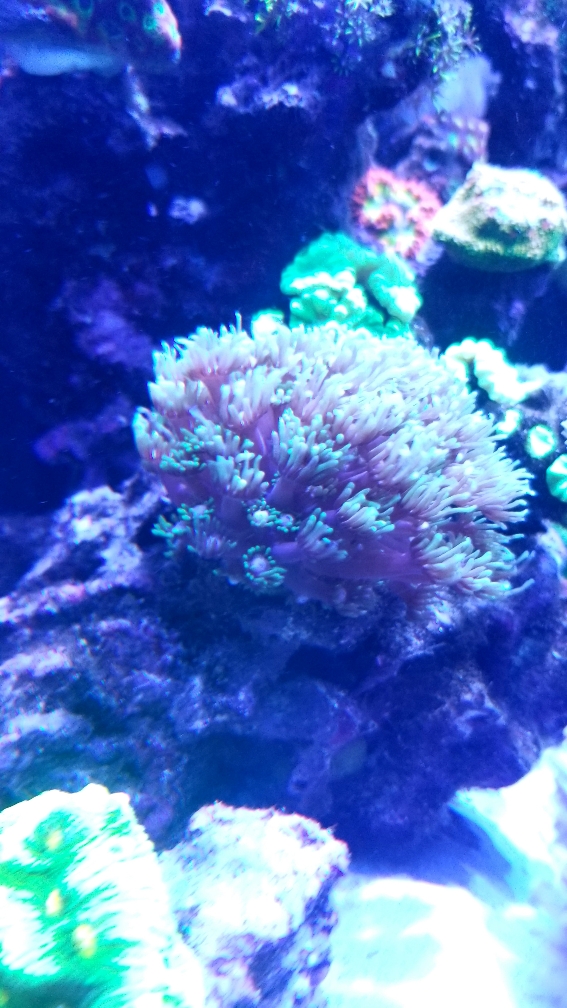 BARcard
Video of the tank today.

BARcard
nice - you don't have issues keeping goni's? I never could keep before.

Apon said:
nice - you don't have issues keeping goni's? I never could keep before.
Click to expand...

I never had luck with them before, but within the last year I've had good luck. I think it depends on the strain you get. The wild ones from the LFS might be harder to keep. The ones that come from frags of other reefers are the ones I'd recommend. 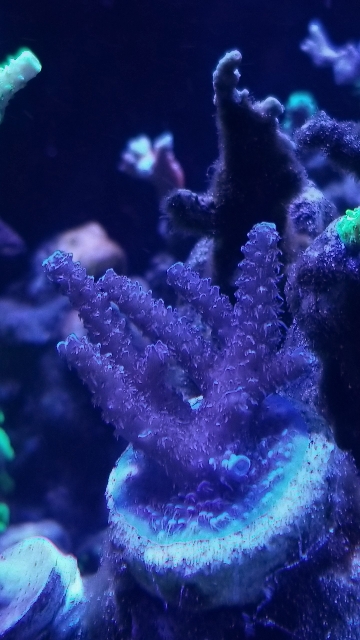 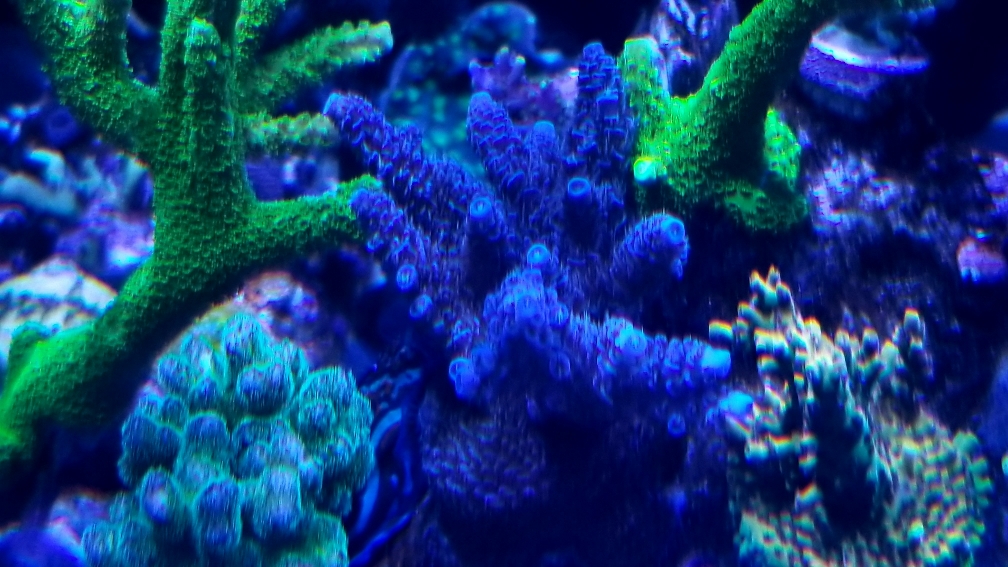 So cool. How do you keep them alive? Did you get captive breed or you constantly grow copepods?

BARcard
Thanks @Alexx. I just bought wild caught mandarins. They were eating brine shrimp in the LFS and so I bought them but at separate times. When I bought them I knew they were male and female but didn't know they would spawn. The male only eats pods and I have a lot of pods. The female eats pods and blood worms and other things I feed the fish. I'm not sure of her exact diet but she is super fat and always looks pregnant.

dochou said:
Thanks @Alexx. I just bought wild caught mandarins. They were eating brine shrimp in the LFS and so I bought them but at separate times. When I bought them I knew they were male and female but didn't know they would spawn. The male only eats pods and I have a lot of pods. The female eats pods and blood worms and other things I feed the fish. I'm not sure of her exact diet but she is super fat and always looks pregnant.
Click to expand...

Great Content! I also own a spawning pair of wild mandarins! Been struggling to get footage so I appreciate the camera work. How long have you kept your pair?

Sent from my SM-G955U using Tapatalk
Click to expand...