Staff member
I figure I’m way overdue to write up my current tank, which I started in the Summer of 2017.

I’ve been reef-keeping continuously since about 2000, and have had 3 tanks sequentially during the time, each progressively larger and more complicated (and more successful). My first was a 45 gallon bow-front without a sump, with HOB fudge and HOB skimmer, almost no testing, some hand dosing by guesstimation but mainly water changes, mostly softies and easy fish. Several of my current fish are from that first tank. My previous tanks were pretty limited by time and cost constraints, largely on auto-pilot, but still a lot of fun.

With this tank, I decided to try to “do it right” by figuring out and using some of the best options in each category, and giving myself a larger budget to match. Since it’s in the family/TV room, aesthetics, tidiness, and quiet running are almost as important as function. My wife and I decided I’d have only 1 tank, so I wanted to have lots of diversity within a single mixed reef tank, which has it’s own challenges.

I’ll start out with some pics from a couple days ago right before I changed out my lights. I’ve done a lot of research, tinkering, experimentation, and changes throughout the process, some of which may be interesting to people. In upcoming posts I’ll fill in lots of other details (not particularly in chronological order) as I get the time.

Staff member
Some iPhone pics I snapped just before I switched over my lights this week: 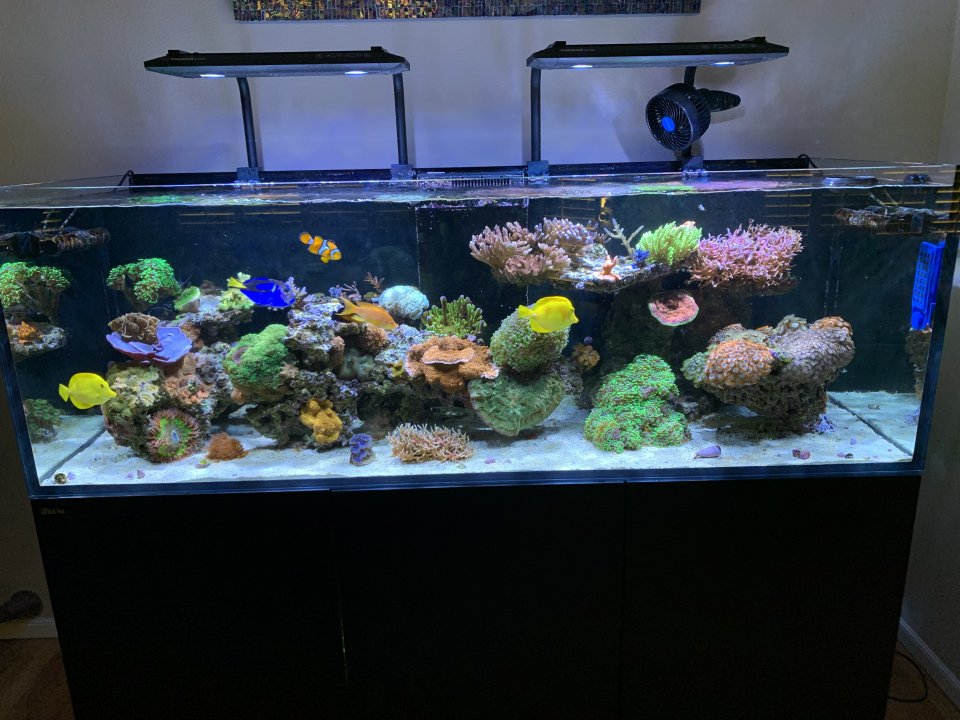 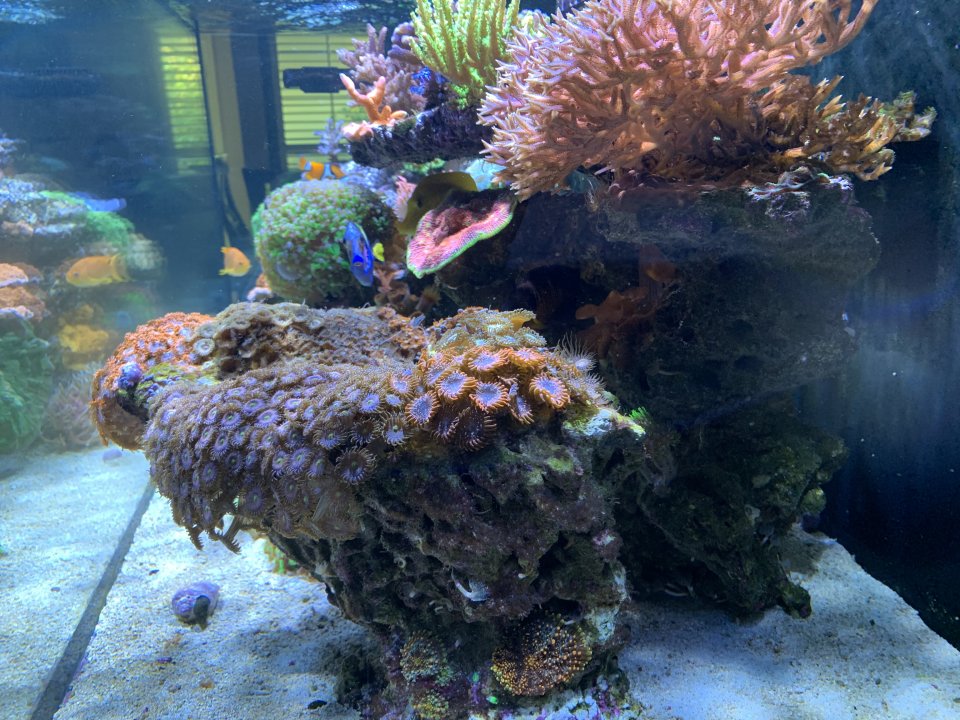 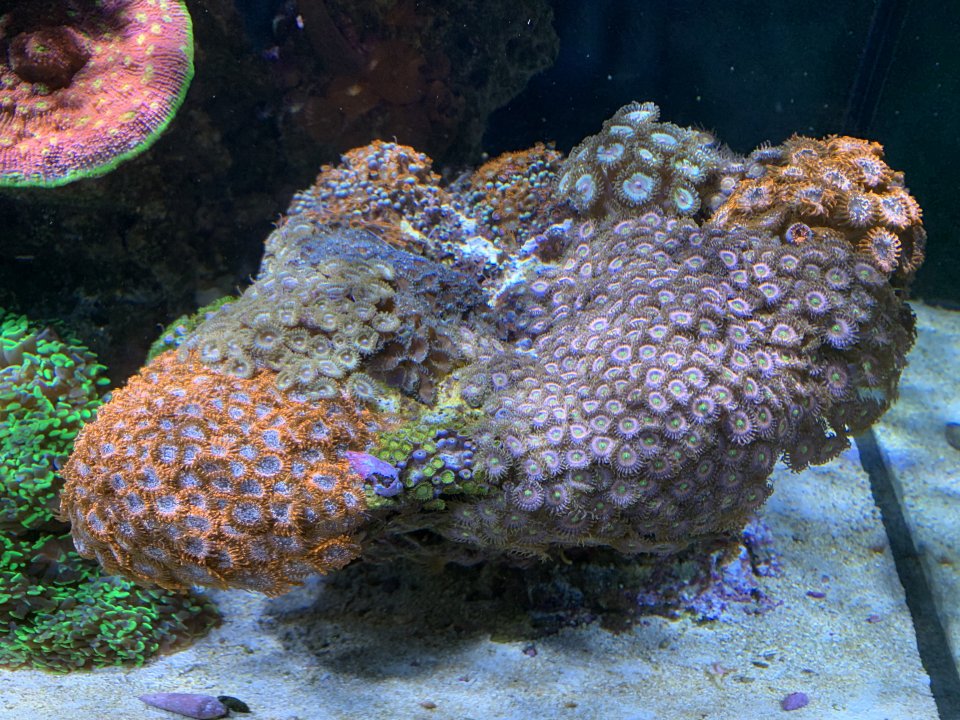 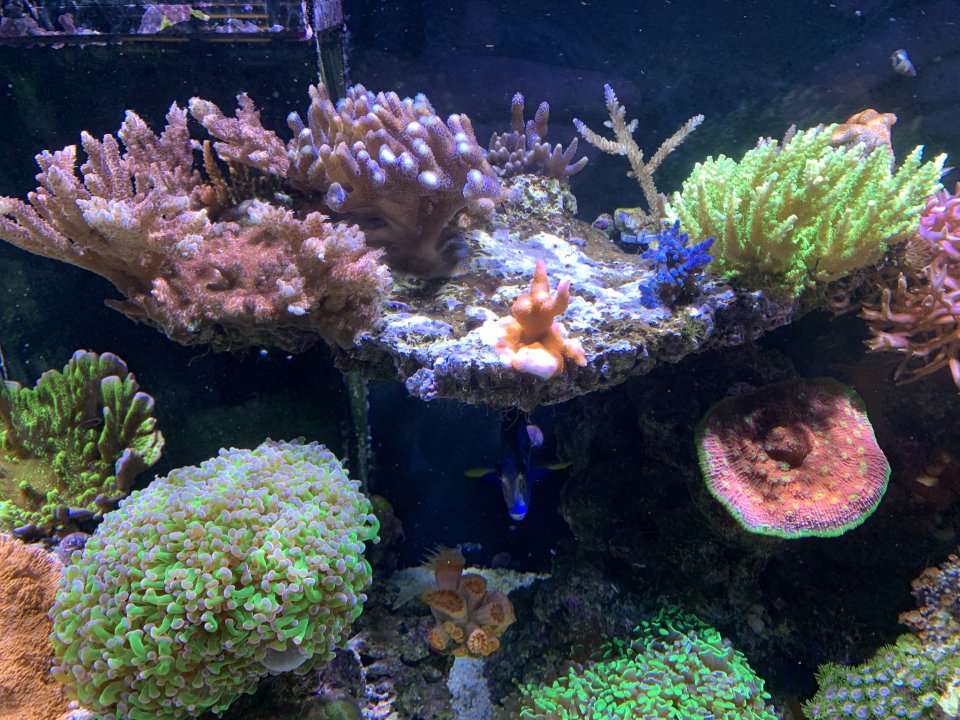 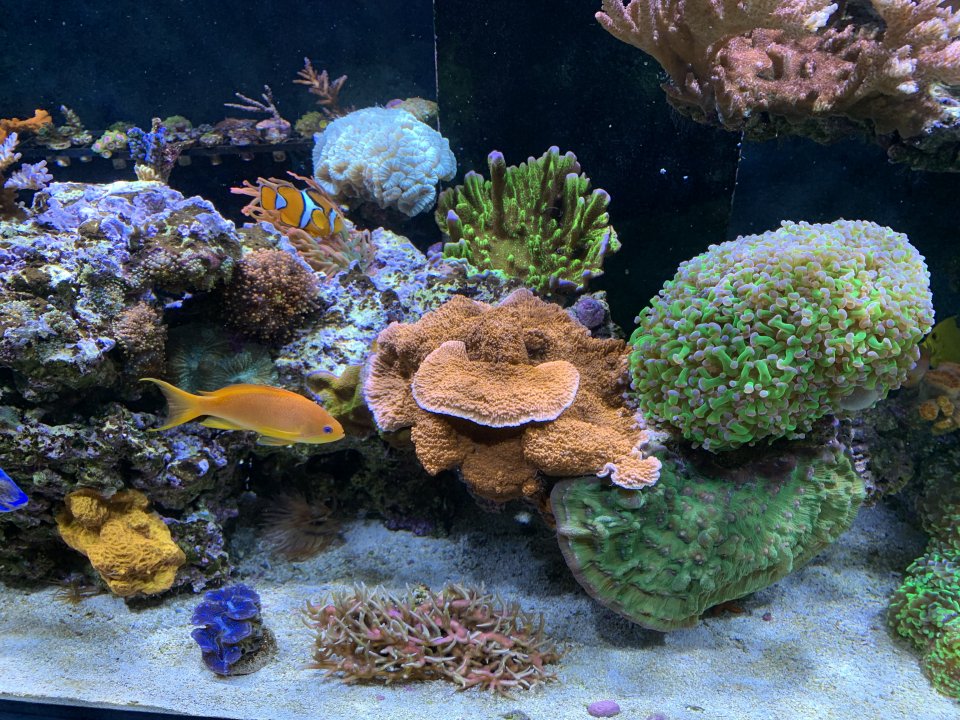 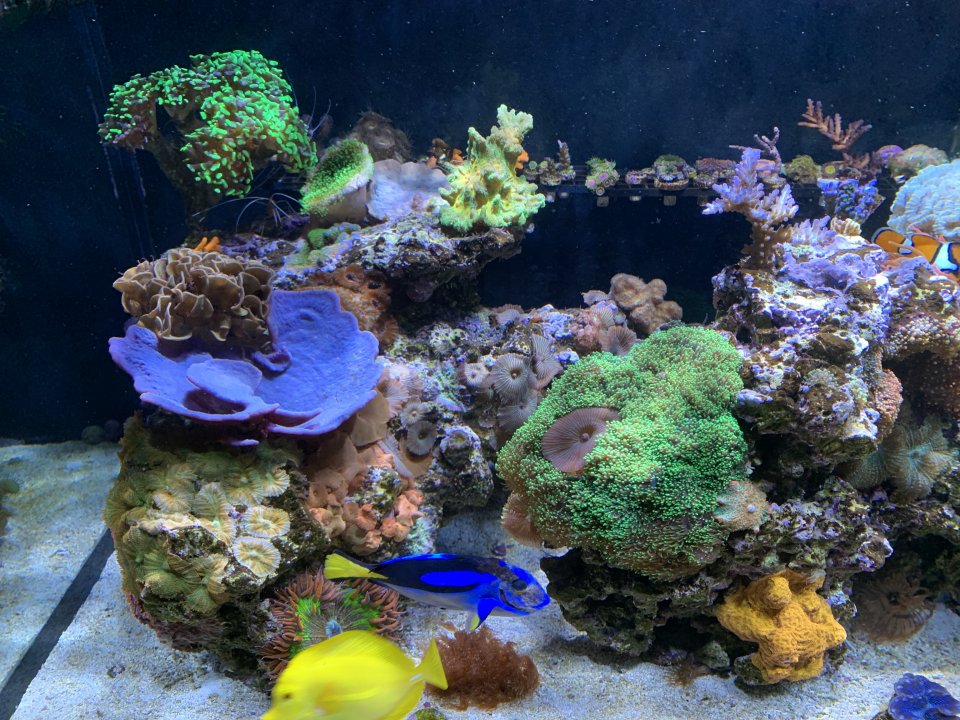 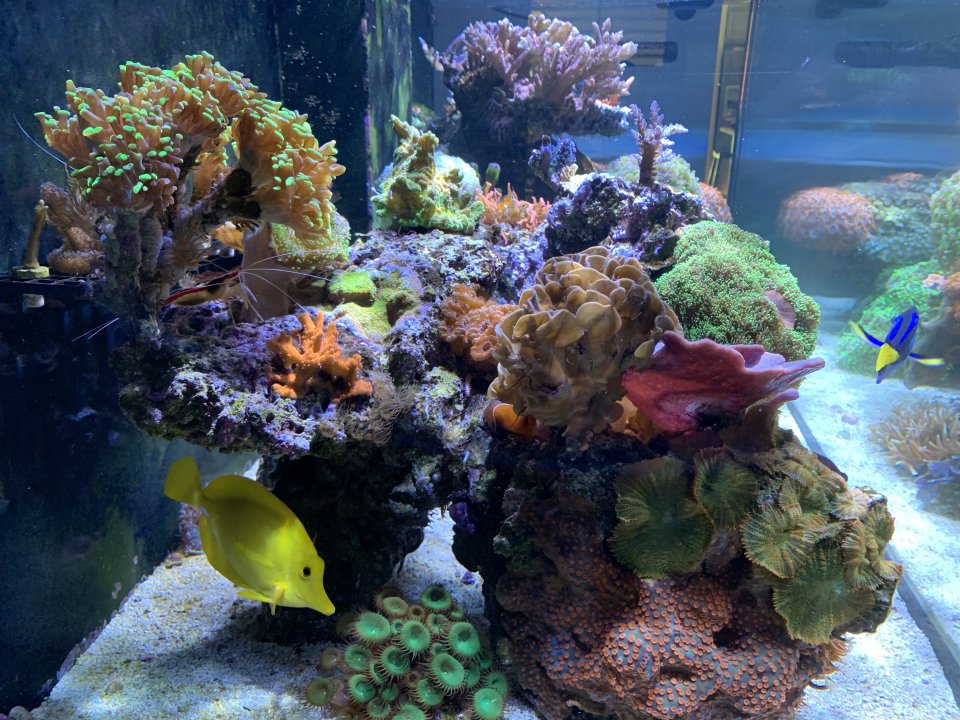 nice! No wrasse in your tank? Maybe that’s why I can’t keep zoas in my display tank...

Pretty nice John!
I love the shelf rock with the acros on top, that was my dream aquascape!
The zoa garden a nicely done!
E

Beautiful! I remember the tank was almost empty and now it’s full of life.

Vibrant! Things are looking great!
What is that green monti (?) with purple tips - center, back? Nice chalice - red with green edge. Is that a pavona - at left, leaflike growth? How about that yellow-orange stuff on the rock to left of the beautiful clam?
So you mostly have areas of similar-type corals? Is there different light or flow, say on the SPS?
Will be intresting to follow your future posts about the switch to the new lights...

Staff member
Looks good. A true mixed reef. Much more grown in than when I saw it a year ago. What level do you run your nutrients?

MolaMola said:
What is that green monti (?) with purple tips - center, back?
Click to expand...

MolaMola said:
Nice chalice - red with green edge. Is that a pavona - at left, leaflike growth?
Click to expand...

I think you’re talking about my purple photosynthetic sponge. It was a hitchhiker but has grown out nicely and I like it. I’m going to be trimming it back soon though because it’s been bugging the corals around it. If my fragging is successful you can have one if you’re interested.

MolaMola said:
How about that yellow-orange stuff on the rock to left of the beautiful clam?
Click to expand...

Jack O Lantern Leptoseris. I love the fine detail in that one when you look at it up close.

MolaMola said:
So you mostly have areas of similar-type corals? Is there different light or flow, say on the SPS?
Click to expand...

Yes, sort of. There’s more light and flow higher up in the tank, and variable areas of both in the different sections/crevices/sand. There’s definitely trial and error involved, and when something is successful somewhere I usually leave it.

MolaMola said:
Will be intresting to follow your future posts about the switch to the new lights...
Click to expand...

Wlachnit said:
Looks good. A true mixed reef. Much more grown in than when I saw it a year ago. What level do you run your nutrients?
Click to expand...

I run them pretty low, like nitrate less than 2 and phosphate less than 0.1. But I don’t obsess about it. I feed a lot and export a lot and test for those infrequently, like maybe twice a month or if I see an issue. When they creep up I dose a little NOPOX, and if I’m getting residual unbalanced phosphate (that happens with NOPOX in my experience) I mix some GFO in my carbon. If they bottom out I feed a little more and skip the NOPOX.

Pretty sure it’s an Echinophyllia chalice. I think it would be considered a type of watermelon chalice based on coloration, but I’m not sure of the fancy name.

I think I got it from @fishdoctor when he hosted a fragging event in 2017 (unless I’m remembering a different chalice). Maybe he knows the name? Mike, you’ve asked me before, and I’d like to figure it out since it’s really a beauty.

Staff member
I think that’s as close as you’ll get. Looks nice!

Staff member
A few close-ups with the iPhone 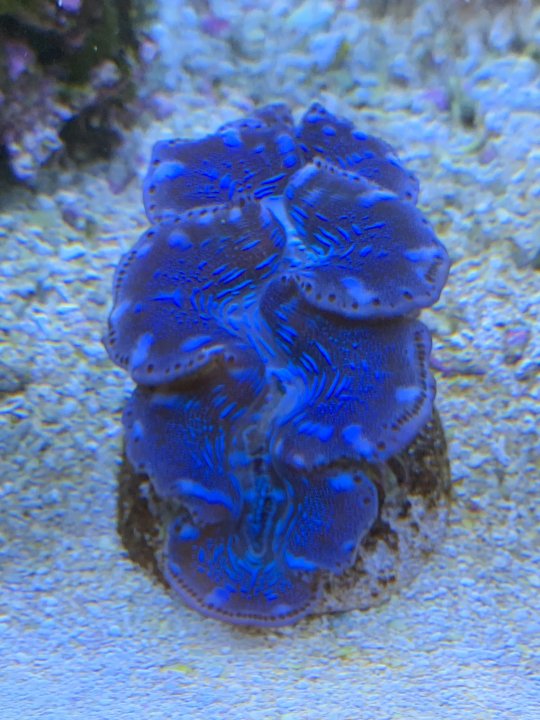 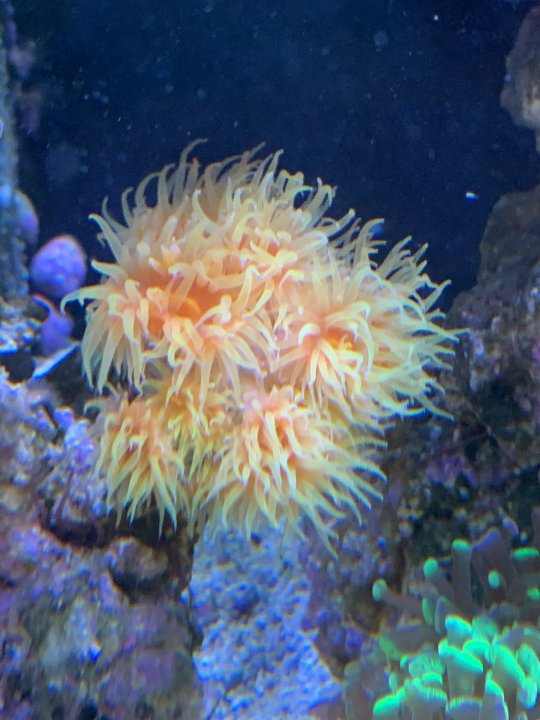 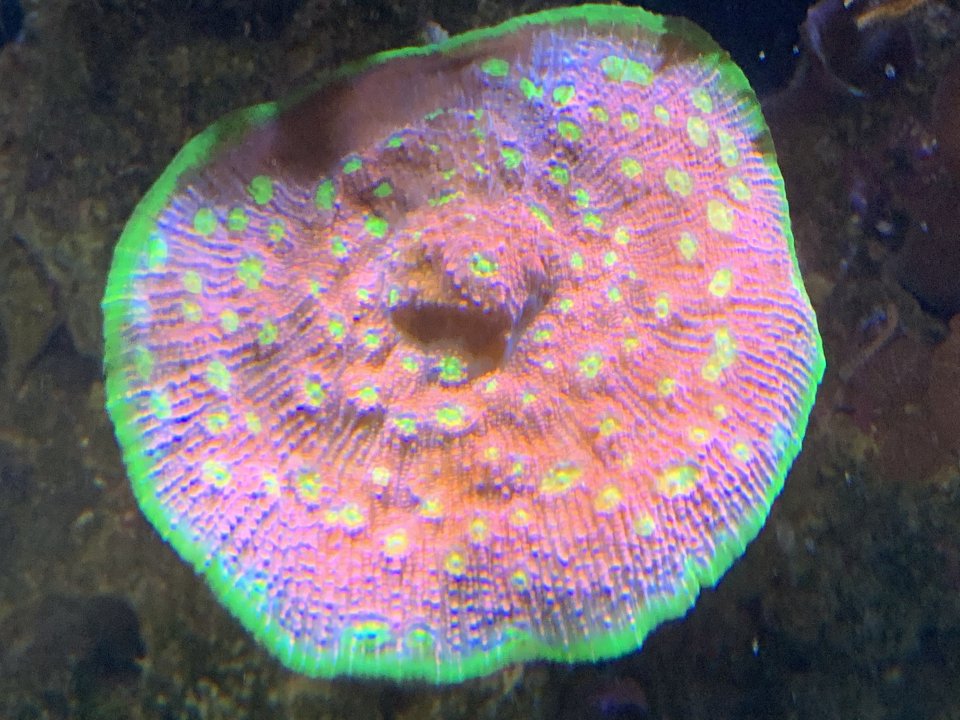 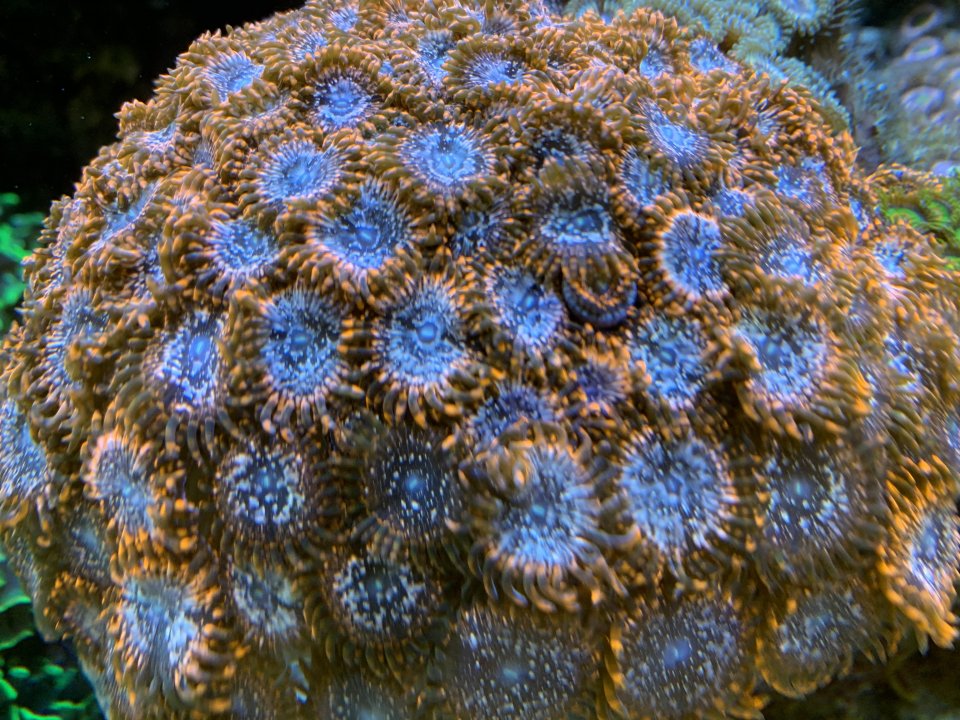 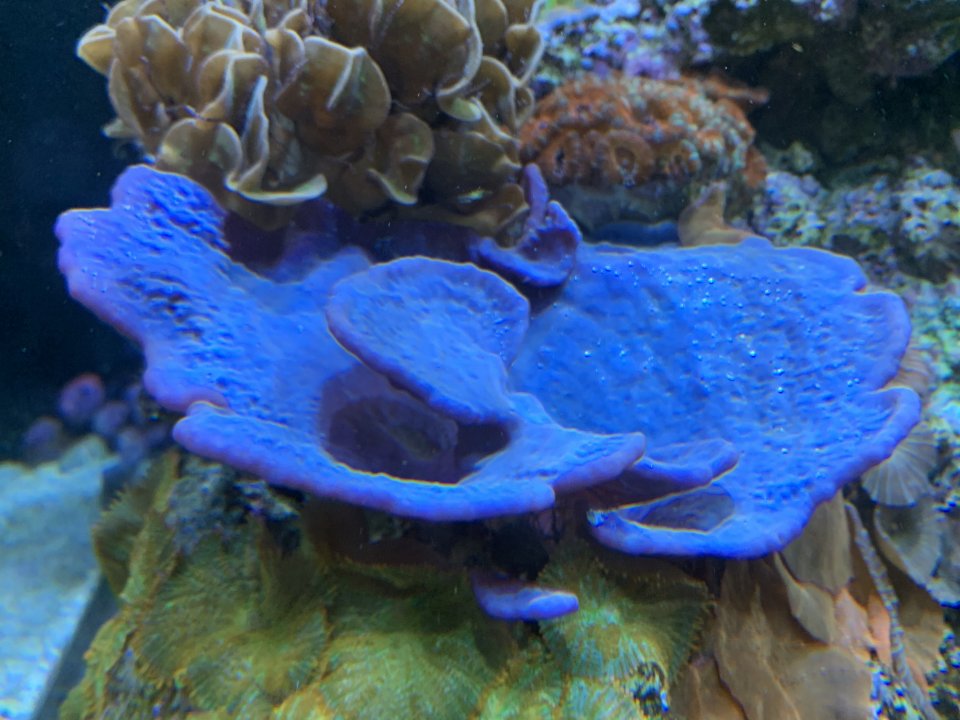 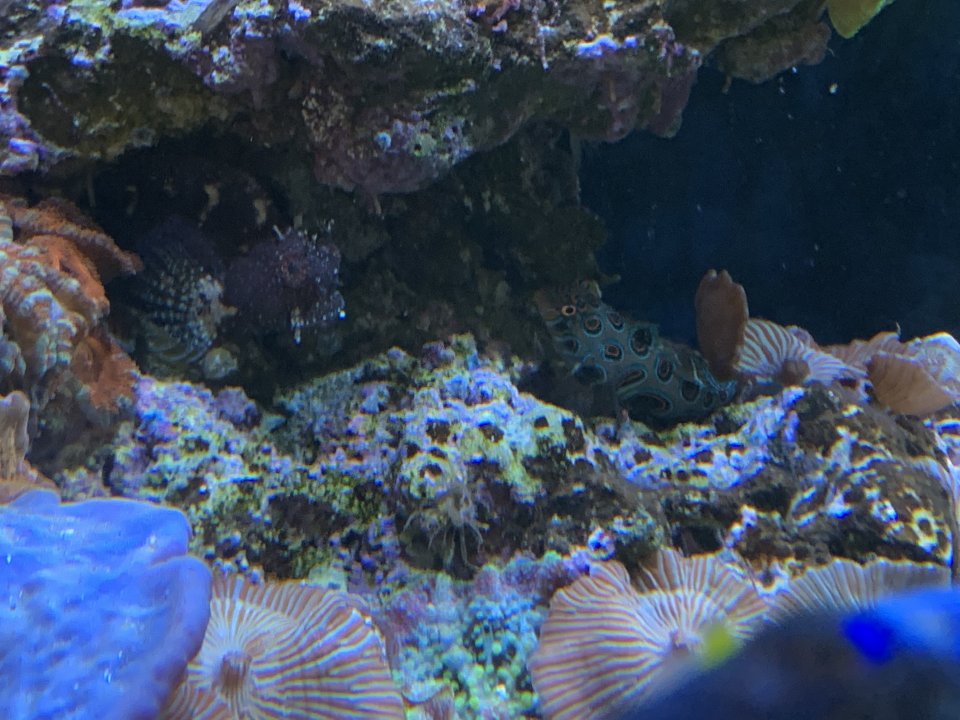 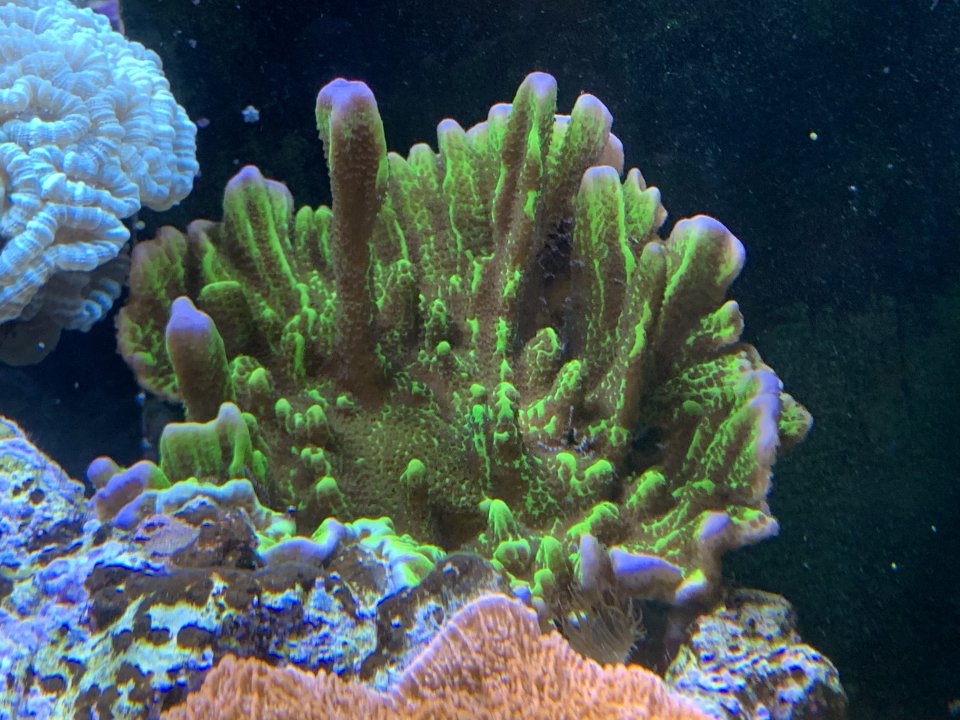 What is the leafy looking stony coral above the purple sponge?
I am really drawn to the photos - so colorful without too much blue light

MolaMola said:
What is the leafy looking stony coral above the purple sponge?
I am really drawn to the photos - so colorful without too much blue light
Click to expand...

Thanks, I have it bluer in the mornings and evenings and whiter during the day. Different corals stand out with different lighting.