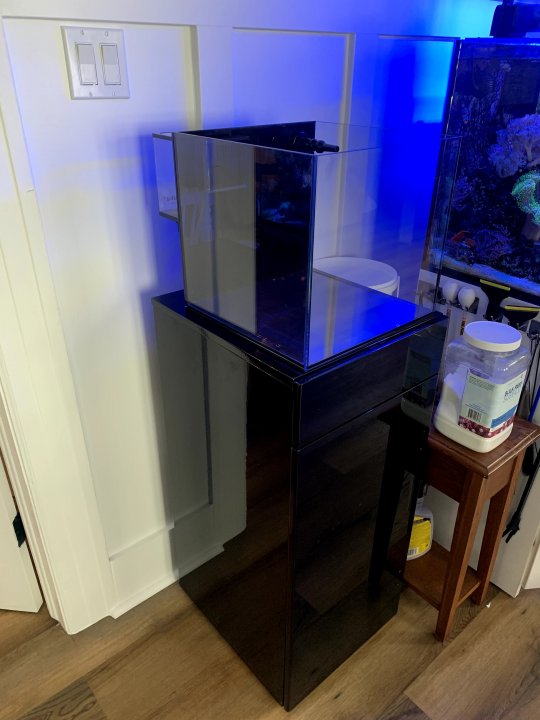 This is my new project. It's a 14" cube with an external overflow box. I want to plumb this into the sump of my Red Sea Reefer 250. My original motivation was that I'd like to add some mangroves and/or macro algae for nutrient control, and maybe get rid of my algae rector, but I couldn't figure out where to put them. So why not add a new display for them? Still not sure exactly what I'm going to do, but it will be some combo of mangroves, macro algae, a dedicated place for frags so they aren't in the main tank, and/or a place for clams. No fish, because I don't want a lid.

This will be exciting because it's the first time I'm doing my own plumbing. I want to run colored schedule 40 PVC pipes from the drains into my existing sump. Then I want to make a return manifold for the main tank. This is another project I've been wanting to do for a while, to get rid of the pumps for my carbon and algae reactors, and I'd rather do it now than add yet another pump as a return for the new tank. I haven't quite decided how to attach the new return to the manifold, but I might just go with a long run of soft tubing.

All of this will leave the new cabinet free as storage space, which I can certainly use. Unfortunately I managed to start the project with a bad omen. When I put the cabinet together, I didn't realize that it came with 2 different screw sizes. When I attached the hinges, the screws went through the door and into my floor. When I realized this, I started swearing--a lot. But as it turns out, you can't really see the marks in the floor, and the holes in the door annoy me, but I can live with them. Fortunately my floor is synthetic (it just looks like wood), and it kind of self-heals.

All of this plumbing is still in the drawing stage, so this tank won't have water for quite a while yet. But I'm excited to see what happens.

BARcard
Following along! Want to do this someday.
K

BARcard
TLDR: How do you stop a bulkhead from leaking?

Been a while since I updated this project. I've finally (mostly) finished the plumbing. My new manifold is working great, which is exciting. I just got removed two pumps for good. The only problem is that both bulkheads on the Fiji Cube 11g leak slowly. In both cases I'm using the rubber gaskets that came with them, and I've tightened them pretty hard. Do I need to use plumbers tape? I feel like the leaks are coming from between the glass and the nut, not through the threads. Do I need to use silicone around the edges? 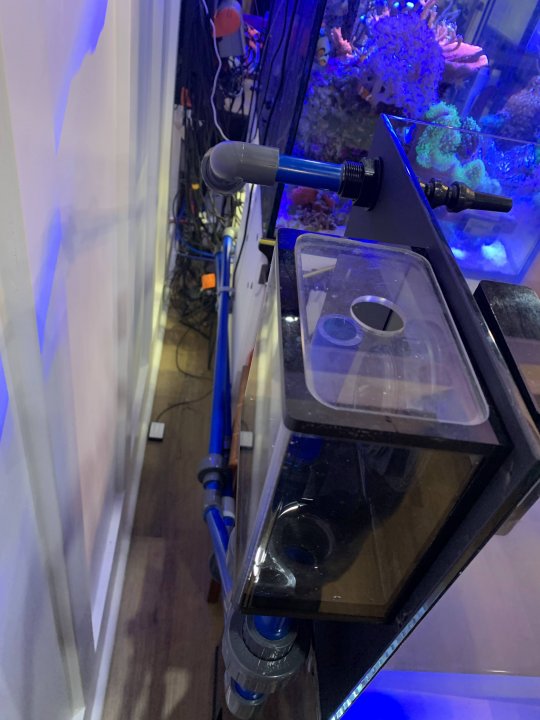 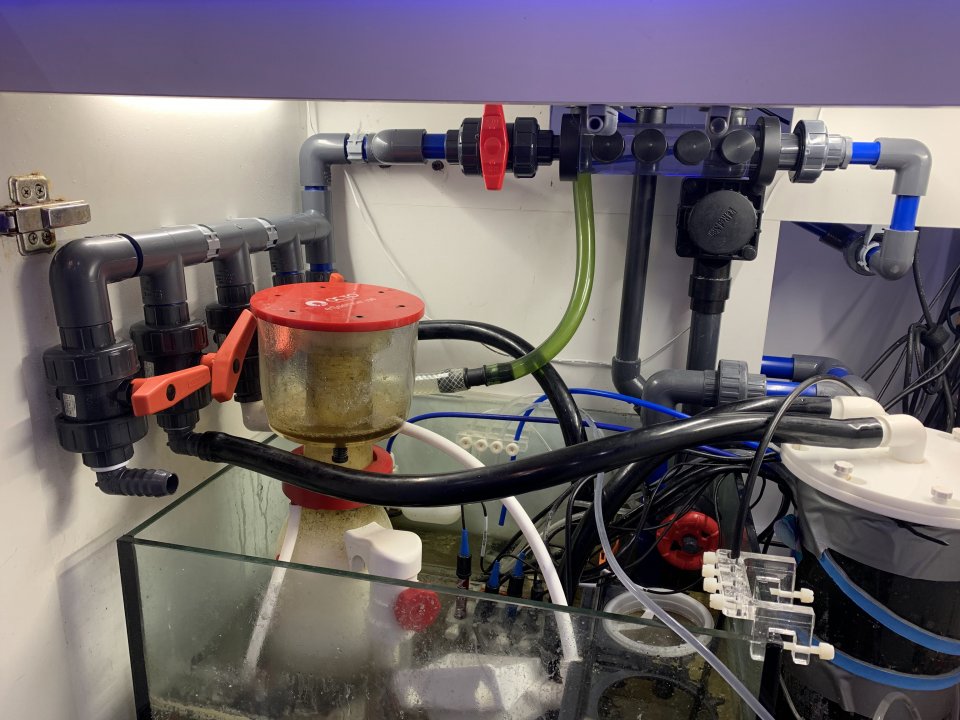 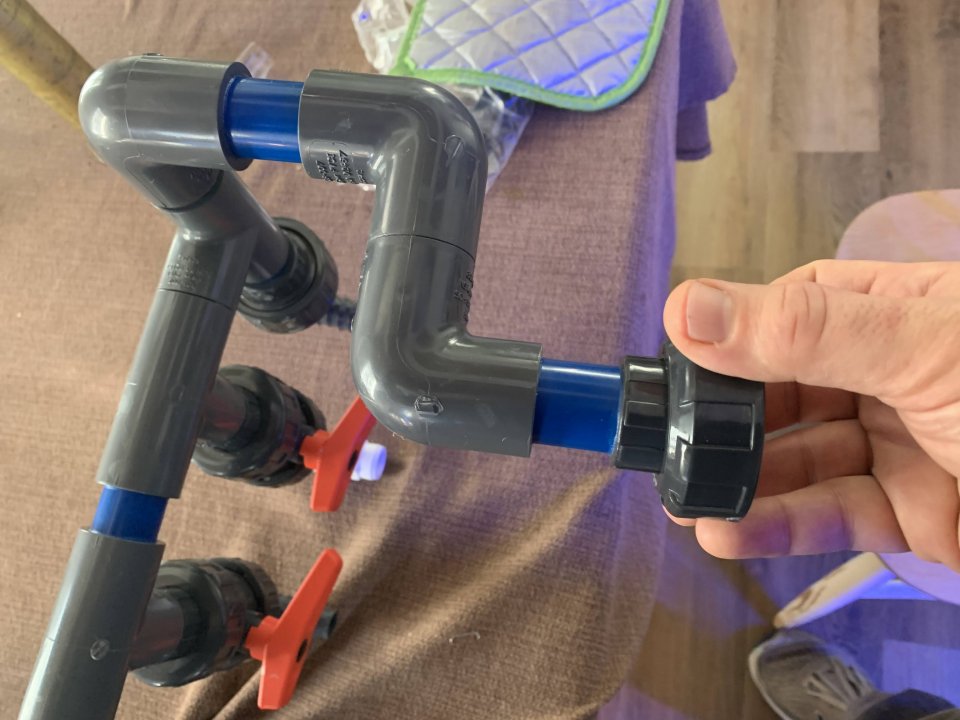 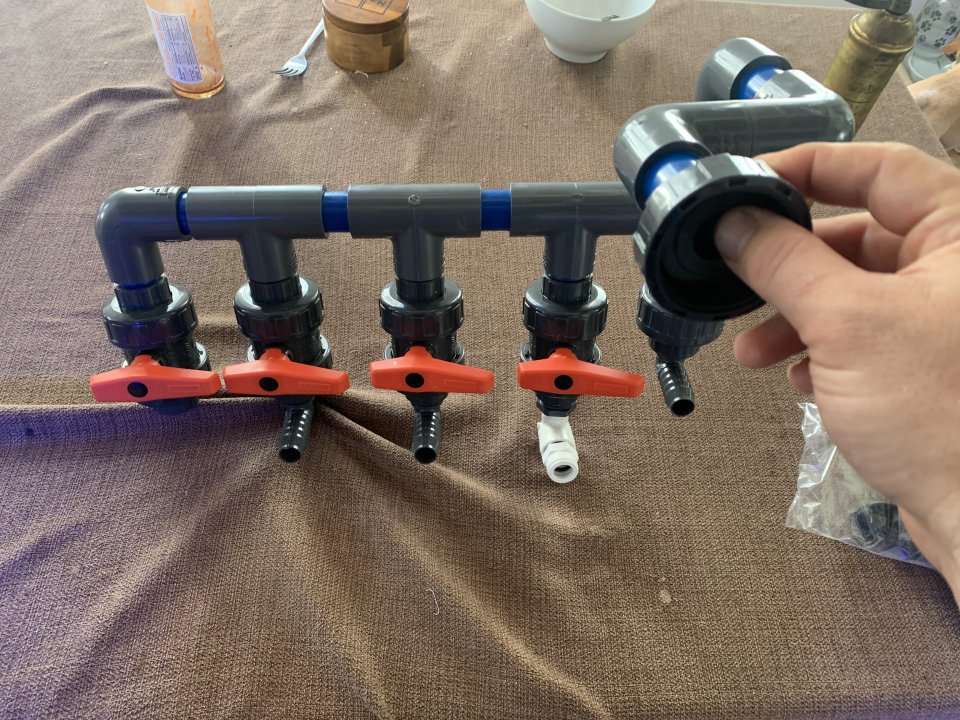 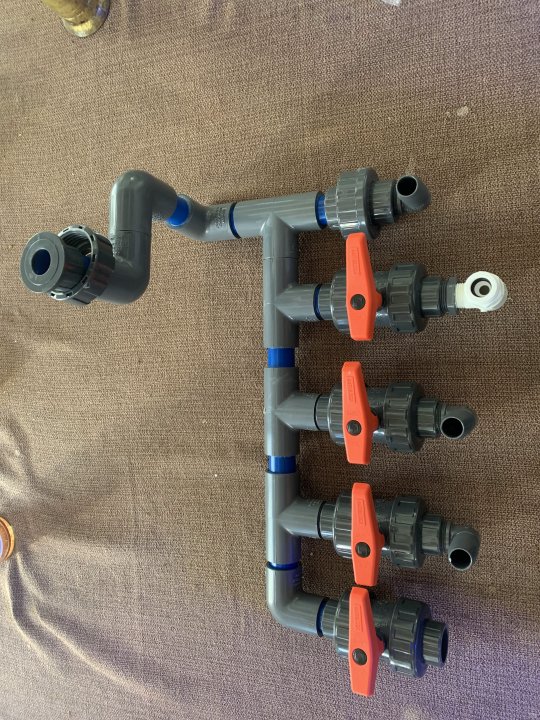 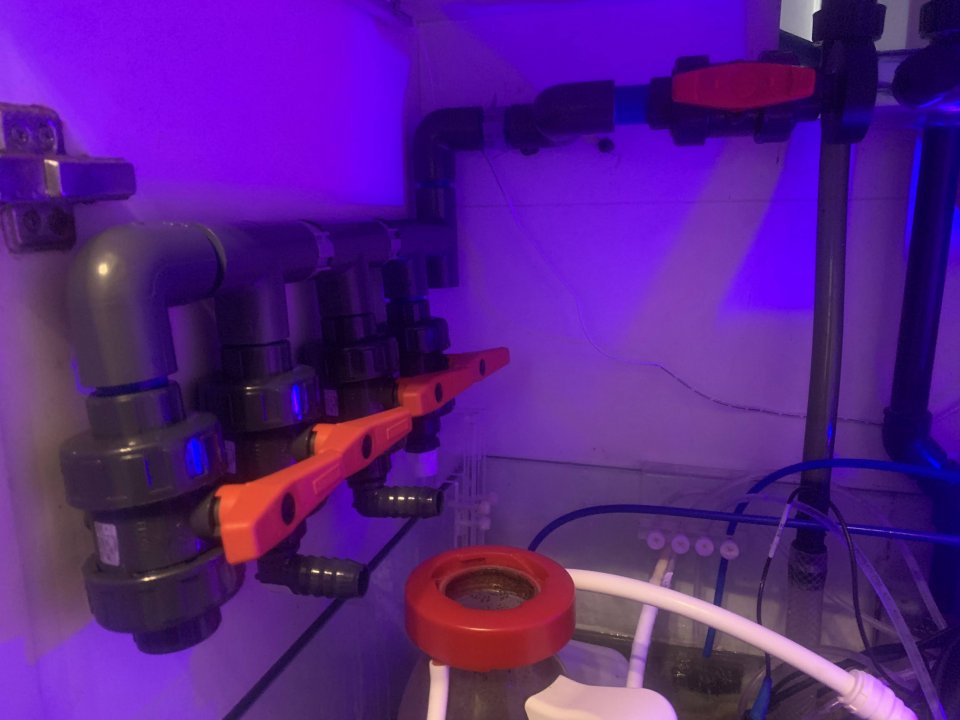 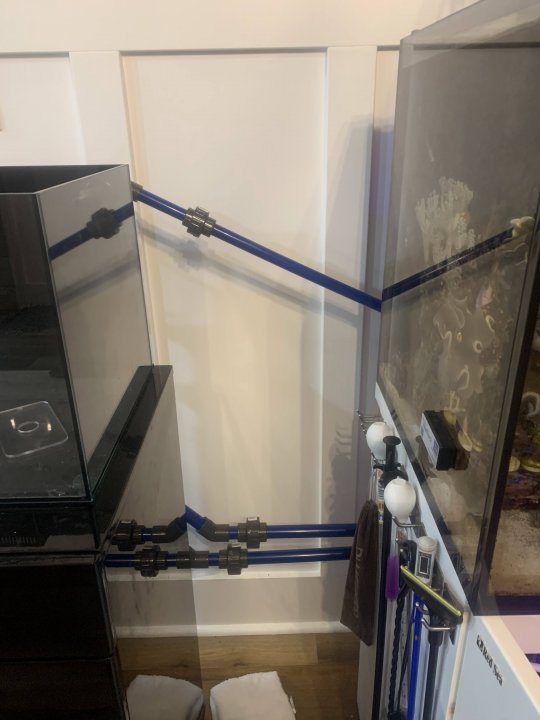 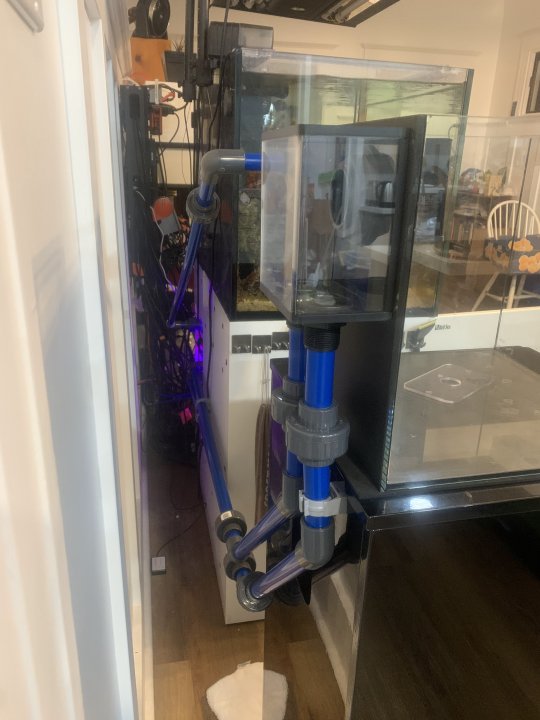 keithschon said:
TLDR: How do you stop a bulkhead from leaking?
Click to expand...

Plumbers putty/pipe dope or silicone. People say you don't need these to stop leaking and simply the large rubber o-ring will work, but in my experience, you need more for the long term.
K

H2OPlayar said:
Plumbers putty/pipe dope or silicone. People say you don't need these to stop leaking and simply the large rubber o-ring will work, but in my experience, you need more for the long term.
Click to expand...

BOD
BARcard
Also if you over tighten you can smash the gasket out of the way causing the leak. I wouldn't use silicone.

BARcard
I'm trying to grow mangroves too. So I'm excited to see how you'll do this.

BARcard
Rubber gaskets shouldn't be tightened down overly tight. Just enough to have a good positive hold on them is enough and should allow them to perform the best and last the longest too.

BARcard
As others have mentioned, don’t over tighten. It will deform the gasket and cause leaks. What I do is hand tighten and then and extra 1/4+ turn with a wrench…never had issues with them leaking. I like how the 10 gallon is plumbed to the display. Are there any potential issues you might come across with a plumbing setup like this?
K

BARcard
Thank you everybody for the advice! I did finally get all the leaking to stop. And happy Thanksgiving!

The project is about done now. I'm using Miracle Mud as a substrate, as much as anything because of the visible contract to the coral sand in the display. I made a mount for two mangroves out of acrylic to keep them mostly above water, and to encourage their roots to grow into large baskets. I've moved all of my frags into here from the main tank.

I still need to sort out the lighting. I had a spare Kessil, which I've mounted high to encourage the mangroves. I'll be delighted if they grow enough that I have to suspend it higher. I'll put lights under the trees for the corals, and in case I move my derasa clam here (which I'm thinking about). I bought two 12" Reef Bright strips from BRS once their Black Friday sale started. Once they get here I'll start measuring PAR and decide whether that's enough and/or how much to dim them.

I'm really happy with my sump! Once I got everything switched over to the manifold, I pulled out two of the pumps I had been using. I've moved most of my probes to an Adaptive Reef probe holder. (I learned after I had bought it that having them at an angle would reduce their accuracy. Seems acceptable for now, but at some point I might add some more elbows so I can lower the probe holder.) Then I re-routed all my cords and dosing and sampling lines. Finally, I removed my DIY algae reactor--it wasn't in great shape, and hopefully the the mangroves can pick up some of the slack. The sump has not been this organized in ages, and maintenance is much easier. Of course it's still a rats nest behind the tank, which you can see through the opening on the right. I also got rid of my dosing containers and put murlock ports right into my 1 gallon mixing containers. That actually increases the footprint under the tank, but it's totally worth it to not have to refill them as often.

Dialing in the two tanks was easier than I was worried that it might be. It helps that I'm running both at fairly low turnover.

4 months is a lot longer than I expected this to take. I think the biggest culprit was using the fancy-looking pipe and fittings that I have to order online. There were several times where I had to stop working for a week while I waited for a new part, and if I could have used parts from Home Depot I could have continued immediately. Lesson learned.

I have a bunch of extra mangroves now. I'll keep them around for a bit in case I kill the two in my new tank, but I'll probably give them away eventually. 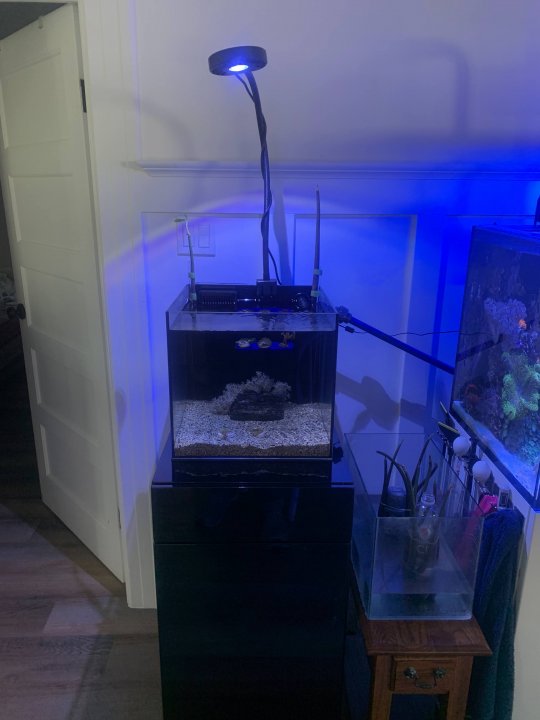 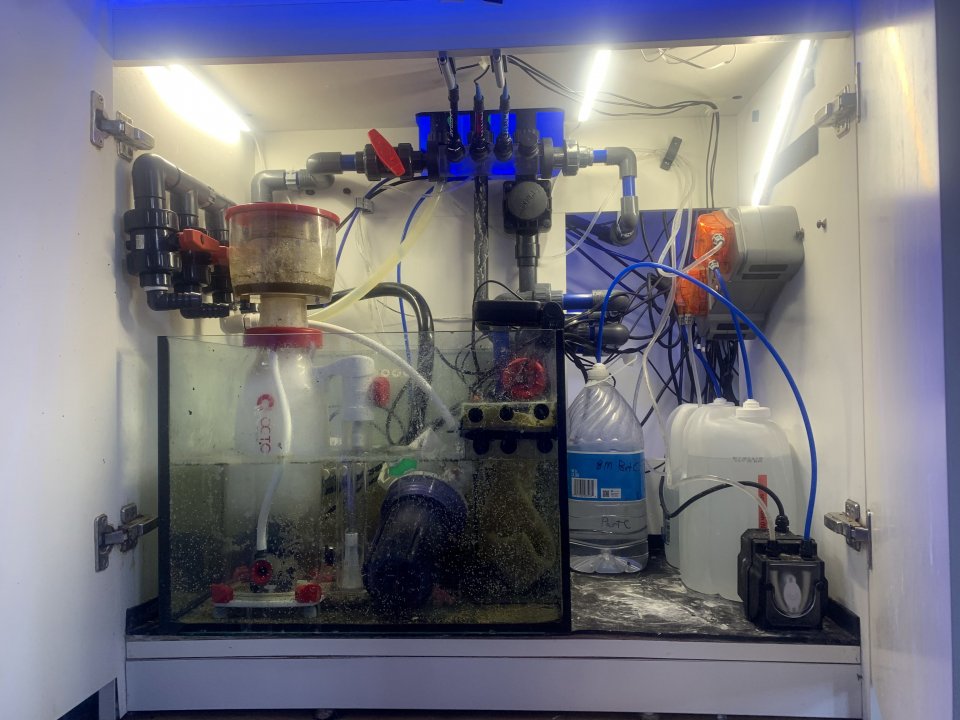 nanoguy said:
As others have mentioned, don’t over tighten. It will deform the gasket and cause leaks. What I do is hand tighten and then and extra 1/4+ turn with a wrench…never had issues with them leaking. I like how the 10 gallon is plumbed to the display. Are there any potential issues you might come across with a plumbing setup like this?
Click to expand...

The big advantages are that I don't have to monitor and control their chemistry separately, and the plants in one will clean the water in the other. But it means it also means that I could do something terribly wrong and kill both tanks at the same time. I certainly can't use the small one as a quarantine tank, since they are connected. And I'm a little worried about heat loss since I'm running the water through uninsulated pipes outside the cabinets, but so far it seems OK.
You must log in or register to reply here.
Share:
Facebook Twitter Reddit Pinterest Tumblr WhatsApp Email Share Link
Top