BARcard
i was going to question the chiller, but nvm forgot that your sump is not in the stand.
Last edited: Jul 28, 2022

ashburn2k said:
i was going to question the chiller, but nvm forgot that your sump is not in the stand.
Click to expand...

No that is in the stand.

BARcard
ok dont you think running skimmer/scrubber/rollingmat is overkill for nutrition export?, also the chiller will create hot air in your stand if you are enclosing it with boards.

BARcard
Ordered a Fiji Cube 10G for a QT tank. I might as well get that started.

ashburn2k said:
ok dont you think running skimmer/scrubber/rollingmat is overkill for nutrition export?, also the chiller will create hot air in your stand if you are enclosing it with boards.
Click to expand...

Yeah I've thought about that, but no idea if it's too much. It's impossible to know until I actually get the tank matured. I would combat it by just feeding more or stocking with more fish.

Skimmer: I've never had a skimmer do a *great* job, at most it's just a bubble maker and it pulls some particulates out, but there's still tons that it misses. If you get a skimmer that's too big, it doesn't do anything. Smaller, in my experience, actually does something, but not everything.

Fleece roller: keeps the sump clean and floating bits from getting everywhere. I've used filter socks and filter floss and it keeps things really clean, but my nutrients were never affected. It's all visual in my experience.

Algae Scrubber: I know algae will grow no matter what, I just want it to grow in the algae scrubber instead of the DT. In my experience, algae will grow in a healthy tank, but where it grows can be controlled.

All three of these things take nutrients at different stages, and really doesn't take all of it at all in my experience. It helps balance things out, and the automation I have built in will keep things stable. A "matured" tank can put out enough nutrients where these things just help manage it. That's the idea at least.

On the flip side, I've had zero mechanical filtration and have still seen 0 nitrate and 0 phosphate. So there's that too.

I'll probably start with the Fleece and Skimmer, and since the skimmer is undersized it should be good. I'll add the algae scrubber later once I notice some algae growing through the DT.

BARcard
maybe it's just me, I always keep tangs and foxfaces, never had any problems with algae growing in my tank (yes i do feed crazy like @The_Lazy_Reefer ), unless u meant the coralline algae...

ashburn2k said:
maybe it's just me, I always keep tangs and foxfaces, never had any problems with algae growing in my tank (yes i do feed crazy like @The_Lazy_Reefer ), unless u meant the coralline algae...
Click to expand...

I never had tangs, so nothing ate the algae! Also, I somehow always get bubble algae no matter what I do... so that's annoying.

BARcard
I'm thinking of trying to pair the randalli, and maybe even give them a pistol shrimp. Anyone attempt this before?

kinetic said:
I never had tangs, so nothing ate the algae! Also, I somehow always get bubble algae no matter what I do... so that's annoying.
Click to expand...

What kind of foxface do you have? How stingy are they?

this is the one i have and they are only get stingy if you piss them off. but my last one has been nothing but nice guy to play around, eat off my hands etc.

this is the one i have and they are only get stingy if you piss them off. but my last one has been nothing but nice guy to play around, eat off my hands etc.
Click to expand...

I've never considered, maybe I'll get one down the line. Hopefully my algae scrubber will take care of enough algae in the DT, but I have no idea if that's really going to do it. I'd hate to starve it!

I'm going to do my damned best to keep pests and algae out, but I know that's going to be close to impossible.

BARcard
I dosed 2ppm of Ammonium Chloride into my temporary 40G breeder yesterday and it came out to 0ppm 24 hours later. I'll keep doing this for another week and then I think it'll be time to break down the Reefer 170. I'm still not sure if I should keep it or sell it. Might make for a good frag tank one day (though dimensionally it's not very shallow.

I also setup a new Fiji 10G AIO Cube today as a QT. These tanks were 15% off on BRS so I grabbed one. I started some Tim's One and Only with 2ppm of ammonia today as well.

Plan:
After the tank matures for a 6-ish months, I'll probably start collecting coral, and if I time it right, my new system will be ready and cycled for all these things to go in (of course the latest addition capped at 76 days prior).

I'm going to get bold with this one. I want a cantilever shelf as the main SPS structure. It will slope down a bit to point at my nem islands. It will be 15" wide, 26" long (ending at the 2/3rds mark of the tank) and will take up the bottom third of the tank. It'll be one big "cave" so fish can swim under/through.

The idea is that SPS will start filling up the top part of the tank, with plenty of room to grow upwards. I'll probably have a 3 or 4 stags towards the back and then some tabling towards the tip of the cantliever.

I'll have a pedestal that's flat for my magnifica at the end. My magnifica tends to point away from flow, so putting it at the end will probably be a good spot for it. Surrounded by sand and basically a table top will hopefully "coerce" it to stay on the flat top. I'll smooth it out with some putty. Magnificas tend to like flat smooth surfaces, but mine always just avoided flow so I never got it to sit on a pedestal. Now that I have a peninsula, this will be a great calm spot.

The other small island will have a bunch of BTA's most likely. I'll have one of my current crazy RBTAs there, and I'll probably try to mix in a green base one, and maybe a CSB. I know, crazy to put a CSB on the same rock as other BTAs, but who knows. I just want a rock full of BTAs. This rock might be a bit small, so I might just let my RBTAs take over.

So the question is, how will I build this? Well I was thinking of just drilling a bunch of holes for acrylic rods and then using Marco mortar... but I'm probably going send these ideas over to @jestersix for him to build for me.

I'm hoping on going with dry dead rock (marco is my fave) with a large foundation/flat rock as the anchor for the cantilever, and then shelf rock to keep the rest very low profile. Maybe some "overhangs" on the underside for blennies/gobies/hawkfish to hang out in on? And then something like the marco pedestal for the magnifica, smoothed out with putty. I'll probably ask @jestersix to just cover all the joints/putty/etc with a dusting of rock dust so it looks nice and even. I'm sure he has his magical ways. 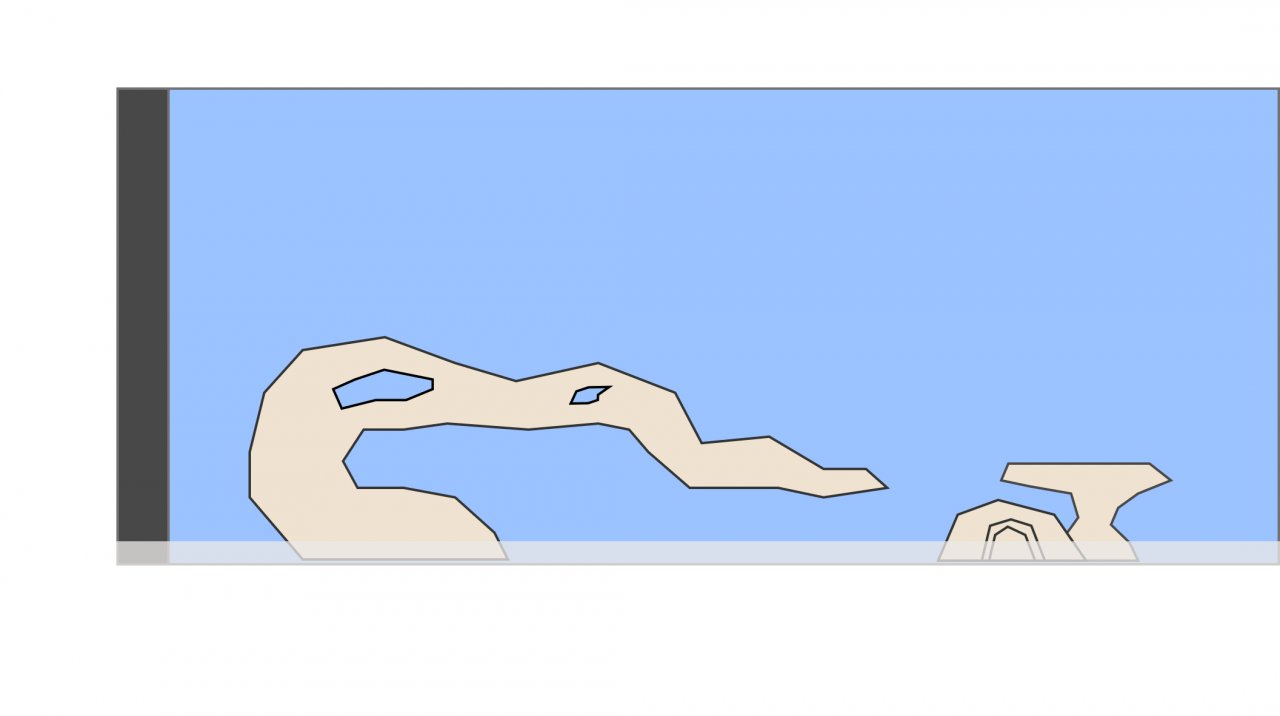 Side view with measurements / thirds grid: 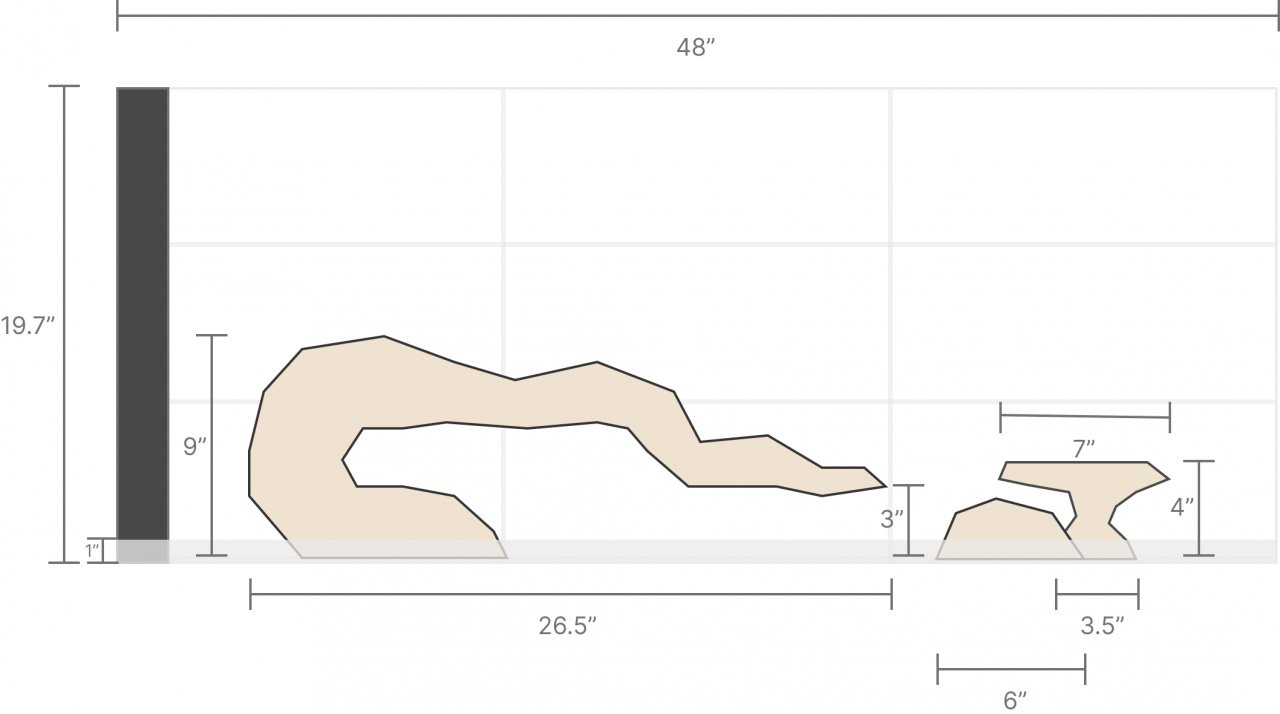 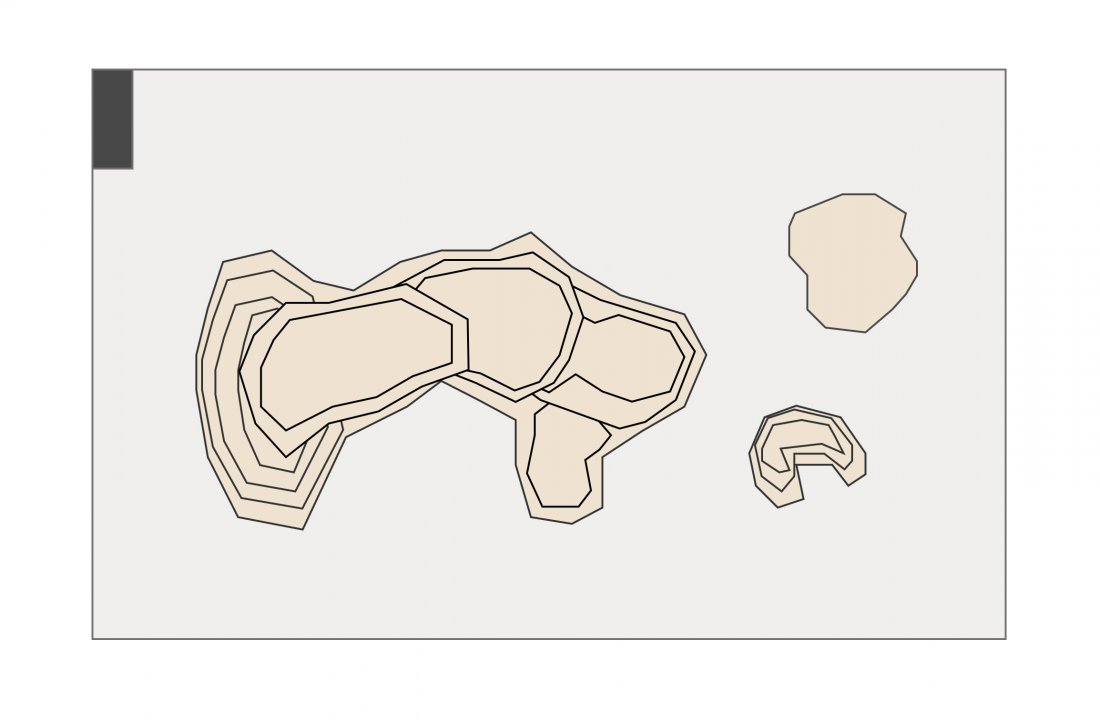 Top down view with measurements and 1/6th grid: 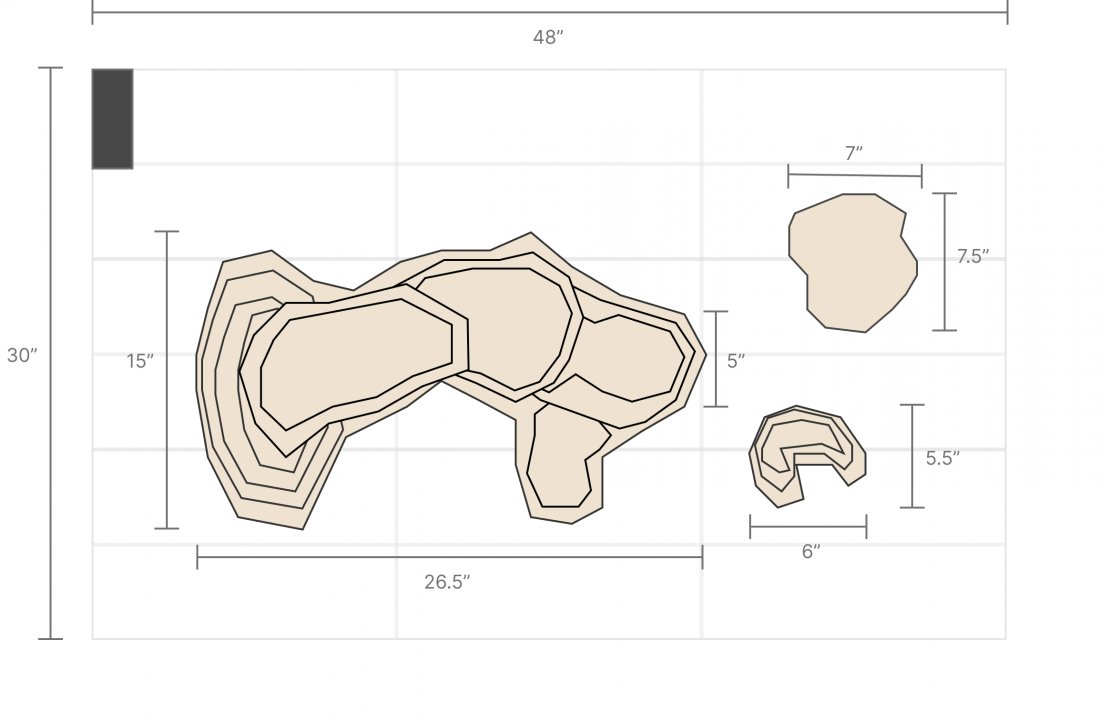 BARcard
Art, I think my scape is really similar. When are you stopping by?

iani said:
Art, I think my scape is really similar. When are you stopping by?
Click to expand...

I'm gonna text you soon! So swamped ( as we all are ), but really looking forward to checking out your tank, the office, and you of course.

BARcard
I don't know if I mentioned it, but I got the UltraReef Akula 160 skimmer for this tank. I got it way ahead of time so I can play around with it, but it was super loud. Anyway, AquariumSpecialty really went above and beyond and tried to get me a replacement pump (which they're testing now)... at the same time Ultra Reef just announced that they have a DC pump replacement kit! While it's really not needed and was mostly designed for the Akula 200, it would work in the 160.