BARcard
Well here we go, back at it again! After selling off my 90 and having my IM tank crash due to construction, it took a while to get up the energy and motivation to get back into reefkeeping. Partly due to 2 kids and lack of space which meant recuring rock would be a pain; and partly due to the job being busy.

I finally bit the bullet and purchased a working tank second hand and got rid of the old equipment - an established tank has risks, but also requires less set-up and more hands off maintenance. And on the plus side, my wife and kids could enjoy it immediately (a great benefit to me). So after lurking for a bit here and finding nothing in the size, configuration I needed, I ended up finding a Red Sea reefer 250 on Facebook from someone who was moving out in Suisun City.

CORAL / SOFTIES
* 1 Green Toadstool
* 1 needs to be identified coral (see pic)
* 1 Favia that has gotten the life stung out of it by the nems in transition
* 1 small sliver of GSP that I'm secretly hoping doesn't make it (is that wrong?)
* Some blue sponge (or what appears to be blue sponge)
* 2-3 green mushrooms
* Some orange zoas
* A large frogspawn (7-8 heads)
* A medium size duncan (8-10 heads)

CURRENT PLANS
I plan to keep run this tank 'dirtier' than my previous tank that had SPS; it's easier and allows for greater maintenance gaps and tolerance in case my kids dump a ton of food in there for instance. To that end, I'm currently planning on stocking soon:
* 1 Leopard Wrasse
* 1 Mandarin Dragonet
* 1 Scallop
* 1 Sand Sifting Star
* More cleaners (emerald crabs, snails)

In future, I have a KHGuardian meant for my last tank that I may install (or sell, TBH, since I don't think it will matter so much for softies); I'm trying to find interesting zoas, goni, mushrooms, etc. to stock so will be trawling here and FB auctions. Otherwise, at some point will need to add Chaeto to my sump and probably a reactor with carbon or GFO, but not rushing it since - again - don't need to keep the water pristine.

HOW TANK IS DOING
The move was a long one to SF, and the tank is experiencing a mini cycle as a result - requiring me to clean out what I suspect are brown dinos on the sand weekly; algae is accumulating faster than normal. But fish and everything is thriving; have had to move the favia and the mystery coral and the toadstool a few times to avoid getting stung, but now that the flow is more stable, things aren't moving as much. The repeated rock movements stressed the fish, and I lost a cleaner shrimp that was in there (it appears to have been eaten by the trigger). The RBTAs are spawning like crazy. I will probably need to start giving some away.

Props to @PeetaJai again for helping me with the Apex, which I really had 0 idea about; it wasn't so bad once I figured it out. 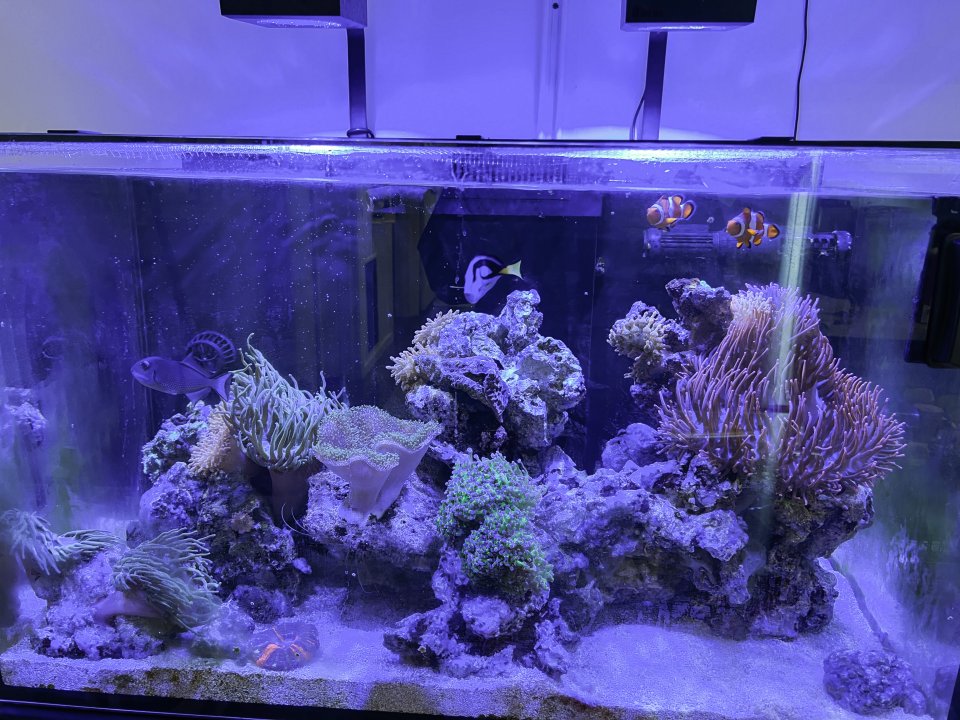 Will try to keep this journal updated as the livestock comes in and get acclimated.

Stay cool out there today folks!

BARcard
Very beautiful tank in person. It was fun working on the apex with you Ryan.

Also adding additional pics of the tank + Scoly. So far so good with acclimation.

BARcard
What is the image size limit here? I downsized to 1MB and it's still saying 'too big...' jeez