Staff member
Yes of course, I’m planning to feed. I know lighting is optional, but I may anyway since I have a low output extra light.

ofzakaria said:
Oh yeh I would not break them apart either.
Will swing by couple LFS and see what they have. Thanks alot for the infos

Sent from my SM-G960U using Tapatalk
Click to expand...

I'll let you know if I see any.

One thing to know -- the filefish availability is seasonal. Between now and march, there should be plenty and super reasonable prices. After March, they are hard to find...

JVU said:
Yes of course, I’m planning to feed. I know lighting is optional, but I may anyway since I have a low output extra light.
Click to expand...

LIght helps them... they have zoox.

NanoCrazed said:
LIght helps them... they have zoox.
Click to expand...

Light and amino acids for sure makes them thrive.

Did somebody say aiptasia and majano??

5G pest tank says I have more than anyone 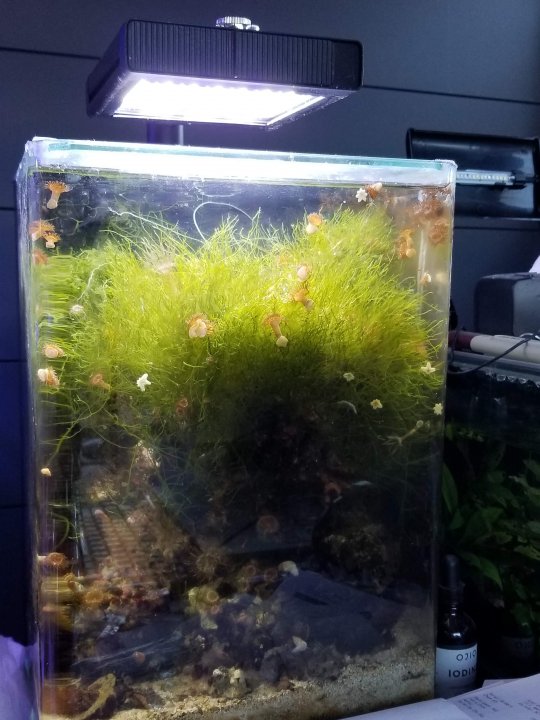 All this talke of file fish...

Here's how you sex a male... notice the fuzzy bristles? Females won't have this much on the tail

I'm no expert on Aiptasia reproduction, but I believe if you want them to reproduce faster you should actively mess with them (cut them in half, prod them, etc), which I think causes them to create clones and spew them out. If you leave them alone they'll just grow and be happy.

Same with manjano
This is good guide for breeding


Sent from my SM-G960U using Tapatalk

Staff member
I’m definitely planning on messing with them

NanoCrazed said:
Did somebody say aiptasia and majano??

5G pest tank says I have more than anyone

Congrats?
Why do you have a pest tank?

ofzakaria said:
Same with manjano
This is good guide for breeding


Sent from my SM-G960U using Tapatalk
Click to expand...

You would be suprised. There are many pest only tanks out there. Including @NanoCrazed

Light on details but interesting.

Renamed Exaiptasia recently. I could see that being confusing... If someone says they have an Ex-aiptasia tank do they have them or not?

Staff member
So I’m officially trying this. First step is to be able to breed aiptasia easily and effectively.

Started with about 6g of water from my tank in a 10g glass tank. Small heater, air stone/air pump. Glass lid for evaporation. Left over inexpensive LED fixture on a timer for 12 hours.

I bought a bunch of cheap 2” square ceramic tiles from Home Depot arranged in 1 foot sheets. They had 2 drops of glue between each that I had to take off (PITA) and then washed/soaked them in tap water. I didn’t know if it would make a difference if I layer them smooth side up or rough unglazed side up, so I alternated rows of each to see.

My first batch of aiptasia didn’t do so well after a few days. I think I had an ammonia spike from the lack of live rock/bacteria and from the various injured aiptasia I threw in (duh). I guess they aren’t as impossible to kill as everyone says.

So I did a 100% water change, added some dry coral/rubble rock, added some Dr. Tim’s I have left over (don’t know if still viable), and some Prime. And I’ve been changing out 1 gallon of water per day (or so) with water from my tank, and smelling the air in the tank a couple times a day for the tell-tale smell of ammonia/fishiness. I’m also feeding very sparingly with a tiny amount of Reef Chili.

Once the bacterial load seems established, water is stabilized, and the little buggers are growing, I’ll back off on the water changes to once a week or so. And I’ll start harassing them, apparently if you annoy them by brushing up against them until they retract they reproduce faster. I may also try cutting them in half, that is also supposed to work well. Basically my plan is to do everything wrong if they were in my display tank lol. 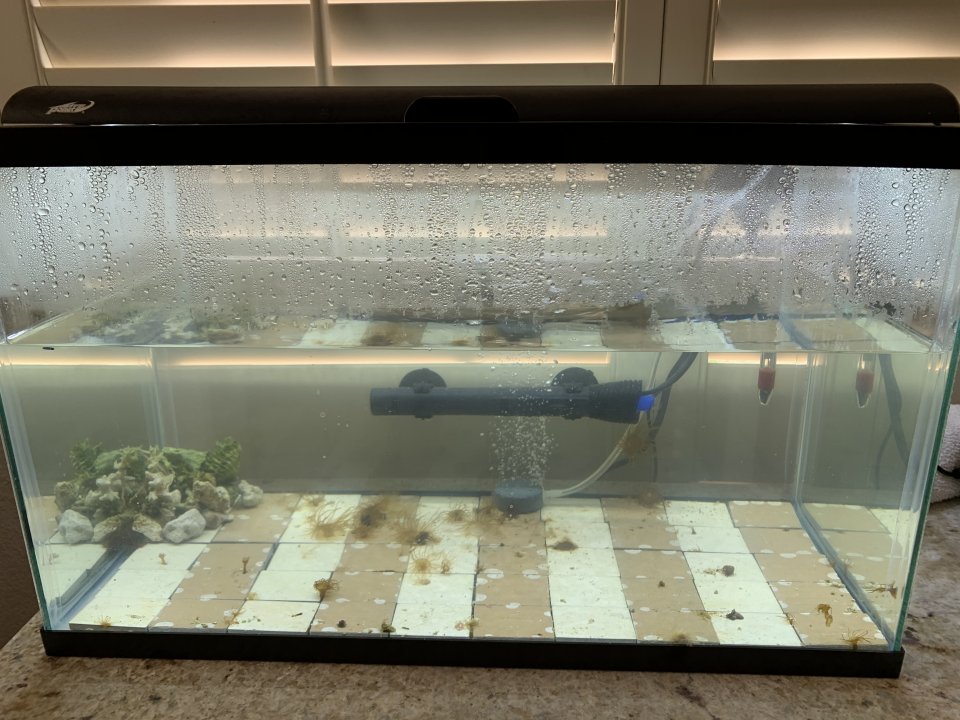 JVU said:
Congrats?
Why do you have a pest tank?
Click to expand...

I thought it would be cool to let unwanteds run amuck... . So anything nuisance \ pests i find hitchhiking goes in there... I actually bought a few starter pieces loaded with aiptasia\majano to kick start it.

Over the years, I've questionables that turn out to be a cuke, a sea spider, interesting random sea life... and love watching how the balance of nuisance algae shifts back and forth

One of my favorite tanks, and best part -- zero maintenance... just an occasion top off with RODI.

Staff member
You might want an auto-feeder.
Nice cheap flake food should work.

Maybe a small powerhead also. I doubt you get much flow from that airstone.

you don't need to do much to them././ but if you want them to multiply quickly... piss them off. your tank will be covered in no time!

rygh said:
You might want an auto-feeder.
Nice cheap flake food should work.

Maybe a small powerhead also. I doubt you get much flow from that airstone.
Click to expand...

Yeah, I may, I have an extra auto-feeder and multiple extra power heads around. But I’m trying to keep it as simple as possible. And I don’t trust an auto feeder to feed the minute amounts I’m planning. The air stone does give a little flow everywhere surprisingly, not at all stagnant.

Mine are laying eggs already but I think wrasses are eating the eggs spiral(
How is your project going so far?

Staff member
It’s going well. I’m focused on figuring out a good way to grow plague-levels of aiptasia first, so that I have a reliable food for them. I think I have about 50 in the 10g tank now, want to have several hundred before I start harvesting them.

I think the water is stabilizing and getting some bacterial balance, not requiring as many water changes and without any funky smells or unhappy looking aiptasia.

I haven’t ordered any Berghia yet since they don’t reproduce great in my tank either for whatever reason, so I’ll be doing the breeding outside my system. They can breed in the tank too, but in my experience they don’t sustain their population that way. My guess is it’s because my cleanup crew is too aggressive.
You must log in or register to reply here.
Share:
Facebook Twitter Reddit Pinterest Tumblr WhatsApp Email Link
Top