Next project has been tweaking the lighting, I like my light fixture but even the bluest and actinic T5 bulbs in my experience haven't quite produced that fluorescent blue that makes some coral pop. I am trying to find a way to install a couple blue reef brite LED strips to help get that blue. The issue I have is mounting them, the way the T5 fixture hangs, the only place I can put the strips are on the outer edges of the tank, which isn't a problem but I need to angle them towards the tank to get the coverage I want and it seems none of the mounting brackets do that, they only let them point straight down. 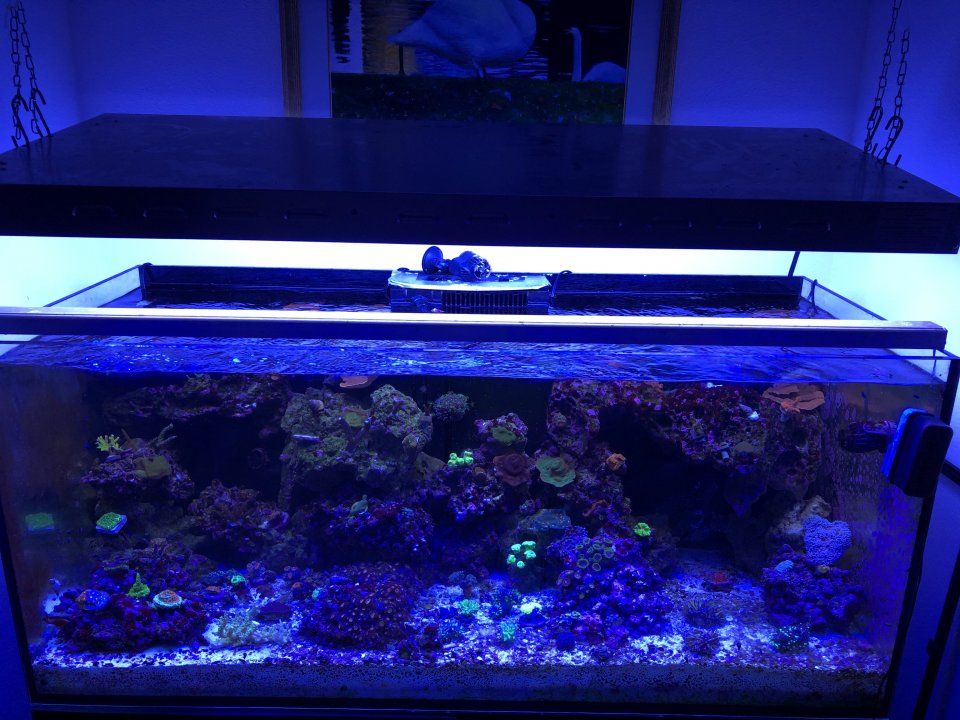 Here is the LED bar across the tank, you can see how its blocking some of the light coming from above it, but maybe it's negligible to the point where if the reefbrite is on it doesn't matter, but I was hoping to have the reefbrite on after the T5 turns off. 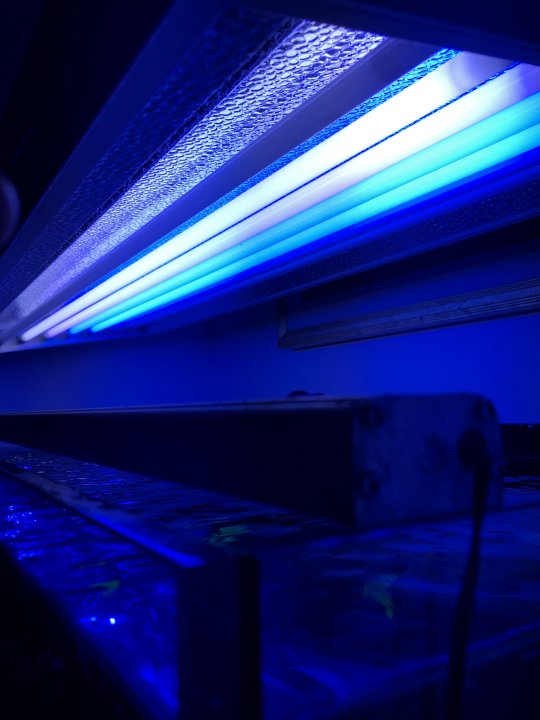 Here you can see where there is some room under the T5 where there are no bulbs and presumably the LED bar wouldn't be blocking out much. 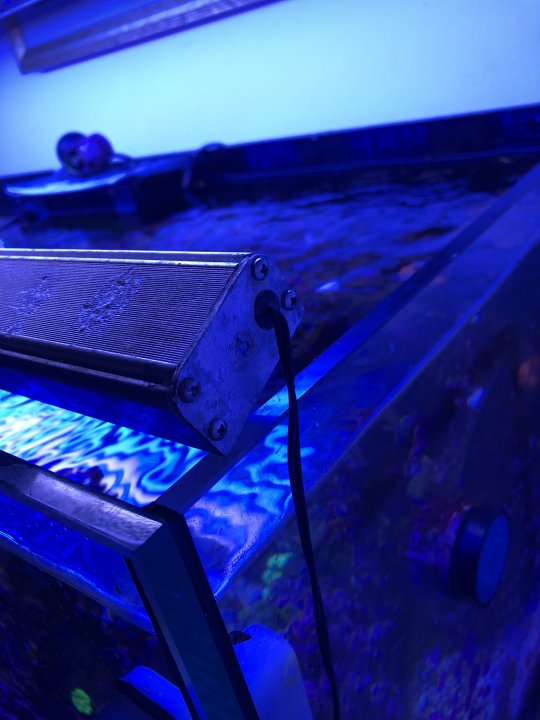 So what I was thinking is something like this where the light sits on the outer edge but it is angle toward the tank, I might end up having to build a mount myself for this to work though.

I have only been running 4 out of my 8 bulbs for a while now, so maybe I can put the two reefbrites on and go back to 8 bulbs which would make up for any loss of light in the tank. Not really sure how to move forward with this but brainstorming. I tried to attach the reefbrites to the fixture but they are pretty heavy and the aluminum that my T5 fixture is made out of wasn't doing a great job at holding them up when I screwed them in. Might try the reefbrite mounts, but I hate to spend $50 on something that lacks a feature I want, but it will probably look cleaner than anything I would build myself. Still brainstorming on all this.

Got the reefbrites mounted and working. A Home Depot run and a little scrounging through the leftover box in my garage got me sorted. 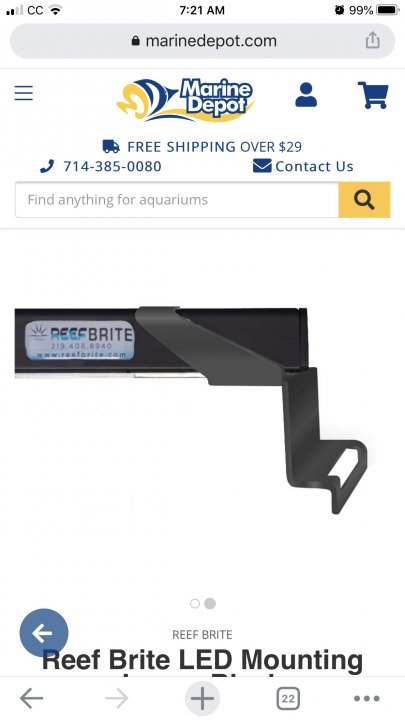 I wanted something like this which would sit on the outside of the glass because I have a net cover on my tank and it wouldn't it. 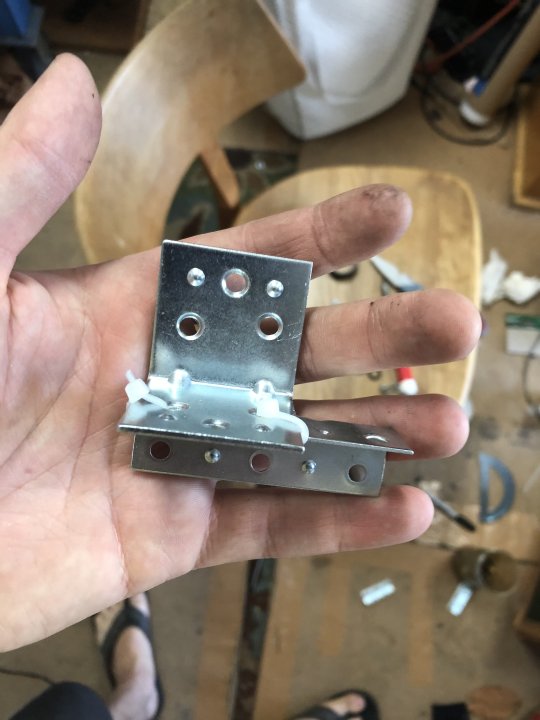 Inspired by the official mounts I bought these hinges and zip-tied them together, I used zip ties mainly because the holes did not line up will for a screw, plus I didn't want a screw sticking out onto my tank and I didn't want them to rust together. Also I have a lot of zip ties so it's easy. 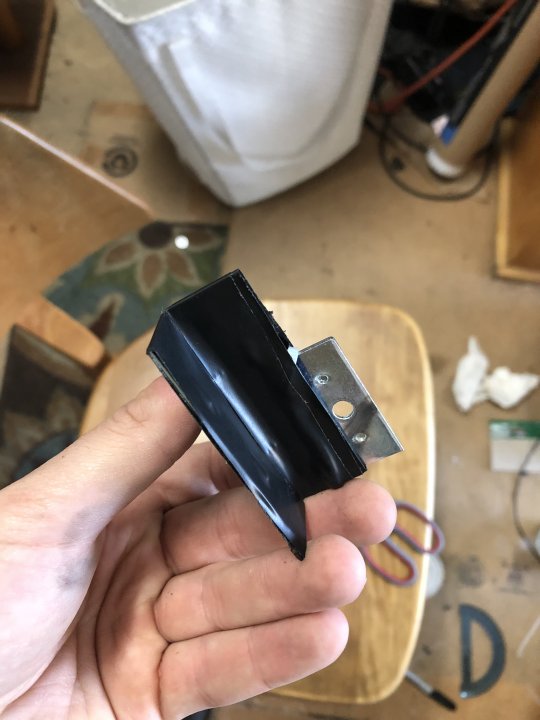 Wrapped some electric tape over it, not so much to prevent rust, but rather to prevent the rust from staining the glass since I have had this happen before.

I then put a screw through the top hinge to the reefbrite and set the angle I wanted. 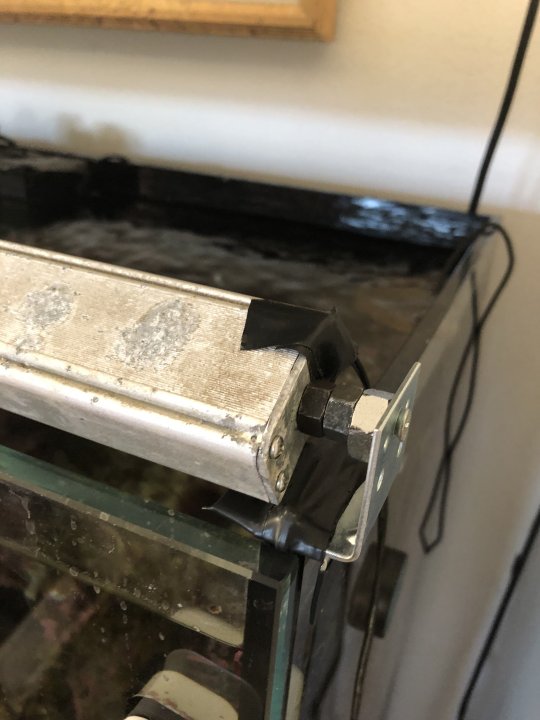 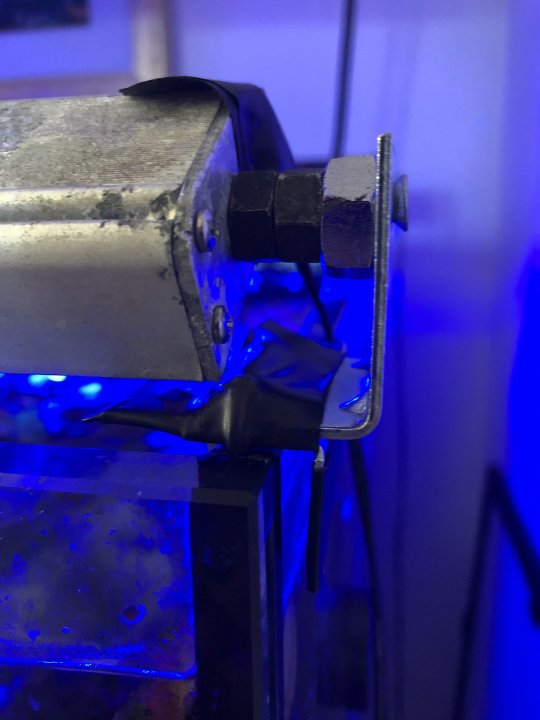 I then repeated this for the other light and here is the finished version: 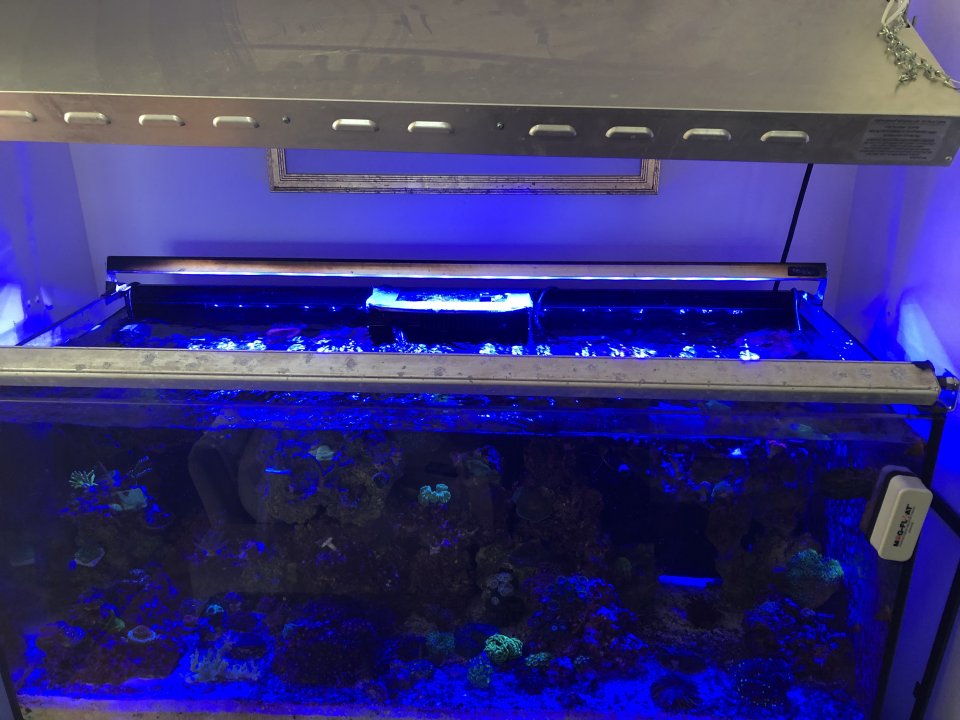 So far so good!

You can try to plastidip that taped area.

ashburn2k said:
You can try to plastidip that taped area.

Not a bad idea, any experience with it? Just worried over time the stuff might chip off and fall into tank

BleepBloopMunchMunch said:
Not a bad idea, any experience with it? Just worried over time the stuff might chip off and fall into tank
Click to expand...

Lots and lots of thin coats. You do not want it to bead so more thinner coats are better than a few thick ones which may run. I haven’t used it for anything reef related, but this could be a good use. you just wouldn’t want it to be causing friction on the part you’ve spray out it will peel

Like max said thin coats and multiple dips, let it cure for at least 12hrs, it’s a long process but it’s more durable than that tape in a long run. I used the plastidip for my tweezers before the carbon fiber ones.

Ok sounds good, thanks both of you for the info, I’m going to leave it like this just to see how I like the setup, and if it becomes permanent I’ll get on the plasti-dip