A little intro about me and my experiences in the hobby can be found in my welcome thread: https://bareefers.org/forum/threads/back-in-the-hobby-seriously-this-time.26827/

It's been about 2 months of planning and gathering all the equipment but the tank is finally up and running. The move from my 50g cube (running for ~6 months) to this tank didn't go as smooth as planned. It ended up taking about 4 days and I lost a couple fish in the process. Corals are pale but are opening backup up and acclimating to the new lighting. Much of the equipment I carried over from the 50g so some things here and there will be upgraded over time.

Goals:
My goal for this tank is to be a show display, which was part of the agreement with the wife since this is a room divider between our living and dining area. That means resisting the urge to collect too many frags and instead strive to grow them into large colonies. Other key things are keeping the sand bed relatively clear, no frag racks inside the display, and not too massive of rock work so there still is a line of sight between rooms. Top half will be SPS dominant LPS and softies in the lower half. There will be an equal emphasis between having a lush coral garden and a healthy, probably leaning on the heavier side, fish population.

Shipment day! I ordered the set from Two Tides Aquarium Supply who is an authorized dealer of Pro-Clear aquariums. Tyler there has been extremely helpful with every step and genuinely interested in having you succeed instead of just making the sale and be done with it. 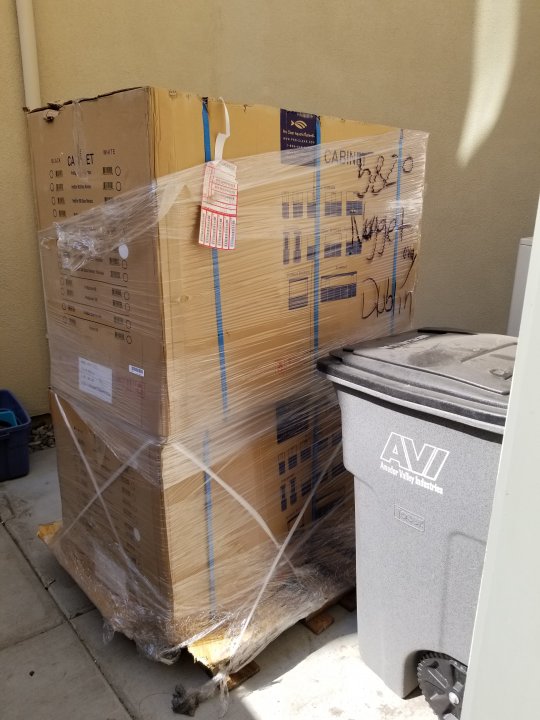 The overflow side of the tank will be the existing rock structure from my 50g cube. Left side I built from rock I scrounged from craigslist and mortar from Two Littte Fishies. I went for a multiple platform type of shape. Not 100% satisfied with how it came out but I'm not too concerned with that since it'll eventually be covered in coral. What I'm really glad I did, and wish I had done it in the past, was drill a bunch of 1/2" holes to stick frag plugs in. 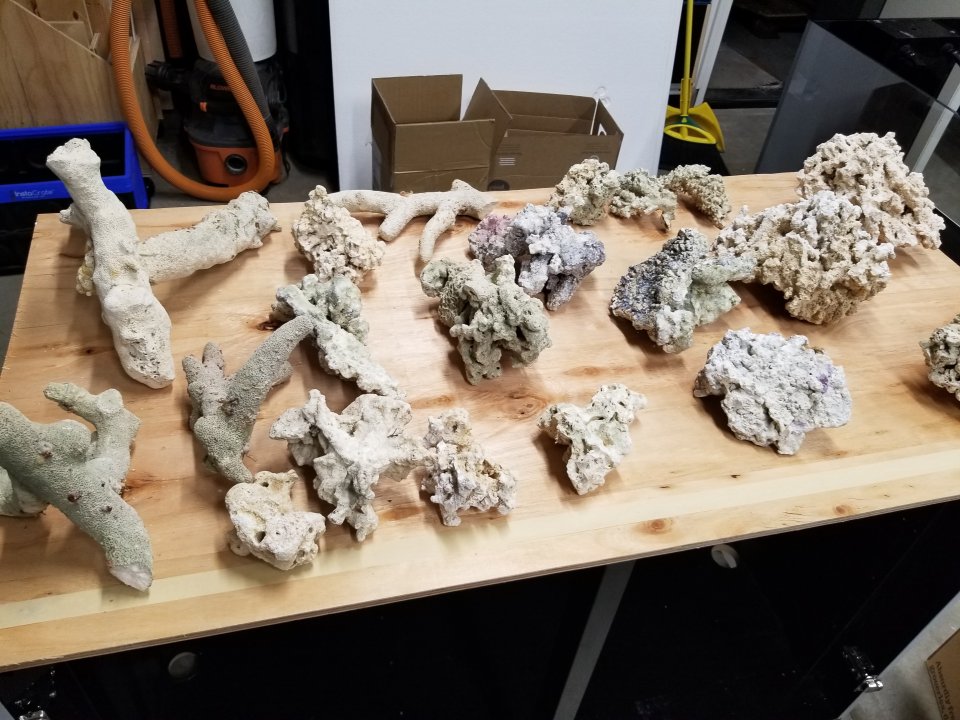 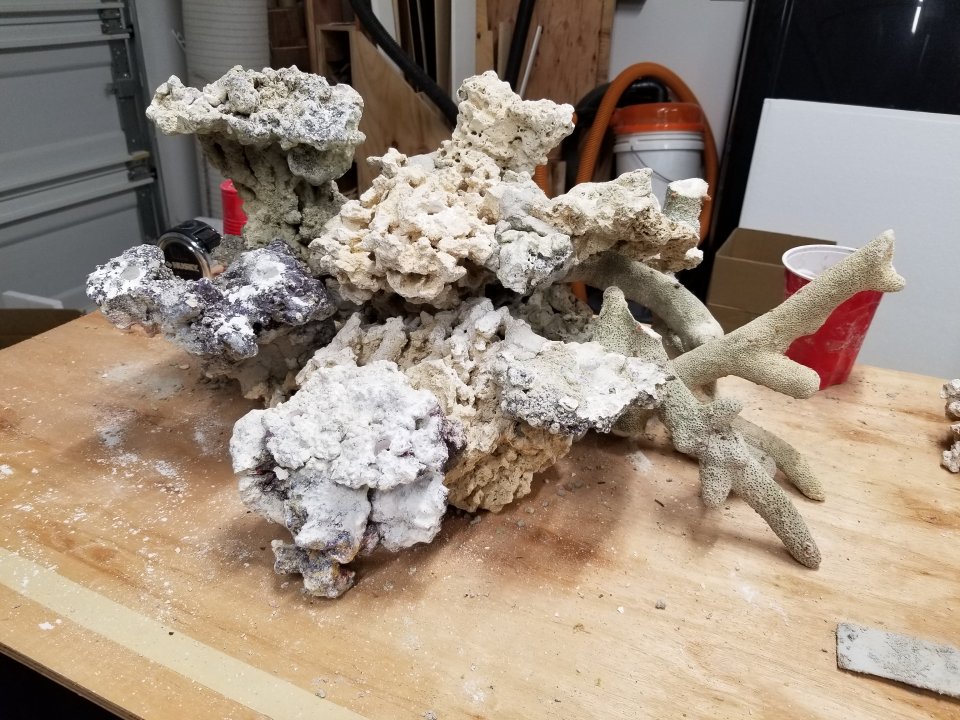 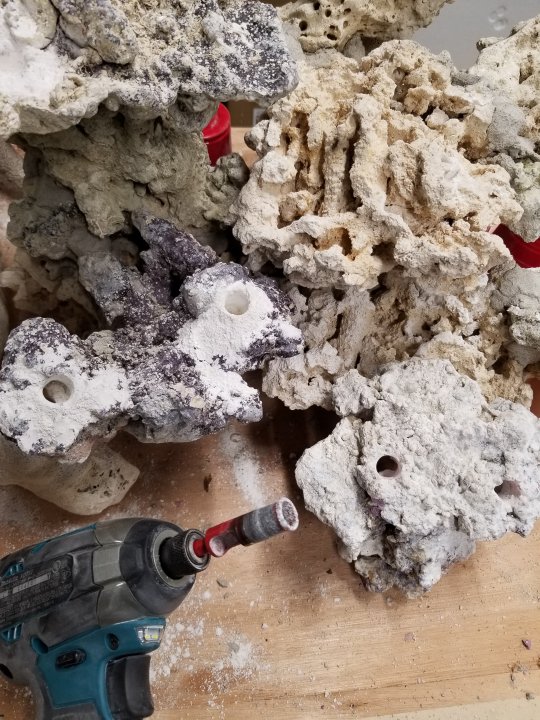 Emptying out the existing tank since the new tank will take its place in the same spot. All the rock and livestock was moved to a 70g pond stock tank the day before friends were to come over to help move the new tank in. 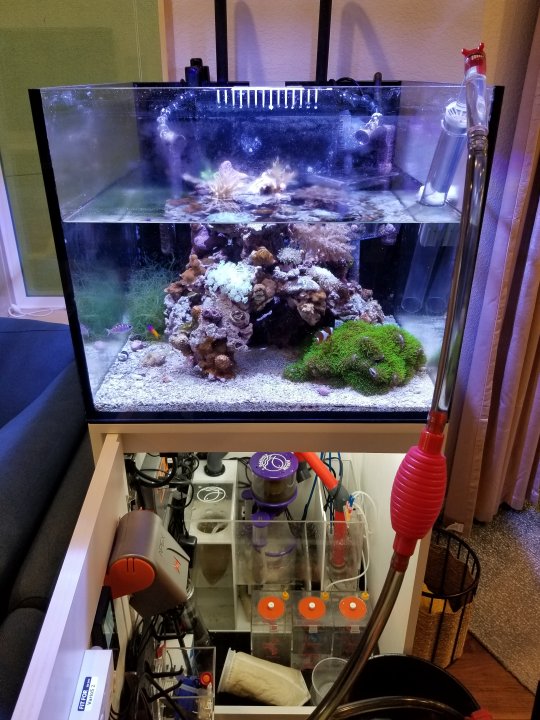 The tank itself isn't too heavy at 200lbs, but maneuvering it up a flight of stairs made me thankful I had 4 sets of hands. My main floor is on the second story. It's a single family home but one of those stack and pack new development tri-level homes. 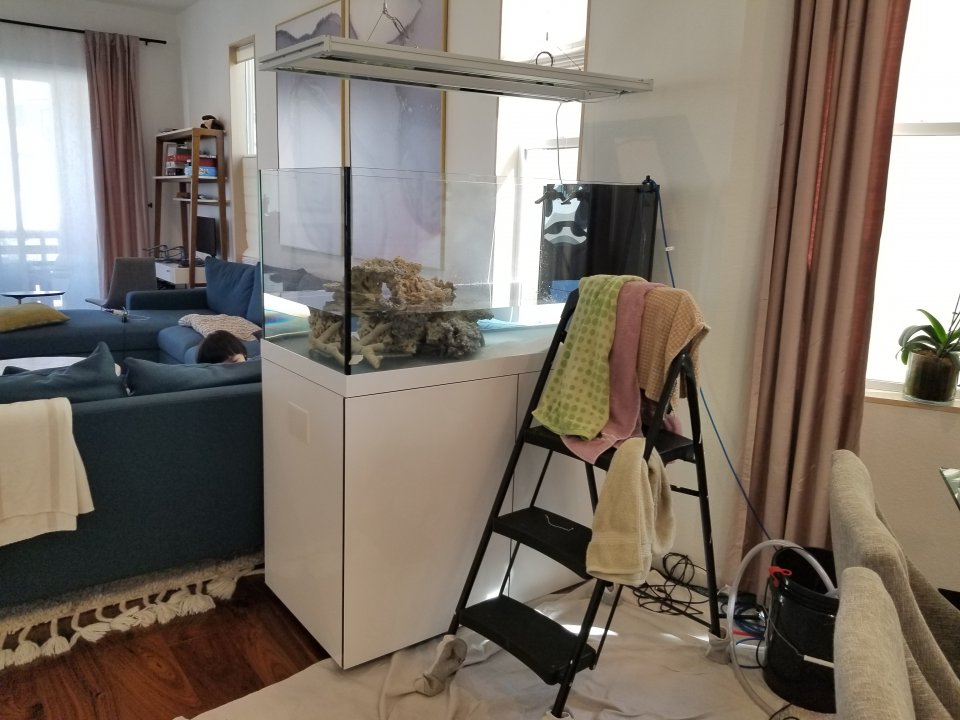 As I started filling up the tank gallon by gallon with my little 50gpd RODI and feeling the weight, I started to get nervous about the floor supports. Even though I checked out the existing support structures and got the opinion from a civil engineer friend of mine, the thought of ~2000lbs sagging the floor over time started to 'weigh' on me. The first shot is how it looks from below. Luckily there are homes still being built in my neighborhood so I was able to take pictures from one in progress to get a full view of the framing. The tank would sit perpendicular across two trusses with a load bearing wall supporting the trusses on one side and a partition wall on the other, but none directly beneath it. The unsupported span is no more than a couple feet which is why it passed the sniff test but to sleep easy at night, I decided to stop filling and build a support for it using a 4x4 beam to support the trusses directly beneath the tank and a 4x4 post on a leveling jack + 2 2x4s supporting the end to prop it up. Luckily beneath the tank is a walk-in closet so aesthetics were not too important, though I plan to trim it out and paint it later. 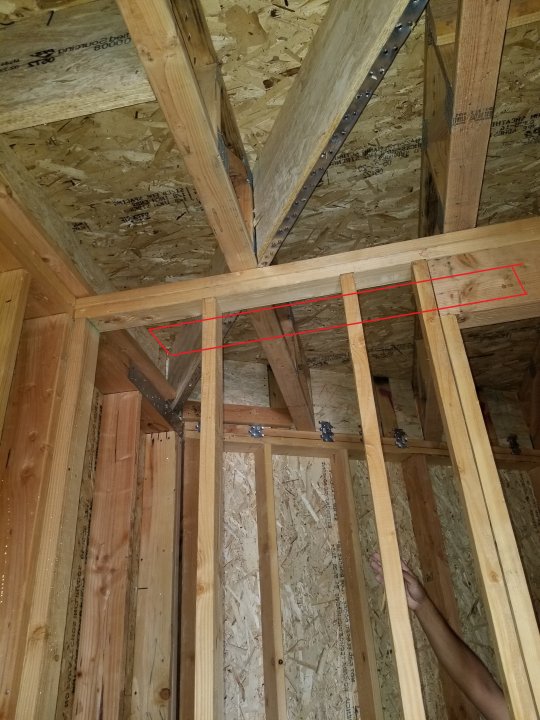 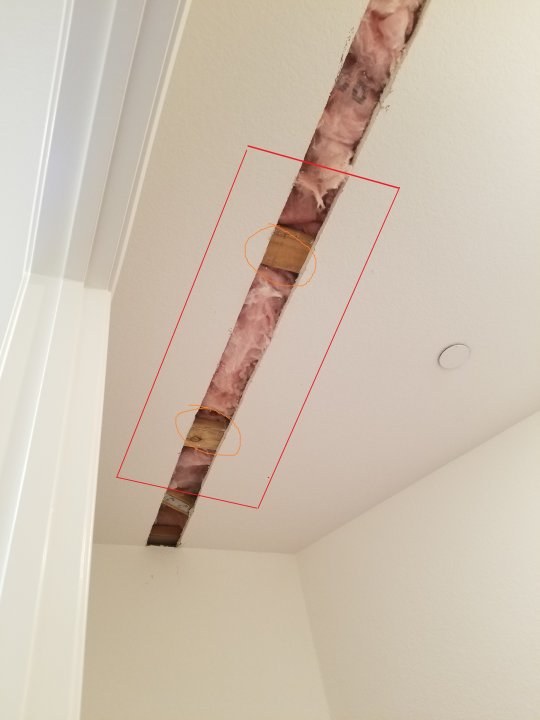 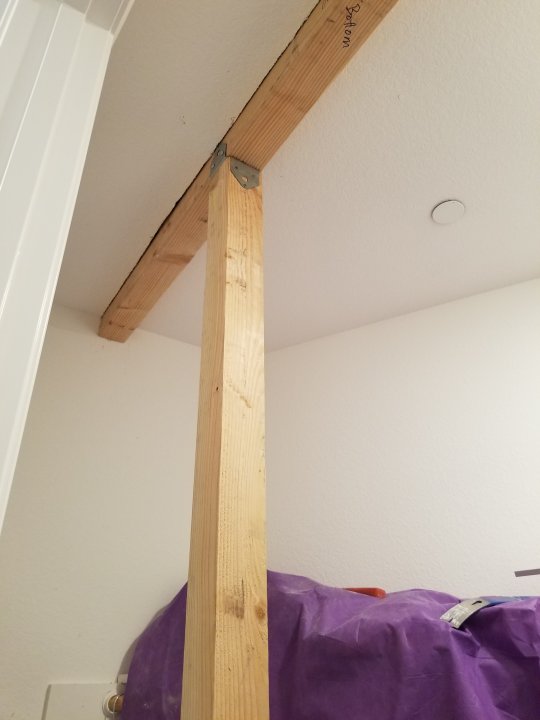 And with that, continued filling up the tank, transferred the livestock, and got everything wired up. Still a work in progress to clean up all the wiring. I used an 8u server rack to mount the switch panel and controllers. 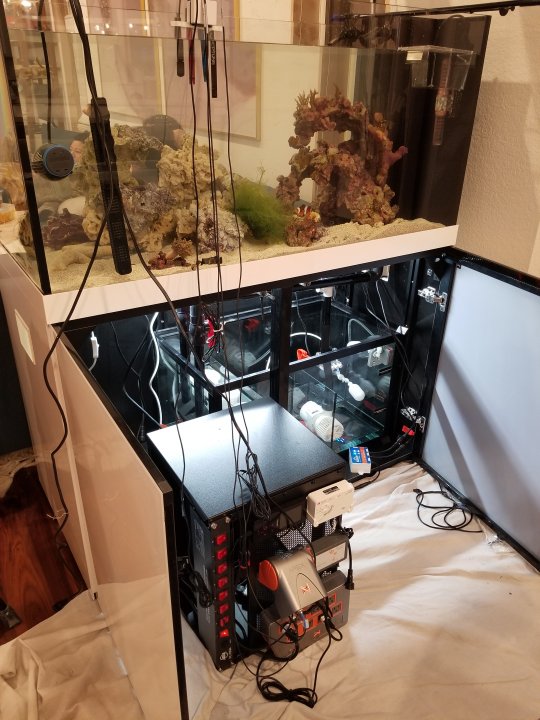 And here she is today! Half of the fun was building it and now we wait until everything stabilizes to get it stocked up. In about a year I'm hoping to contribute and participate in DBTCs and have goodies for swaps. 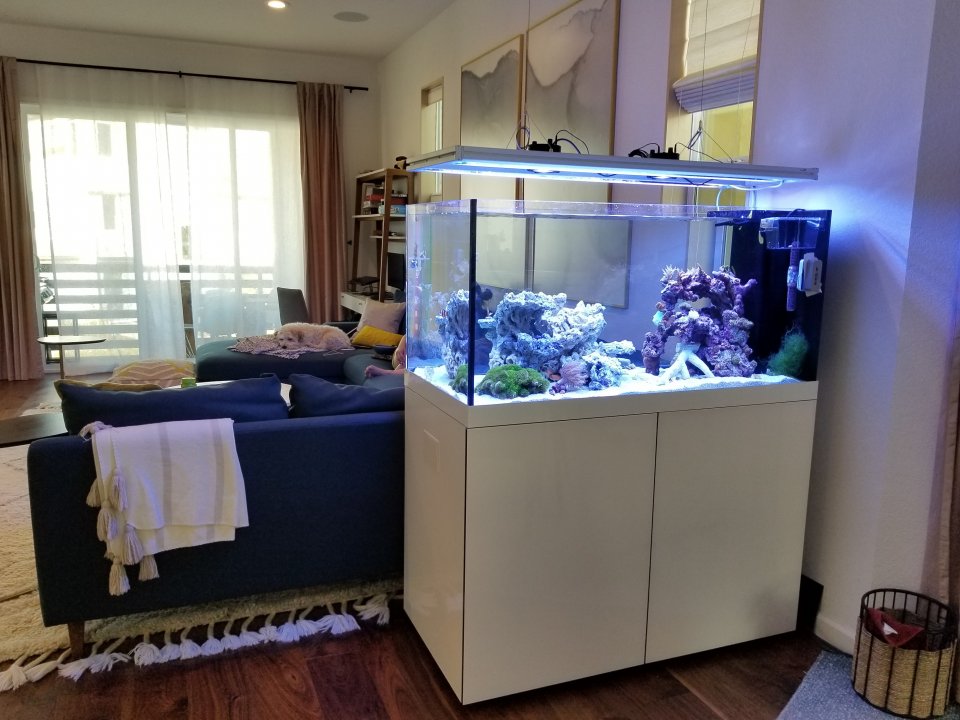 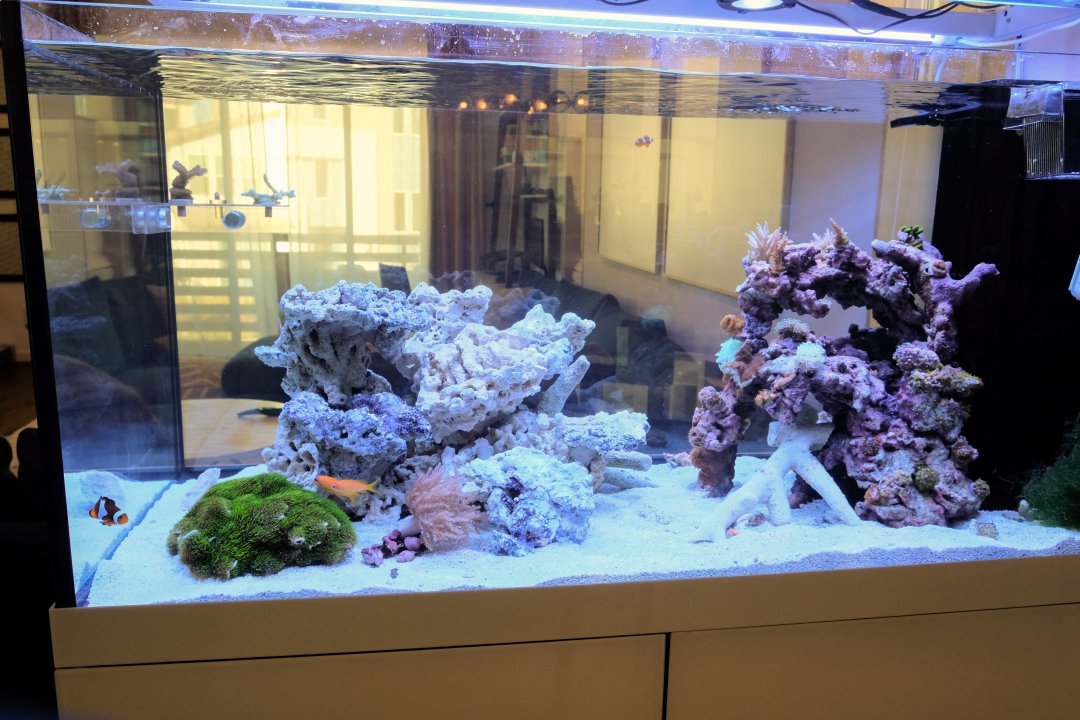 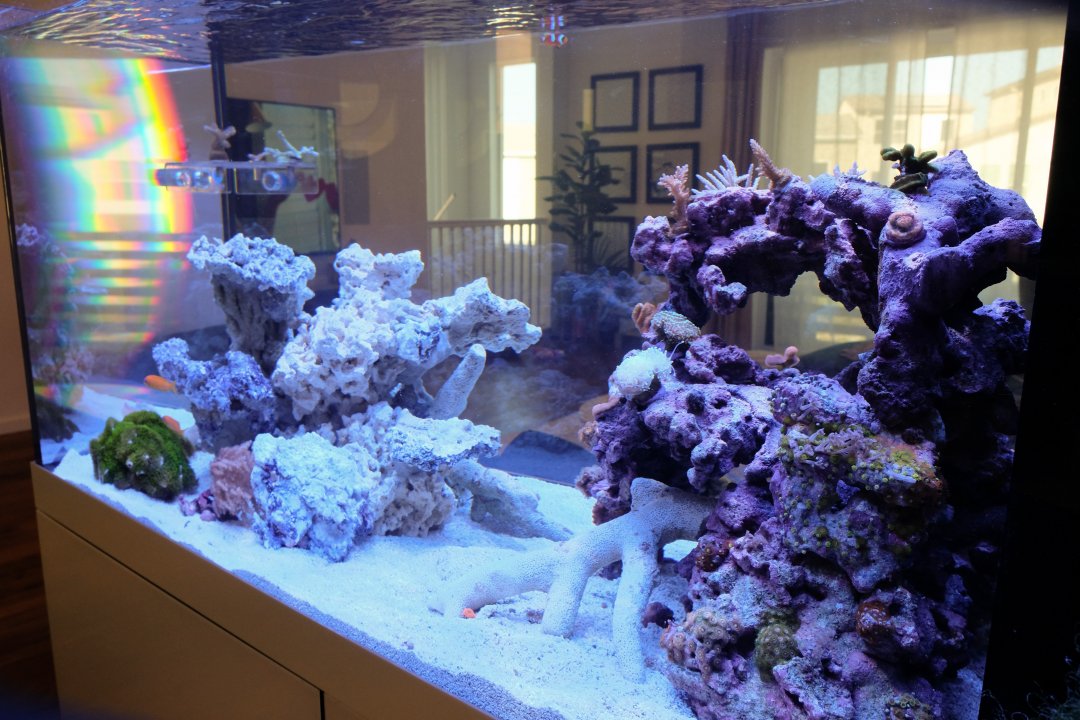 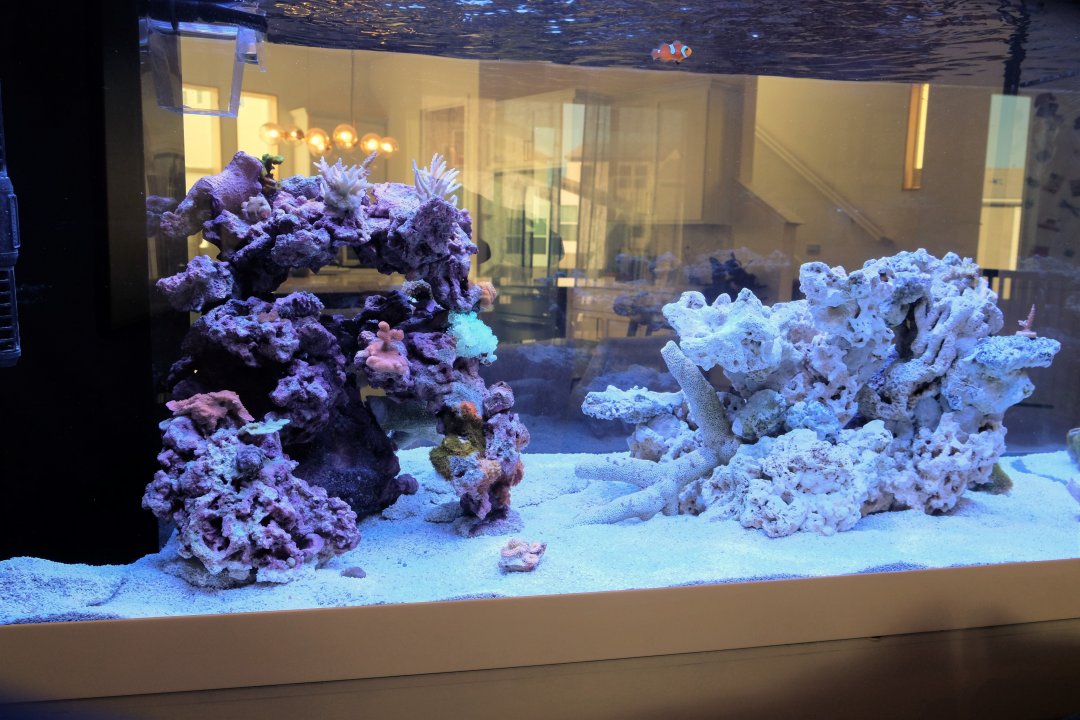 That’s one heck of a set up you got going!! Looking super good! Can’t wait to see how everything turns out!

This is Tyler with Two Tides Aquarium Supply.

It was a lot of fun working with someone who had as clear of a vision for their tank as you did. Makes my job that much easier and more fun haha

I believe we all see the results here, and most importantly the tank is in a place where you’ll be able to enjoy it as often as possible.

We hope that your tank thrives and keeps growing out just like it is now. If you need any other advice, you’ve got my number


To Your Success,
- Tyler Moon

Thanks everyone for the kind words!

Tank is just about at a month old and things are stabilizing. 2 part dosing is dialed in to keep alk at 8.4, phosphates a little high at 0.08, but nitrates have been nearly undetectable. I'm feeding pretty heavy already so may need to dose some KNO3 if they stay that way and colors remain pale. All my SPS that faded during the move have started regaining their color so I'm taking that as a good sign to start introducing more. 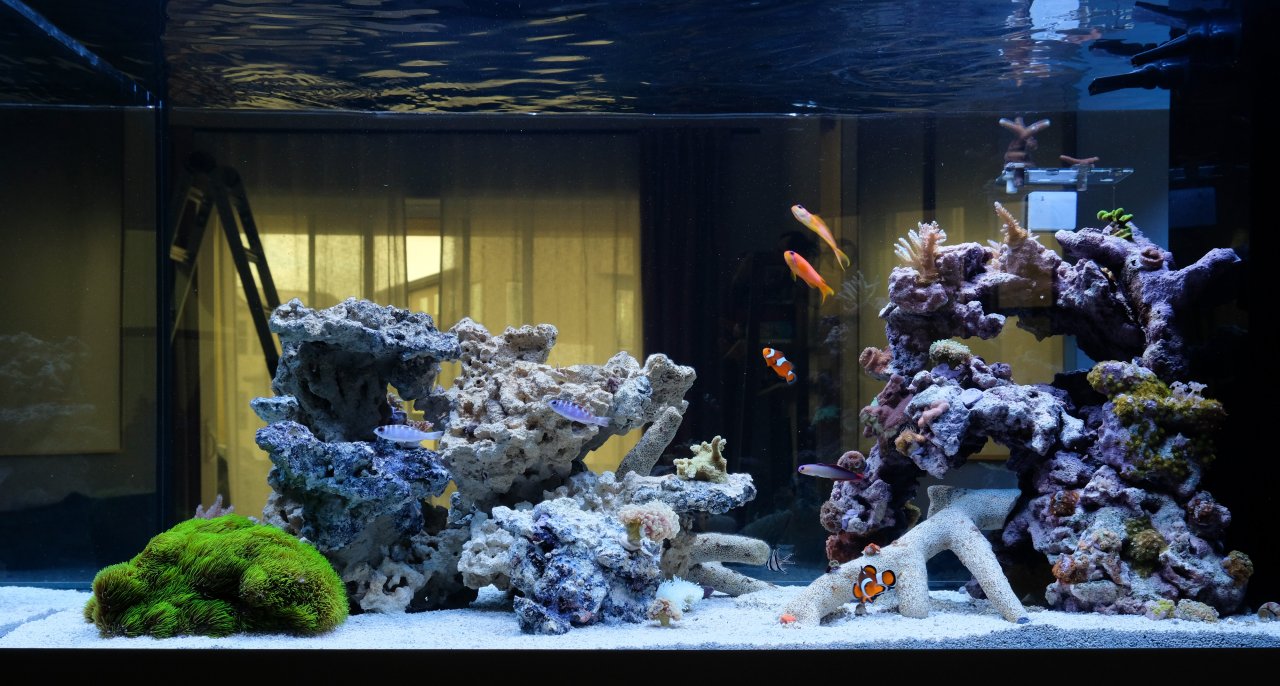 View from the living room and couch 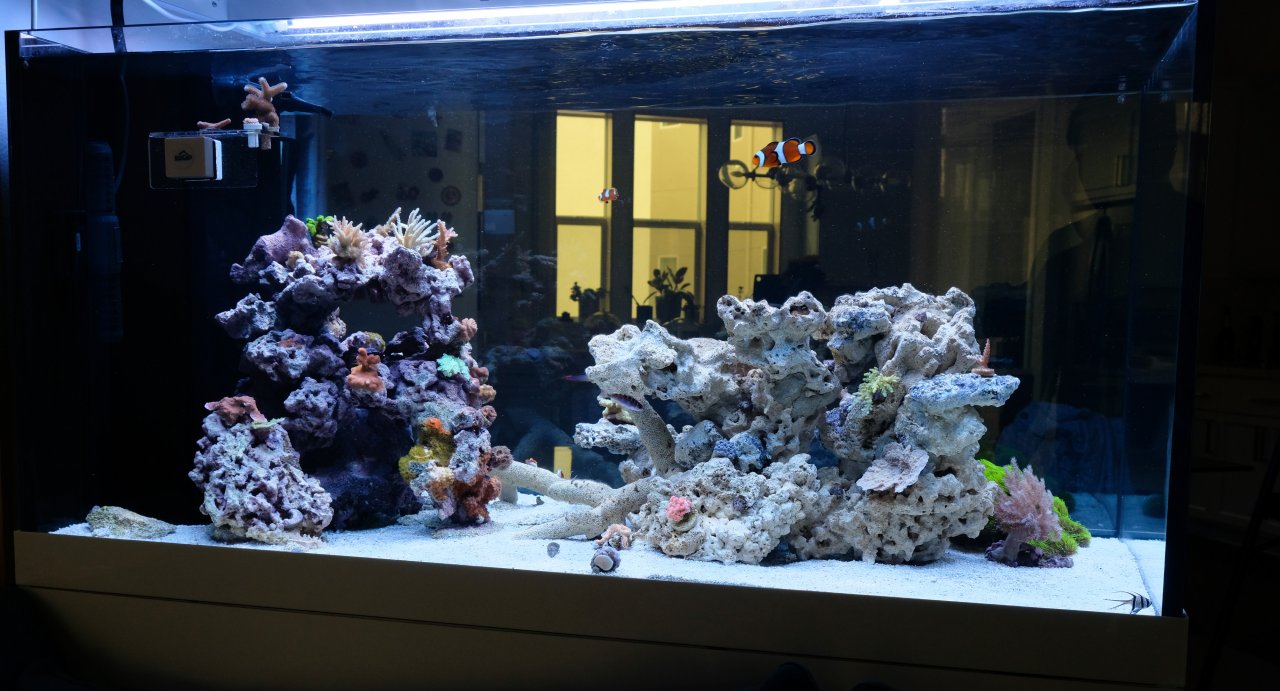 The small SPS garden grown from tiny frags starting 6 months ago. In general I like to start with small frags because the challenge of growing them is most of the fun. Plus the cost savings 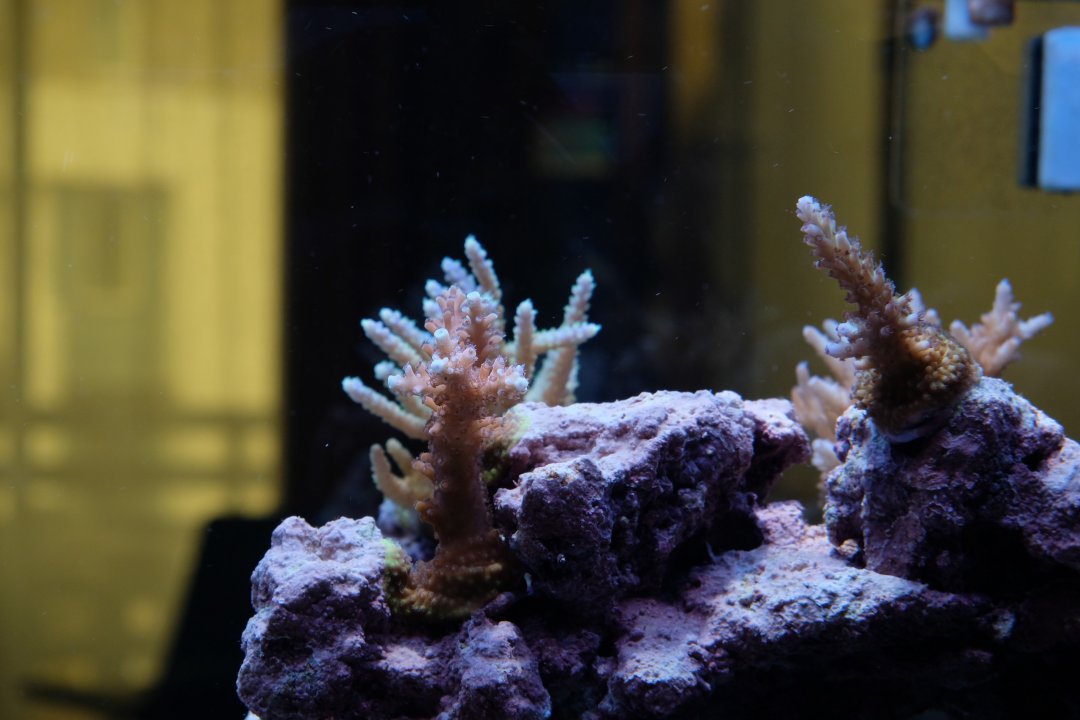 The Vivid Rainbow Delight on the left still has a long way to go in recovering its color. 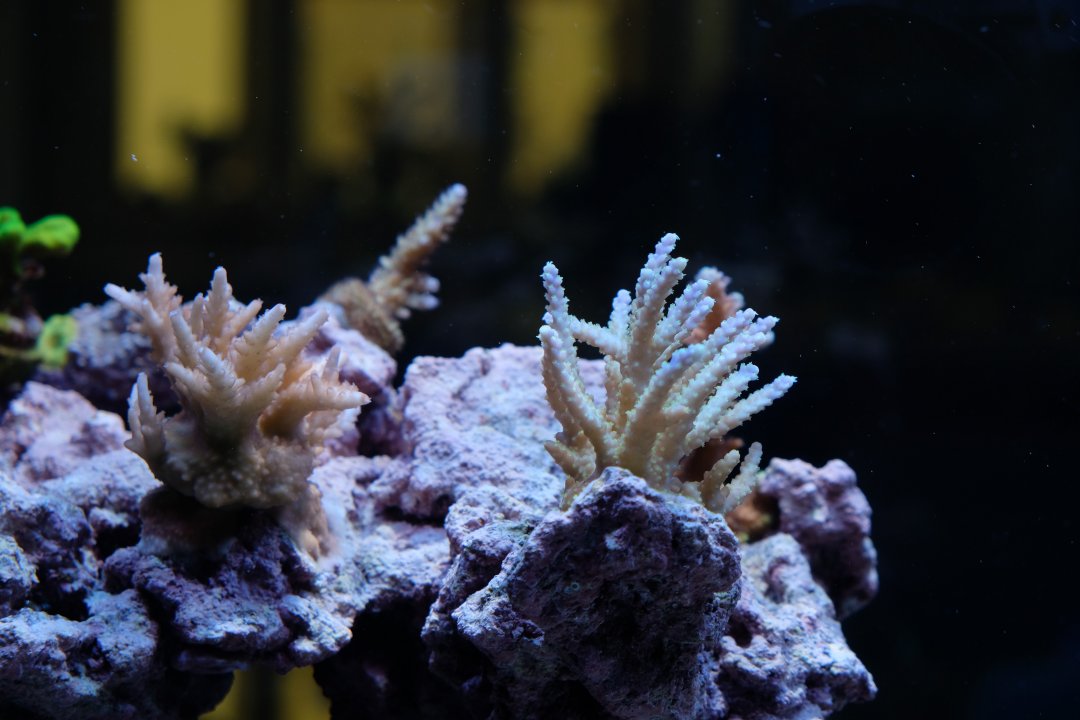 Bought two new frags as guinea pigs before I go wild and fill up all the rock space with frags. RR Pink Floyd which I've wanted forever and a tabling PC Superman. 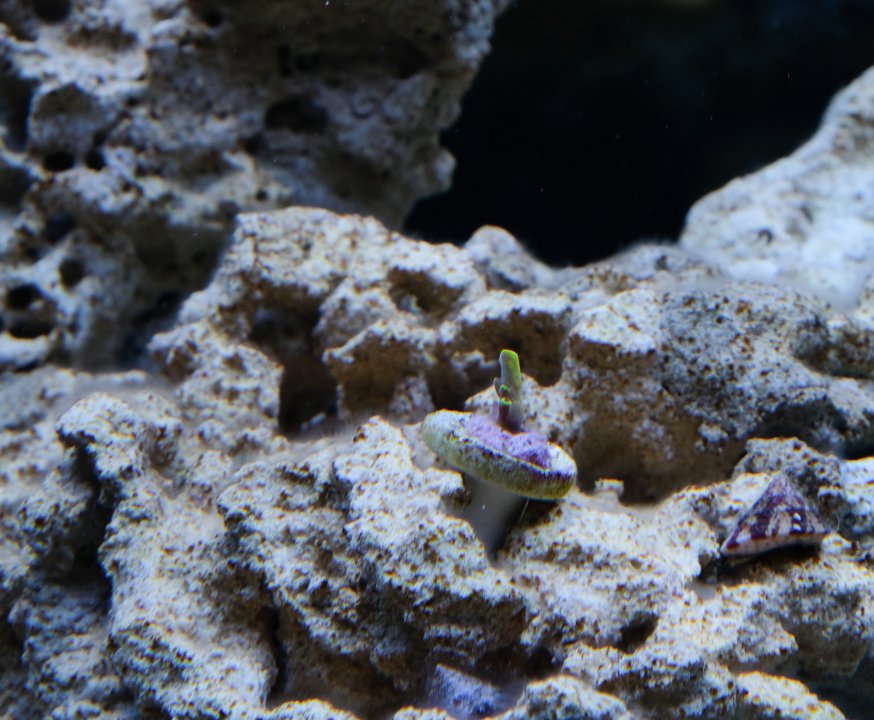 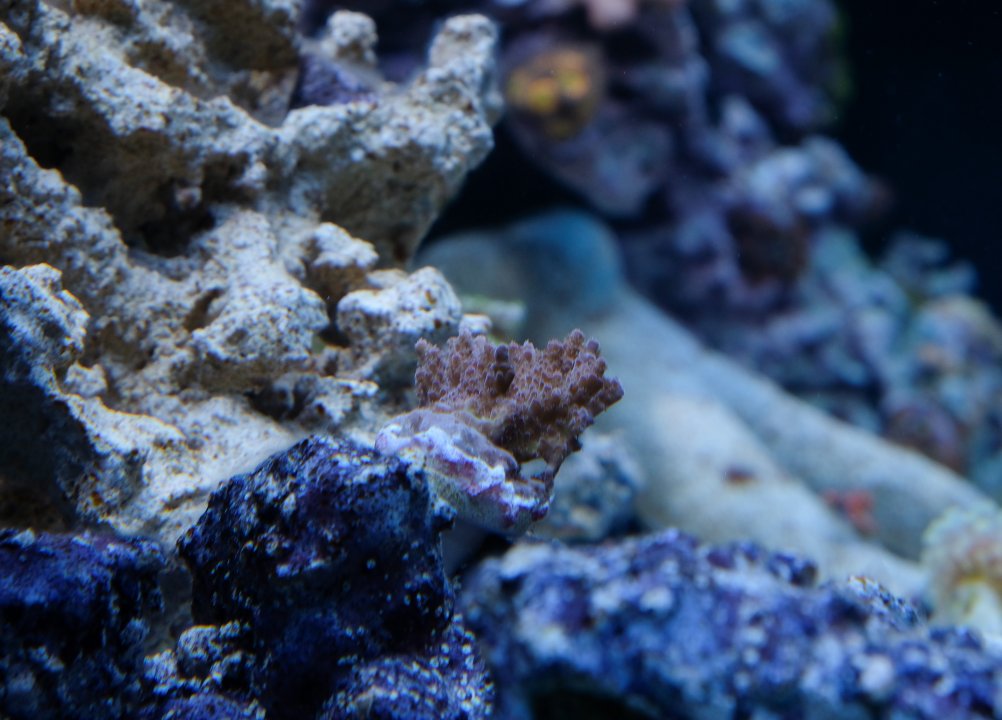 And here's a shot under the hood. 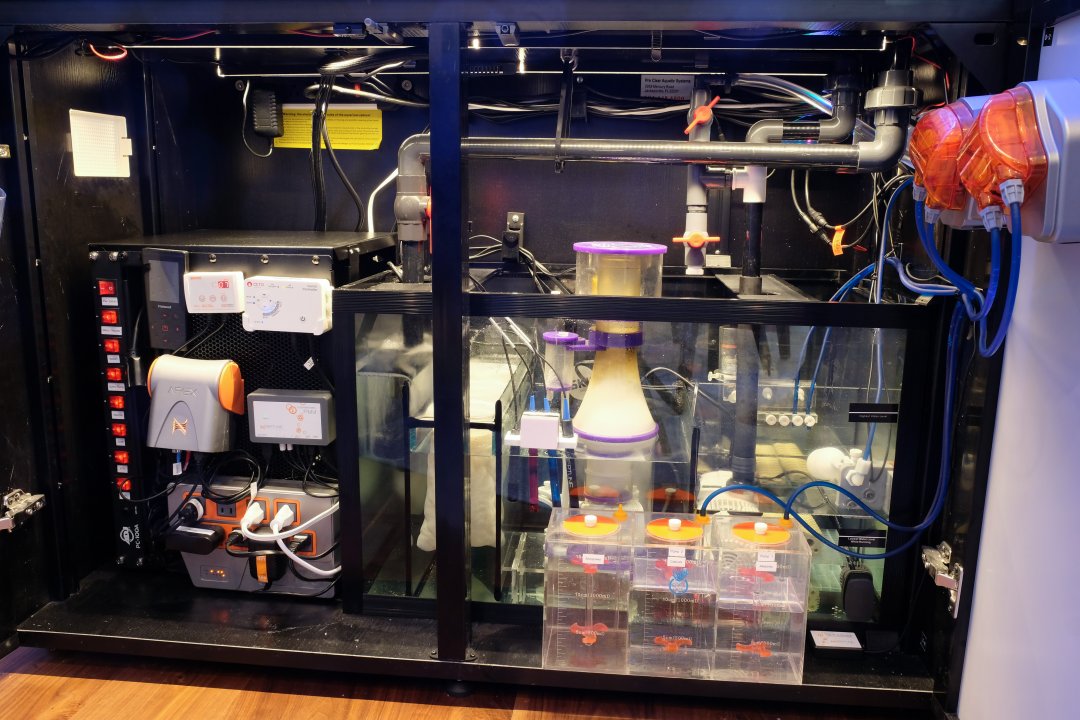 Staff member
The tank is looking really good! How did you get such great pictures?
C

svreef said:
The tank is looking really good! How did you get such great pictures?
Click to expand...

Thanks! I'm using a Fuji X-T20 camera. It was just a matter of taking the time to set it on the tripod, tweaking the white balance in camera, and manually setting the focus instead of letting the camera try to auto determine everything. Maybe when everything's grown out in a year I can justify getting a macro lens

for starter sps frags you sure didn’t hold back. RR pink floyd and PC superman are not usually considered first corals to test your system. From the pics that tank looks extremely tall. Can your arm reach the bottom while moving corals around or cleaning?
tank looks great though, I can’t wait to see it mature.
C

Newjack said:
for starter sps frags you sure didn’t hold back. RR pink floyd and PC superman are not usually considered first corals to test your system. From the pics that tank looks extremely tall. Can your arm reach the bottom while moving corals around or cleaning?
tank looks great though, I can’t wait to see it mature.
Click to expand...

At 24" height it's definitely at the upper limit of my arm reach even when on a step ladder. Most tasks I use these tongs which have been a lifesaver as they're skinny and nimble with just enough gripping strength.

Definitely looking to fill it out with mostly nice(er) pieces I was able to snag a pretty decent $22 deal on the pink floyd nub and $30 for the superman so figured why not.
You must log in or register to reply here.
Share:
Facebook Twitter Reddit Pinterest Tumblr WhatsApp Email Link
Top