I don't follow fish breeding, but this bit from the folks at Coral Magazine caught my eye: 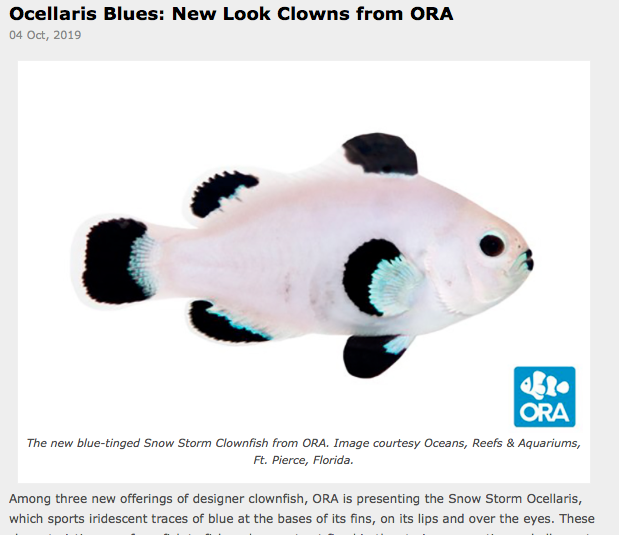 That’s so beautiful! I need to get rid of my maroon clowns eventually and get a pair of these or storm clowns

Man, how’d they breed iridescence into a clown?

wait, are we being sarcastic or is my taste for a beautiful clown really far off? that looks scary.

To each their own. I think it looks great. If I was in the market for another clown, I'd definitely get one of these.

I’ve always been a purest when it comes to clowns. Maybe the black and white ones too.

Staff member
I’m not a purist in the sense that the original is better because it’s the original. But I haven’t seen many if any designer clowns that I thought looked as good as the normal colorations. This one definitely included.

I would call it a panda clown. Pretty interesting look.

gmdcdvm said:
I would call it a panda clown. Pretty interesting look.
Click to expand...

There you go, market it to the Chinese.

Staff member
I'm not a fan either.....beauty is in the eye of the beholder.

So they've been trying to breed the blue in clowns for awhile now. It was first discovered a few years back by one of the breeders but was not consistent. A lot of this has to do with inbreeding...to yield designer clowns.

if you look at most the clowns (occs and maroons, at least) closely, they all have a hint of blue... just a matter of bringing it out more apparently.
Last edited: Oct 10, 2019
You must log in or register to reply here.
Share:
Facebook Twitter Reddit Pinterest Tumblr WhatsApp Email Link
Top