it was a tiny piece shriveled up floating around, the fish ate it as if it was TDO. rip bounce.

Dude, clowns ate your Bounce? What bounce was it?

Maybe you could ask whomever won your cutting of the shroom at CFM for a split?

Maybe you could ask whomever won your cutting of the shroom at CFM for a split?
Click to expand...

Lol I still have another frag if it. So it’s alright.

My issue was I cut the mushroom to soon so both halves were way to small. Didn’t realize that they don’t glue down. And so one of the tiny pieces was just floating and a clown got curious.

First Fish
Picked up a tailspot blenny! Put him in QT and he was hella stressed out. Hopefully the methylene blue dip wasn't too much for him. Guess I gotta name him eventually...
View attachment 9206 View attachment 9207
Side note: I picked a blenny because of its personality and that it eats algae off rock, but also because I saw that it had great coloration. However, I haven't seen this coloration in person yet. Do they eventually develop those colors, or is it a specific breed, or was it photoshopped?? Here is a pic with those great colors...
View attachment 9208

Temp Controller
Installed an Inkbird as a fail-safe against the heater. No chiller yet though. Do I need one for a 20g tank?
View attachment 9211

Blue Disco Mushroom Update (rookie strikes again!)
The good news - the mushroom anchored itself on a piece of rubble rock!
The bad news - after I mounted the rock, I messed with it some more (trimming the rock and attempting to remove the superglue oozing out) and it got dislodged again!!
Man, it was not a happy camper. I really didn't feel like putting it in the basket again, so I just placed it on an upward facing nook in the main rock where it wouldn't get blown away by the flow. To save everyone from suspense (lol), fast forward to a couple weeks later and the mushroom is doing great! Just not an ideal location but oh well...
View attachment 9213

Phosphates Update
PO4 dropped down to 0.018ppm. I removed the GFO for the time being. Does anyone run GFO constantly?
Click to expand...

Does anyone know the answer to the question I had about tailspot blenny colors?
G

Mozby's Reef said:
Does anyone know the answer to the question I had about tailspot blenny colors?
Click to expand...

When I google the question, some say region-specific, yet no one knows what region the colorful variety comes from. But the most insightful comment was that that color morph was a male in breeding mode.

That tailspot blenny is very cool, is he generally peaceful with other tank mates?
Last edited: Apr 2, 2018

Zumareef said:
That tailspot blenny is very cool, he is generally peaceful with other tank mates?
Click to expand...

Yes, they are one of the more peaceful tankmates.

If you’re using the ulr phosphorus Hannah checker then the reading needs to be converted. A reading of 28 is 0.09 phosphates.

Flagg37 said:
If you’re using the ulr phosphorus Hannah checker then the reading needs to be converted. A reading of 28 is 0.09 phosphates.
Click to expand...

Yes I am aware. Specifically, it comes out to 0.0858 ppm. I rounded it up to 0.086. Mentioned in my post about my initial phosphate reading. 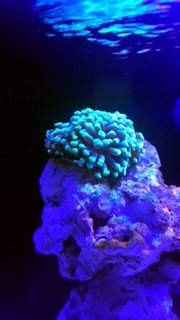 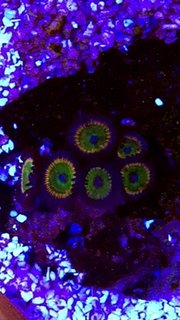 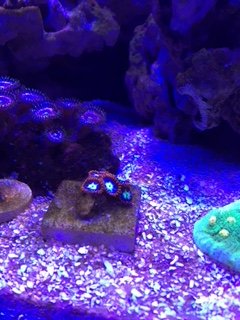 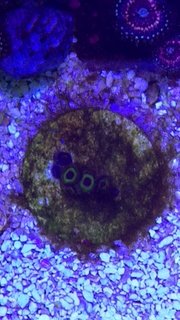 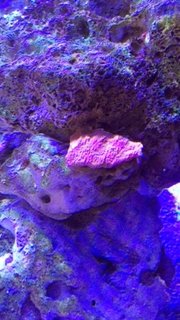 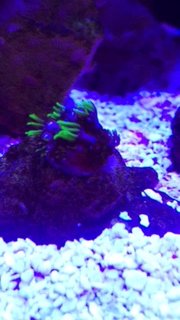 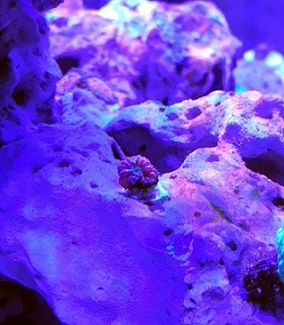 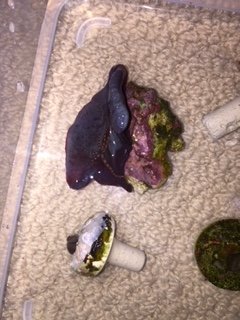 Found a little hitchhiker... ...a brittle star! At first I wasn't sure if I should keep it, but figured it wouldn't hurt to have another detritus eater. 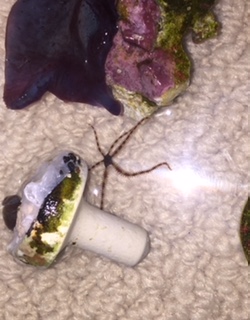 Lastly, picked up a Duncan from CRC: 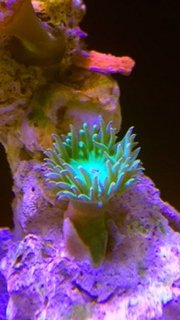 Yellow Watchman Goby + Candy Cane Pistol Shrimp
A symbiotic pair? Alas, that was not on the cards for me or them. The pistol shrimp darted for the caves as soon as he entered the tank and the ywg was oblivious. I was really looking forward to watching them work together. 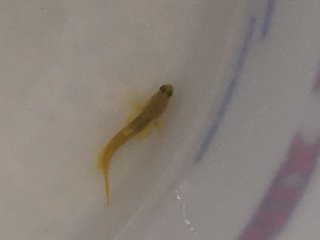 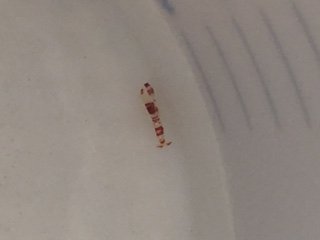 4-Stage RO Buddie + KDF 85/Catalytic GAC cartridge
Decided on this compact system since my water demands aren't much. The addition of the kdf cartridge helps with chloramine removal.
Water results: TDS 0, Total Chlorine 0, Ammonia 0, PO4 0. Mission accomplished. Setup in the guest bathroom to get some water but eventually I gotta mount this thing in the garage. 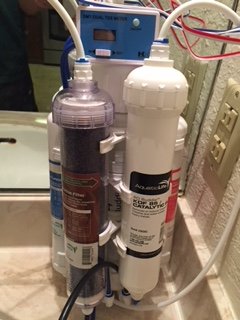 Lastly, picked up a Duncan from CRC:
View attachment 9236
Click to expand...

Those mini brittle stars are a great part of the clean up crew and entertaining. I have a bunch.

Update us on your tank now please!

NelsonCh said:
Update us on your tank now please!

Haha thanks for the nudge. I'm sooo behind..... will try to play catch up real soon.

Blasto, Cleaner shrimp, Colt, Rhodactis, Pink Clove Polyps
Picked up a nice purple blasto and a cleaner shrimp from a LFS (which I shall not name for now due to the story I'm about to tell). At the store, the blasto looked great but the cleaner shrimp seemed a little low energy. I looked around and saw a few dead ones and the rest were also lackluster. Well when I took the little guy home, temp/drip acclimated and put him in the tank... he keeled over within the hour. So I msged the owner and thankfully, he was kind enough to offer a replacement. I asked if I could just exchange it for something of equal value and picked up a colt coral instead. I also picked up a green rhodactis. It was supposed to have orange streaks but seems to have gone away for now. It is oddly sort of heart shaped. (apologies for the terrible shot of the colt). Edit: Forgot to include the Pink Clove Polyps that I got as well. 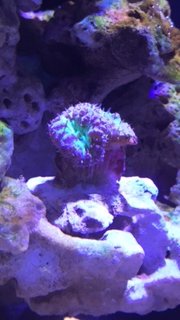 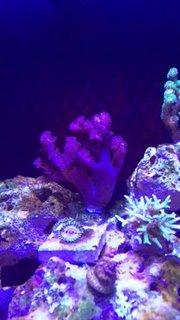 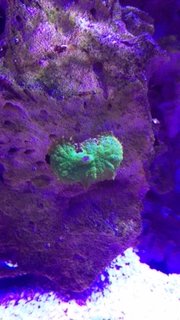 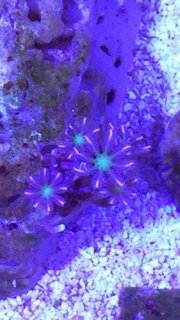 Banggai Cardinal + Cleaner Shrimp2.0
Went to AC, picked up a Banggai Cardinal and decided to try a cleaner shrimp again... This one looked a lot livelier. Spoiler: He survived. 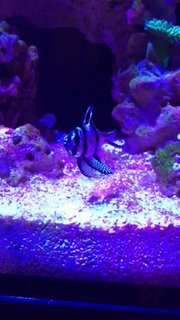 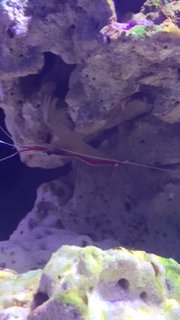 My journal updates have been quite behind. Some of you may have seen my post about giving away the banggai cardinal. Basically, he ended up being the biggest guy in the tank and was the most aggressive during feeding. It affected the way the other fish were behaving and I was concerned they weren't getting enough food, so I gave him away.

Ecotech Vortech MP10!!!
Up until this point, I was using a Koralia 425, but was unsatisfied with the flow as well as the fact that it is just one constant speed. So I gave in to temptation and sprang for the MP10. 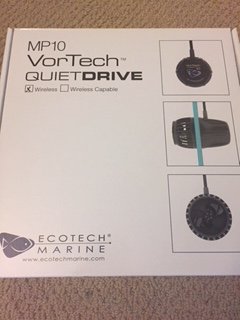 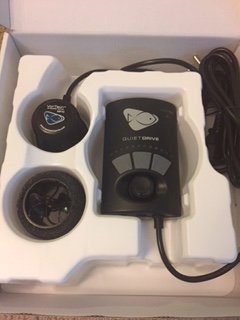 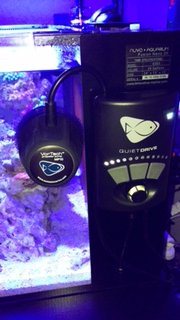 ORA Ocellaris Clownfish
Picked up 2 little baby clownfish. I chose the regular ocellaris type because a) I am told they are the least aggressive and b) My 3yr old wanted a "nemo and marlin" (needless to say reason b was the most important reason). They are really tiny and could not even eat pellets or mysis yet. I fed them flakes and fish eggs. 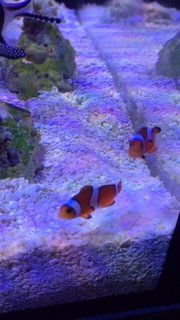 Nice!! I like how much the green rodactis look like they are glowing. The Nemo and Marlin story is hilarious. Glad your daughter convinced you to get a pair...

Big question is... Has she seen Finding Dory? If not, I am very curious as to what she will want from that movie!

NelsonCh said:
Nice!! I like how much the green rodactis look like they are glowing. The Nemo and Marlin story is hilarious. Glad your daughter convinced you to get a pair...

Big question is... Has she seen Finding Dory? If not, I am very curious as to what she will want from that movie!

I really hope the rhodactis regains some of its orange streaks that I saw. Dude if my daughter had her way, she would want Dory and Hank in the tank as well! No blue tangs and octopuses for me, thank you very much. She will have to settle for enjoying them at Monterey Bay Aquarium .
You must log in or register to reply here.
Share:
Facebook Twitter Reddit Pinterest Tumblr WhatsApp Email Link
Top