With my sps going hog wild in my tank, i finally decided to get around to installing the DOS. But with zero room in my cabinet, I wound up building a small stand that would go above my chiller to save space. While I was at it, I wanted to clean up the mess of wires inside my sump cabinet, too-- my Apex and energy bar were just stacked on top of my ATO reservoir-- i mean, what could go wrong?? Lol.

Anyway, had some reclaimed planks lying around and whipped this together. Quick and dirty.

I mounted the Vectra controller, Apex brain, and EB832 to one of the sides... pretty happy with the results -- albeir superficial. The mess of wires has now moved from inside my cabinet to behind my stand. One day, I'll get around to cleaning up those wires for good

Only pisser is that my vectra went into some sort of safe mode whe. I turned the apex back on... so the waterline in the sump was way too high, and my skimmer spilled cups of asudge back into the water column. Ugh. 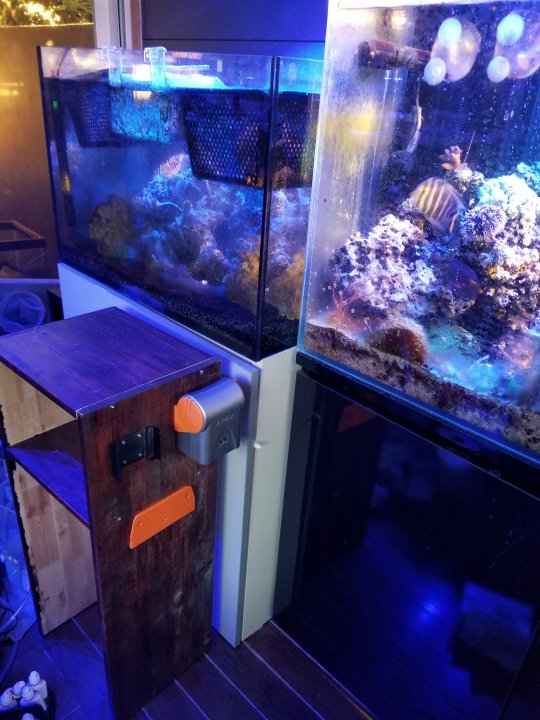 So after going through all the hassles of migrating my apex and running all the wores to my new stand, my trident went stupid in the process. After reconnecting, it stuck on thinking there's no water sample and repeatedly primes and attempts to initialize itself... after a quarter gallon of sample fluid wasted, i did a shutdown ans factory reset, and new start procedure in hopes it will get its bit to unstick. Hate to file another support ticket for this thing. Grumble.

On a happier note, got to play hooky again today and ran up to AC while I was nearby-ish for a reef pickup. Got a few nice pieces... sadly, i ran out of time so couldn't do a loop down to Neptune before home.

But i did get to pick up some fire for the tank. 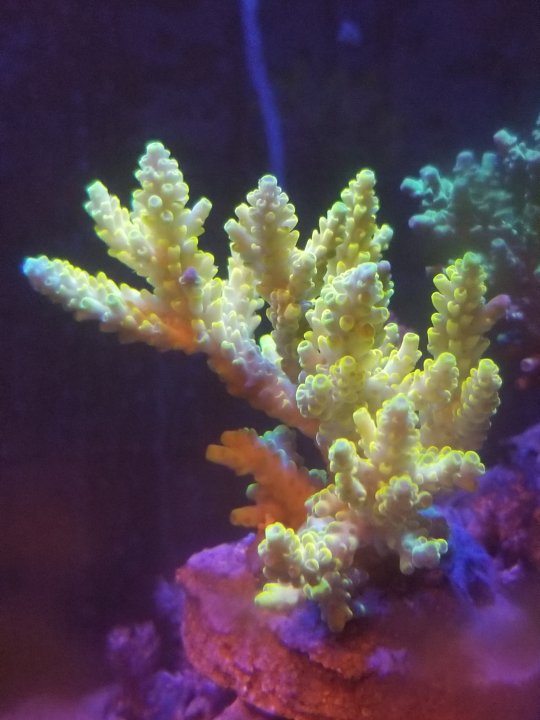 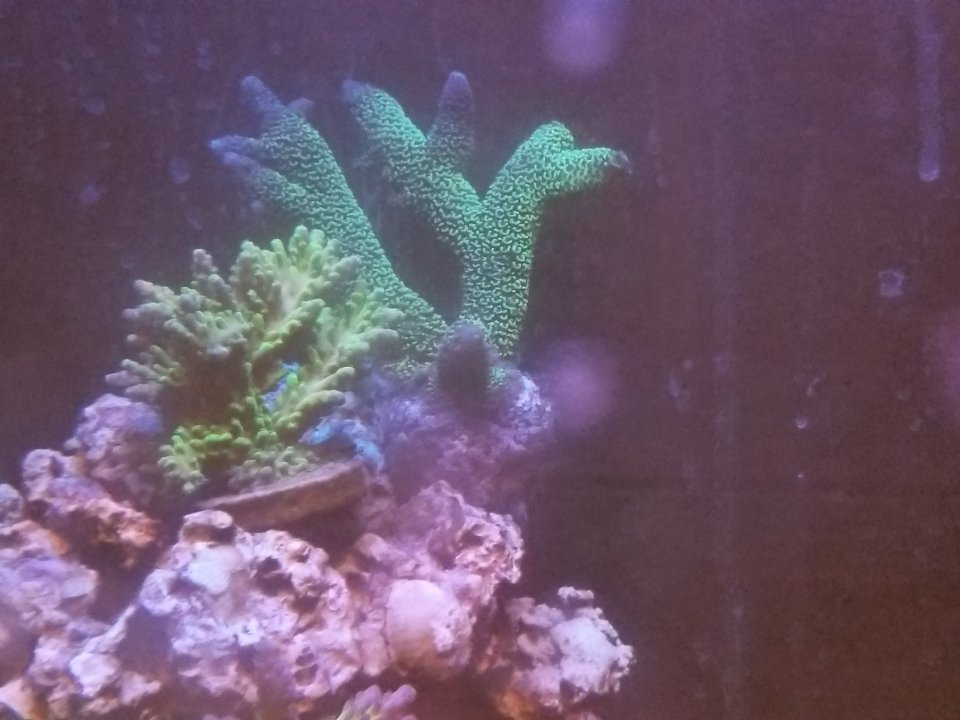 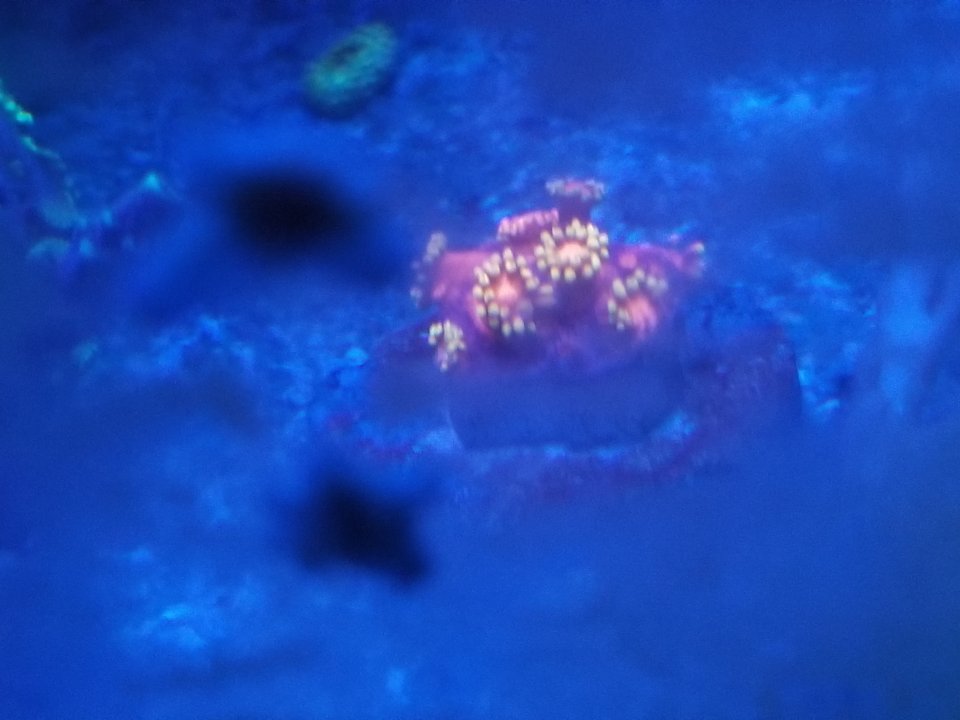 that yellow acro is nice. What is it?

ofzakaria said:
that yellow acro is nice. What is it?
Click to expand...

WB 20
===
F-ing pods have done it again. My Sang CSB momma split some time ago. All have been seemingly well, even up to this morning when i fed the clowns. But right before bed this evening, i went to tuck in the tanks and saw my split being torn apart by amphipods again. Ugh.

Was a larger 4-5" natural split off the momma too... have it soaking in cipro now but doesn't look good. Same thing happened in my supernova tank (elos 70) a few nights ago.

I need to go on a pod eradication campaign. Before turning to drugs and chemicals, I've been looking for large mandarins but only found small ones... need ones that can suck down 3/4" pods.

I am temped to dip all my rocks in melafix and similarly melafix bomb my tank (after removing the nems)...then run carbon after a 100% water change to clear out any leftover. Only worry is i might create a mini cycle as a result.

Finally got around to setting up a DOS to work with the Trident. Moved a bunch of thing around and got creative but overall pretty happy with the setup, even if it meant putting my 1/15hp chiller on top of a stand so that my dosing liquids could fit underneath.

For containers, i found some 1.25G pantry storage containers from Target that were perfect dimensions. Still need to find some 1/4" OD acrylic tube to install a proper siphon but a loose tube will do for now. 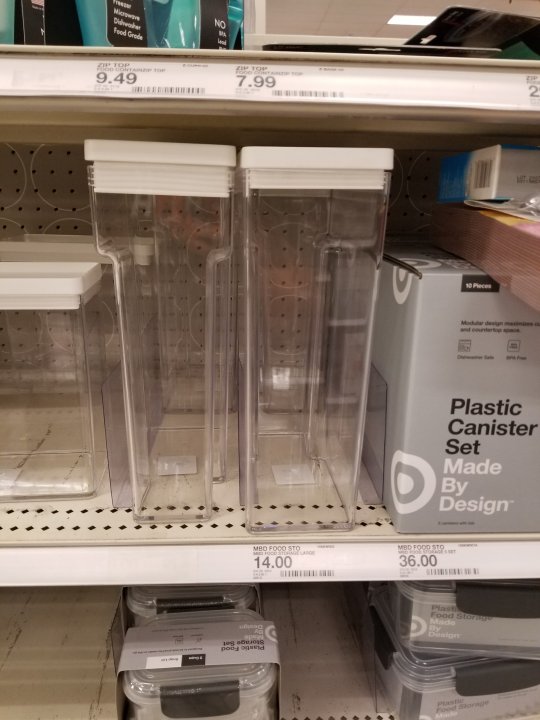 For dosing liquids, I decided to try RFH's 2 part recipe using washing soda and prestone driveway heat. Yes, recognizing purity may be questionable but my modified mixing of the formulation is probably equally questionable. I departed from the recipe a bit since I am using store bought washing soda rather than bake my own so had to made some quantity adjustments. Stoichiometrically speaking, the math works out to be 0.63 soda ash to 1 baking soda. So adjusted accordingly.

That said, i had a fair amount of solidified precipitate of soda ash in my solution. So, my alk concentration is probably 25% lower than RFH's recipe 1 alk solution based on eyeballing the leftover precipitate.

Despite that, i decided to go slow and ranp my dosing until I get to my target range. Based on my nightly dose of baking soda, i should be dosing 121 ml of Alk per day based on some quick math...reefing calculator tells me about 35ml /day of Recipe 1 alk...but RFH's page says 1 ml per gallon so closer to 115 ml/day. Happily, my math is spitting distance from RFH's recommendation. But, I decided to go lower just in case... and used a midpoint between the reef calculator and RFH's with the ultimate goal of getting to th 115 line. Just don't want to alk shock the system. But now the real risk is a system with lower alk than my target; however, between lower alk within range versus alk over, i'd take the lower alk anyday.

My only challenge is Ca. I typically dose with sea lab cubes so have no idea what my dosing level is. I don't have to. So, for this, I am going to match my alk dosing volume as a starting point. Idea being that it would at least be a balanced dose.

Starting their new life amongst a basket of SNs...

Couldn't decide which tank to put them in so keeping them here until they grow bigger. Plus, lets me keep an eye on them during the transition. 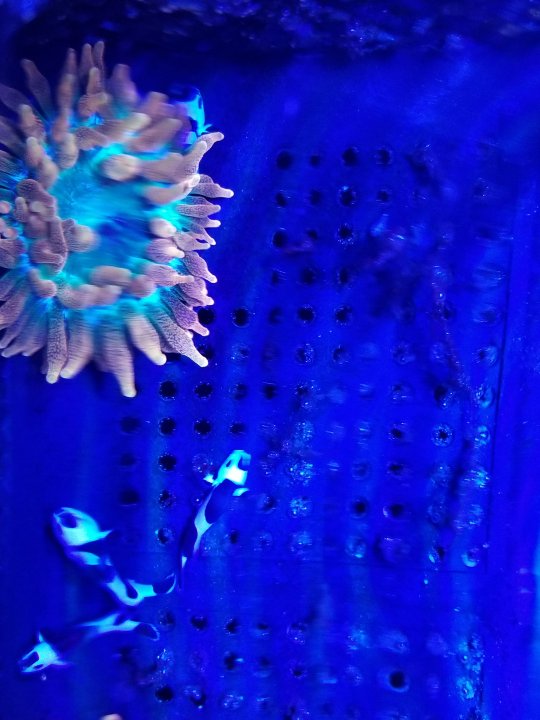 Amazingly, my scoly is hanging tight sodeways in the box despite being flipped. 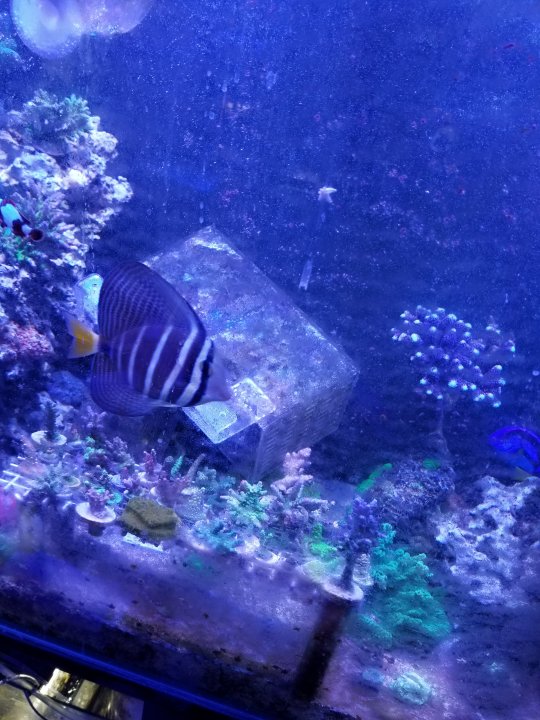 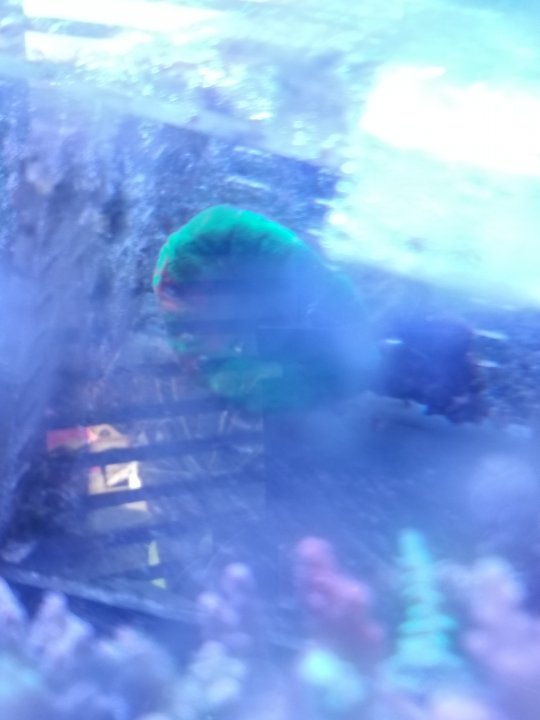 Maybe i can save a bit of the remaining tissue. Not sure what is causing the issue. Only issue wi thg my tank is been lax on topping off ato. So tank ran dry/low overnight.

Not the first time but i think the excess bubbles might have contributed. Always slimes up pieces.

Other than that, haven't a clue. Perhaps my pH might be an issue. Need to check calibration on my probes. 2 probes. One reads 8.3 the other now reads 9. Dunno which is right anymore

Staff member
It can’t be 9. Is that even possible?

Maybe i can save a bit of the remaining tissue. Not sure what is causing the issue. Only issue wi thg my tank is been lax on topping off ato. So tank ran dry/low overnight.

Not the first time but i think the excess bubbles might have contributed. Always slimes up pieces.

Other than that, haven't a clue. Perhaps my pH might be an issue. Need to check calibration on my probes. 2 probes. One reads 8.3 the other now reads 9. Dunno which is right anymore
Click to expand...

Yeah, i think one if not both of my probes are lying. I might have mixed up the two probes with their respective ports when i moved the apex. If so, the calibration offsets might be swapped.

I have some old (used) calibration packs lying around thatvi used to recalibrate last night out of deparation. New number fall around 8.4... better.

First sign something was off was my rodi being read at 9.25. Should be 7 but typically lower as rodi tends to be more acidic over time.

Now it makes me wonder how off my pH was previously

NanoCrazed said:
AquaJapan 85
====
Looks like my pH probe drifted... at least i hope so.

I have some old (used) calibration packs lying around thatvi used to recalibrate last night out of deparation. New number fall around 8.4... better.

First sign something was off was my rodi being read at 9.25. Should be 7 but typically lower as rodi tends to be more acidic over time.

Now it makes me wonder how off my pH was previously
Click to expand...

Deionized water will never usually never show a pH of 7 because there are not enough ions in the water for a pH electrode probe to work correctly.
Last edited: Jul 19, 2020

The sight of my two pH probes agreeing is making me very happy! all about the small wins these days! 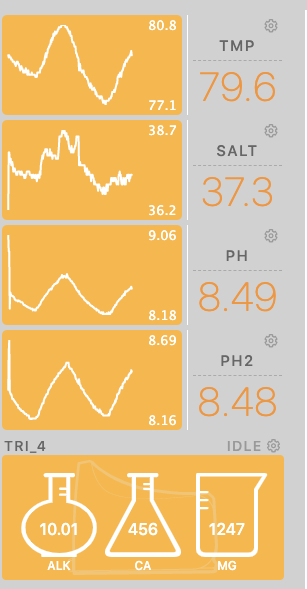 One downside of Trident controlled dosing... my alk drip line slipped loose out of the sump somehow. 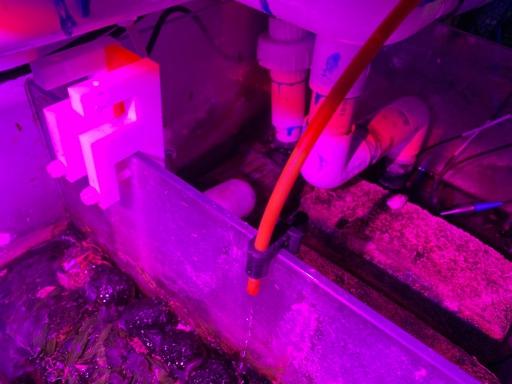 Yeah, been meaning to order more
Had a stash but forgot where i left it.

My line was tied to a jig in the mean time... mist have accidentally knocked it loose while emptying my skimmer cup

AquaJapan 85
====
Good grief! Just discovered this morning... While cleaning up the alk spill last night I accidentally knocked loose my Trident waste line under a bookcase... at least combined test worth of liquids are probably somewhere underneath that I won't be able to clean. Maybe the effluent is good for hardwood floors? $%^#!!!
You must log in or register to reply here.
Share:
Facebook Twitter Reddit Pinterest Tumblr WhatsApp Email Link
Top