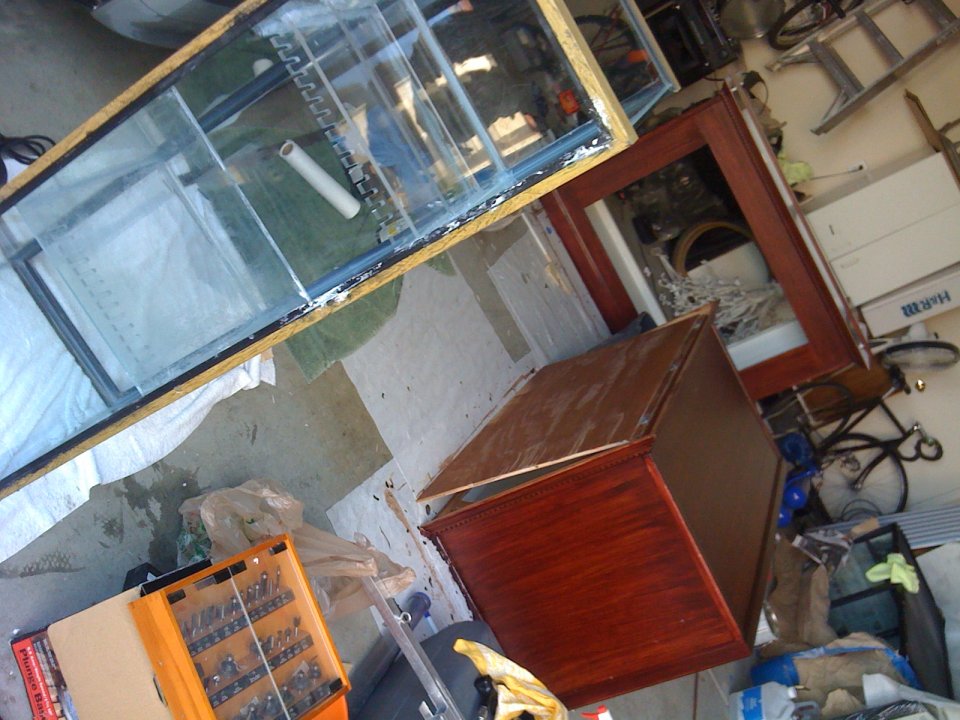 On the way to it's final destination... 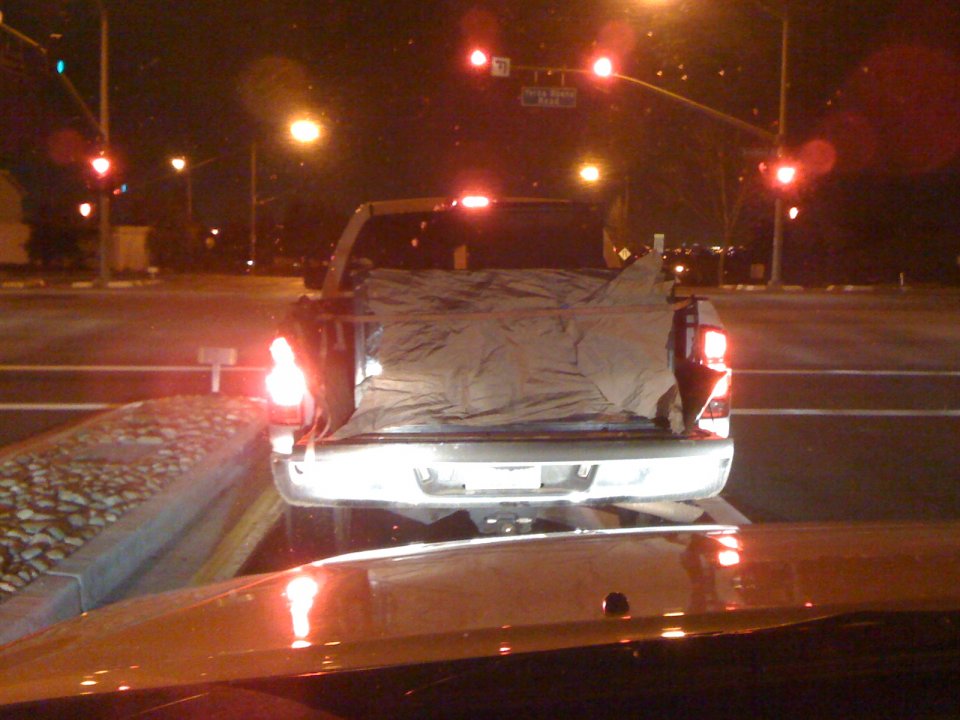 My first time building a canopy and stand... not too shabby =) (need to build doors though...thought it would look good without at first) 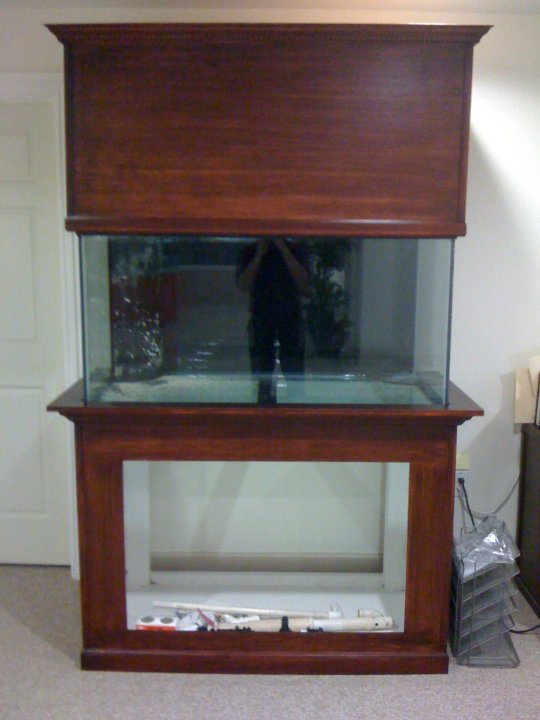 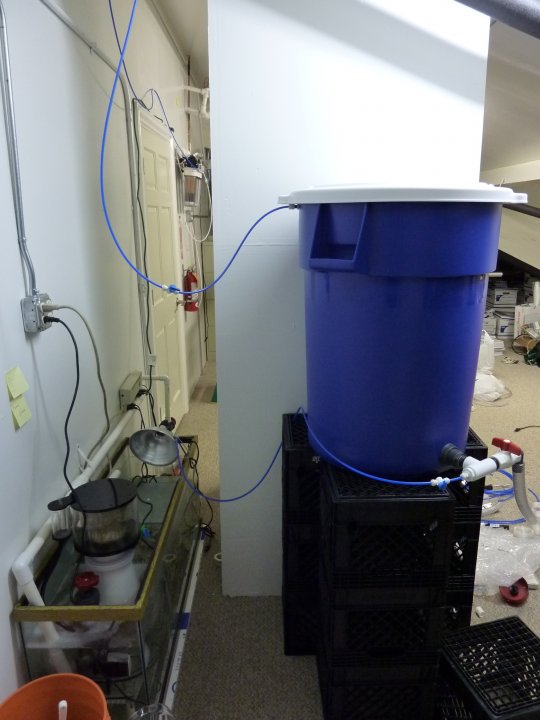 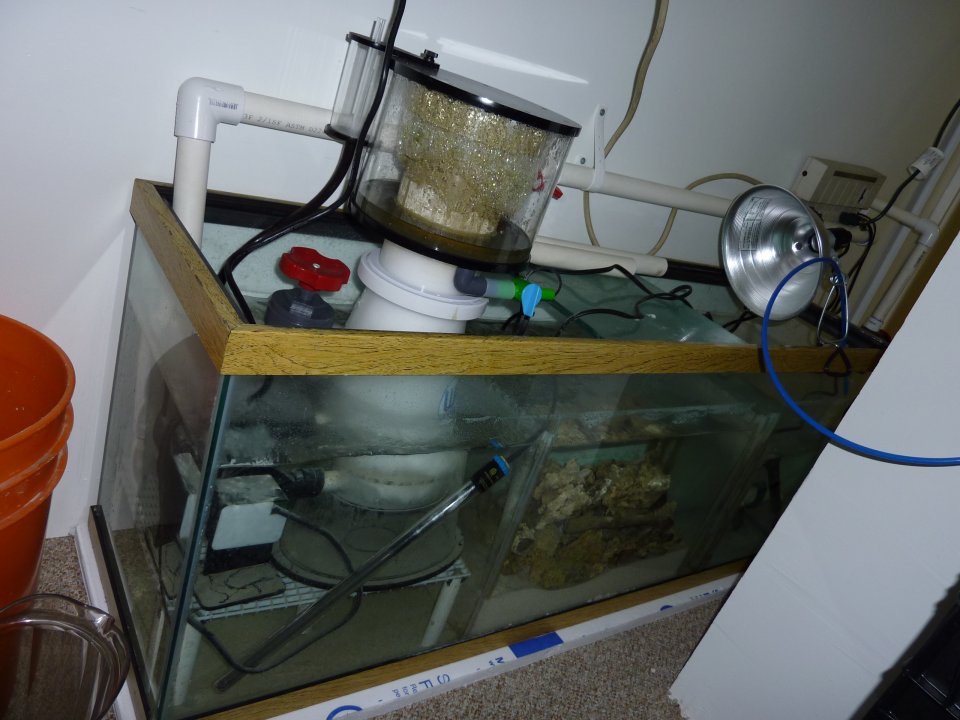 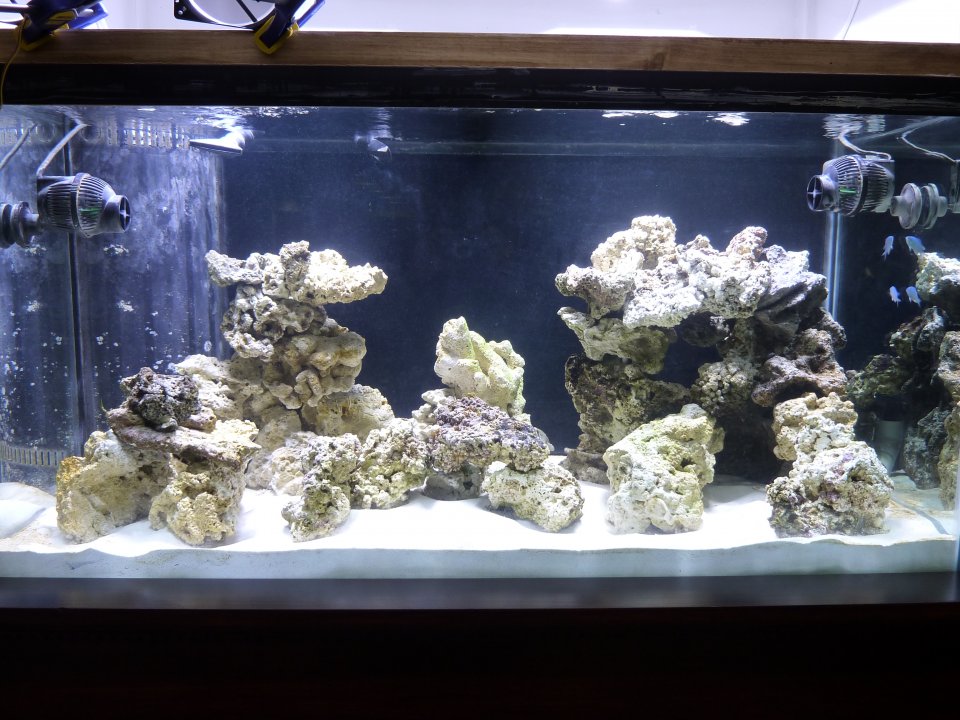 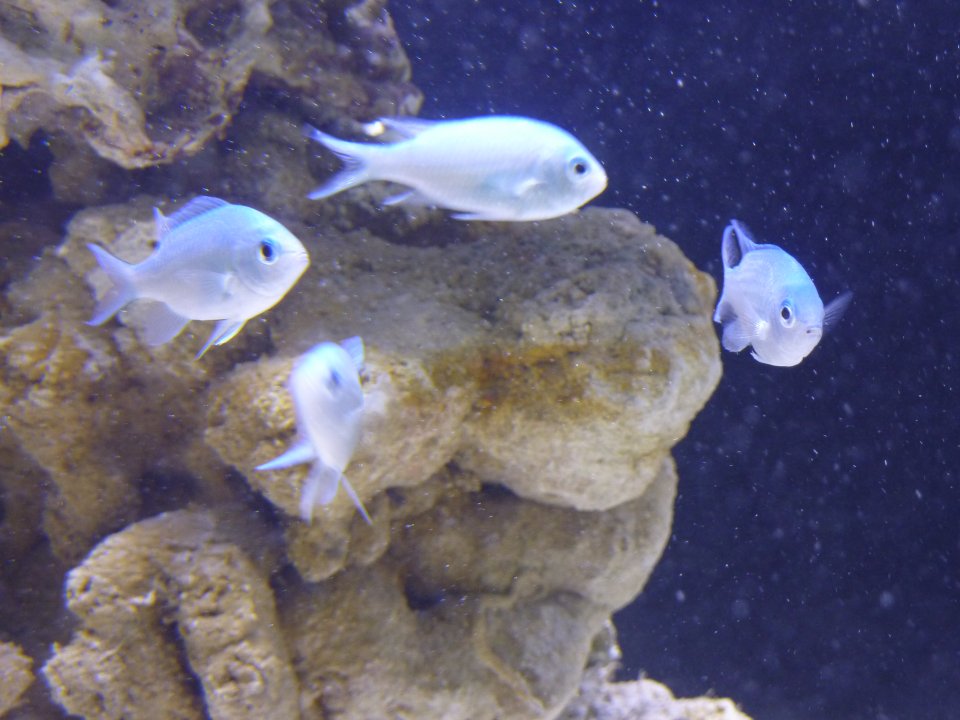 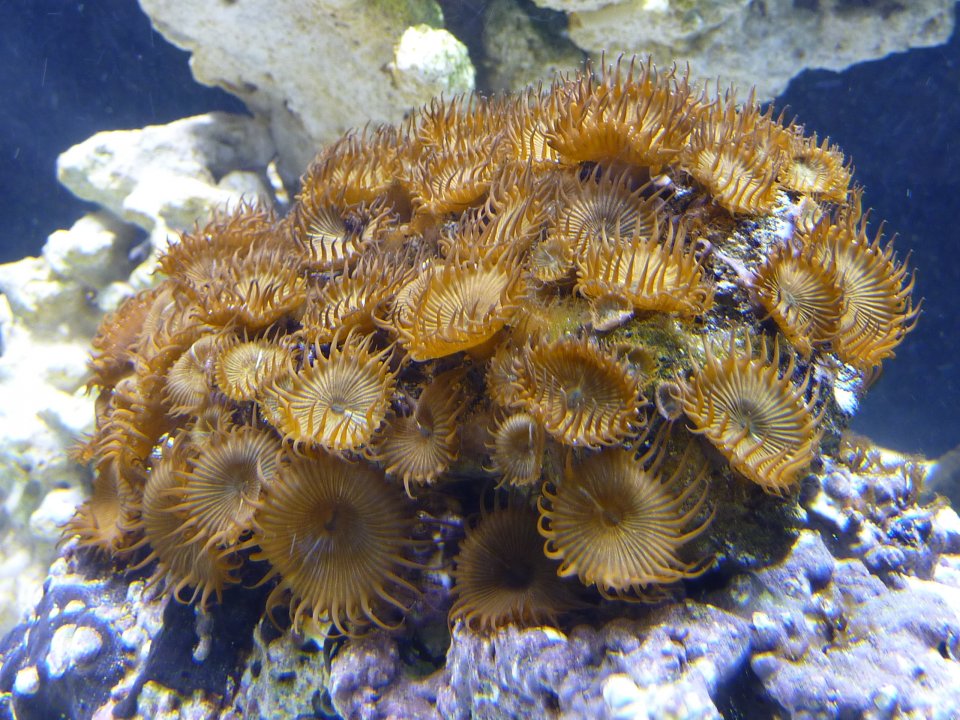 Nice aqascaping! did you use acrylic rods for the towers? Also, why such a large canopy, care to show the insides of it?

Pendants need at least 15" bulb height. It's at about 14.5" right now. I could have cut a few inches of canopy, but I actually think it fits nicely with ceiling height, looks like a wall cabinet. Still have to cut holes in sides for my 120 mm fans.

Had to fix some rocks touching glass in back, and like Viet told me, once you touch it, it won't go back the same!
FTS #2

Do yourself a major future favor. Do not leave those button polyps in the middle of your rockwork. If you want to keep them in your tank isolate them or they will be a major problem later.

Thanks for the heads up Semi. I did plan to let it grow onto one more rock, since I'm going to frag it to a friend who is setting up tank right now. Do you know how long they usually take to polyp out? Days, weeks, a month?

Their resting place will probably be on the sand in the front middle later.

In my opinion it can be just as bad. I would move it to the sand

Thanks John. Some of your rock is in there too! =)

Great job, Jimmy! Thanks for posting the photos. I am impressed that you guys built the stand & canopy yourselves. Where did you get the fans for your canopy?

haha......probably way ahead of ourselves by saying this but Jimmy and I think we have a pretty good grasp on stand and canopy building now. All the different things I learned building my stand went into his stand....so it turned out really nice. But he did a real good job finishing, I don't think I'm that patient. I think the next project we'll be doing is a stand for an 18x18 cube.

VietNR1 said:
haha......probably way ahead of ourselves by saying this but Jimmy and I think we have a pretty good grasp on stand and canopy building now. All the different things I learned building my stand went into his stand....so it turned out really nice. But he did a real good job finishing, I don't think I'm that patient. I think the next project we'll be doing is a stand for an 18x18 cube.
Click to expand...

Stand and canopy look nice! I might need some help in the future.

John, we'll try our best. Don't blame us if it looks too good for you. :bigsmile: jaykay

Anywho, got a case of Bryopsis and some other hair algae... and I got this adorable little fella. Fatty McFat Fat, with his rabbit pellets all over the sand... 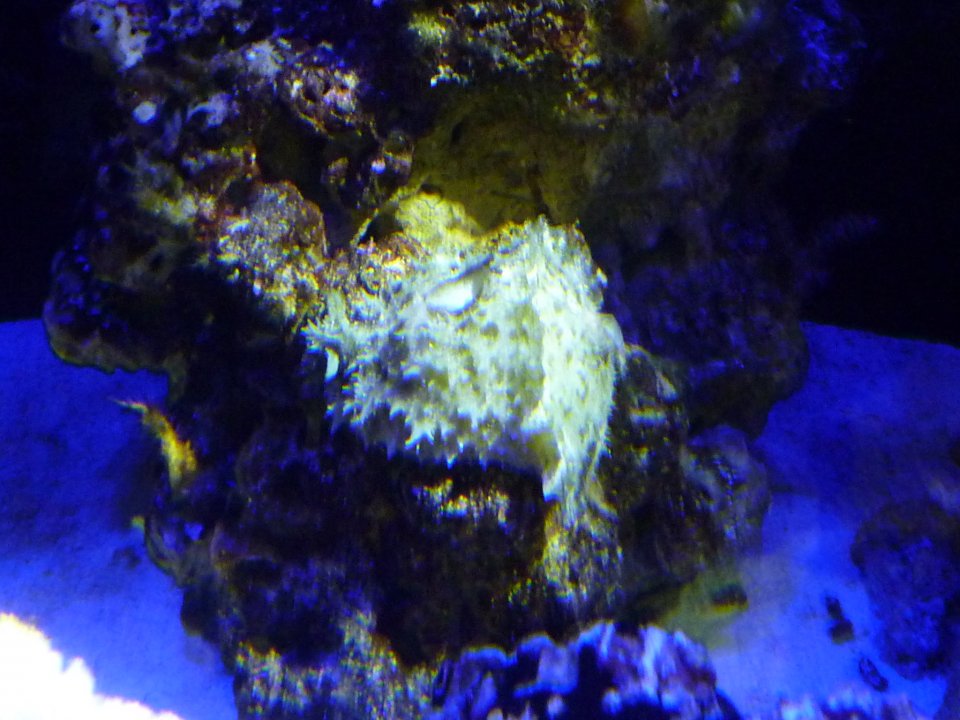 Will have to resort to Tech M if he doesn't work out in a few weeks. Gonna pass him on to Viet after, and then any one else that needs him can use him. Or is it a her?
Last edited: Apr 12, 2019

Yellow Jellow - Props for using the term "fatty mc fat fat" Where'd you get that from? Me and my buddies have had some serious laughs around conversations with this term in it hah. Nice set up.

i've no idea how we got it, but VietNR1 used to call me that all the time cause i'm a fast food junkie.

I have re-scaped a little and added more tank mates, so I'm due for new pics. I'm saving up for a 100mm macro lens also. Plus I need new bulbs too. Thinking Hamilton 14k 250w or Ushio 14k. Can't do Phoenix cause I have Single Ended.

I'd go with Ushio. Check out Sanjay's lighting guide if you haven't already. http://www.manhattanreefs.com/lighting

Haven't updated the journal for a while! I've learned so much within these first 6 months, good and bad.

- One of the rocks on my tower had a Hydrozoa infestation, so I took it out and nuked it, waiting it to finish curing to put back
- Got AEFW, thought it was RTN, I think I got most of it out, still battling a little
- Had a growing Hair Algae problem, RO/DI unit was due for filter change, PLUS totally forget to change out the GFO and Carbon of the BRS Reactor, after I changed it out, it's under control now

I'm going to try to pull all the fish and QT for 2 months with Hyposalinity and really rid the tank of ich.

After DT is rid of Ich, I still want a couple more fish. Probably won't try Achilles again. I really wish for a 2nd tang, maybe Powder Brown, Whitecheek, or Sailfin. Would QT the Yellow Tang while acclimating new guy.

And maybe 1-2 more wrasses, or male/few females of Anthias.

I've been dosing less of the Essential Elements, Iodine, Strontium/Molybdenum. I would usually do once a week, then I cut it down to twice a week, and I think I skipped a whole month, now going to try to bring it back to twice a week or once a week. Any suggestions?

Sounds like you're in a battle that you'll conquer and ce out on top. Is your apex using a cable or are you using wireless? If you're using wireless how did you set it up? Wireless access point?

I used a cable, easiest and it is close to my switch.

I haven't really shopped for routers/access points in a while, but if you go that route, I believe just getting a cheap router and programming it to be an access point is cheaper than buying a real access point... not sure about now though. I might have some CAT5 cable left from a roll... how many feet you need?

My clown is fighting ich, but I'm lagging on my QT. It's fully setup now, but the temp in the backroom is at like 92 degrees during the day. I'm contemplating on getting a temp controller for the fan. I would run a fan now, but I'm not sure what temp it gets at night. Will need to do trial and error.