Kensington Reefer said:
In my experience they get to the wholesalers starving and in poor condition. They are then all lumped together and they beat on each other and are stressed to the point that they don’t eat. It’s downhill from there. I wish you luck with this beautiful species.
Have you had them long? I would offer generous servings of Cyclopes, daphnia and marine mysis with some crushed flake foods in between.
Hoping for successful long life, but not surprising if not.
Click to expand...

Gotcha. We bought these from Aquatic Collection on January 28th, so we've had them about 3.5 weeks.

So far they've been eating very well and integrated (mostly) peacefully alongside our tank's other inhabitants. The pretty-sure-it's-becoming-a-male lyretail will sometimes chase (what I presume is) the male chromis, but it's more of a *grumble grumble* type chase than active bullying/attempted harm. I suspect part of my phosphate problem was due to higher-than-necessary feedings coupled with my own inexperience managing higher bioload, but I figure the extra food gives the fish more opportunities to eat and helps stem aggression. That's a problem I'll gladly take, since higher phosphates are easier to manage than dead fish.

IOnceWasLegend said:
Gotcha. We bought these from Aquatic Collection on January 28th, so we've had them about 3.5 weeks.

So far they've been eating very well and integrated (mostly) peacefully alongside our tank's other inhabitants. The pretty-sure-it's-becoming-a-male lyretail will sometimes chase (what I presume is) the male chromis, but it's more of a *grumble grumble* type chase than active bullying/attempted harm. I suspect part of my phosphate problem was due to higher-than-necessary feedings coupled with my own inexperience managing higher bioload, but I figure the extra food gives the fish more opportunities to eat and helps stem aggression. That's a problem I'll gladly take, since higher phosphates are easier to manage than dead fish.
Click to expand...

So the algae that I thought was green cyano or spirulina, turned out to actually be euglena (a single-cell flagellate organism more similar to dinoflagellates than to algae). 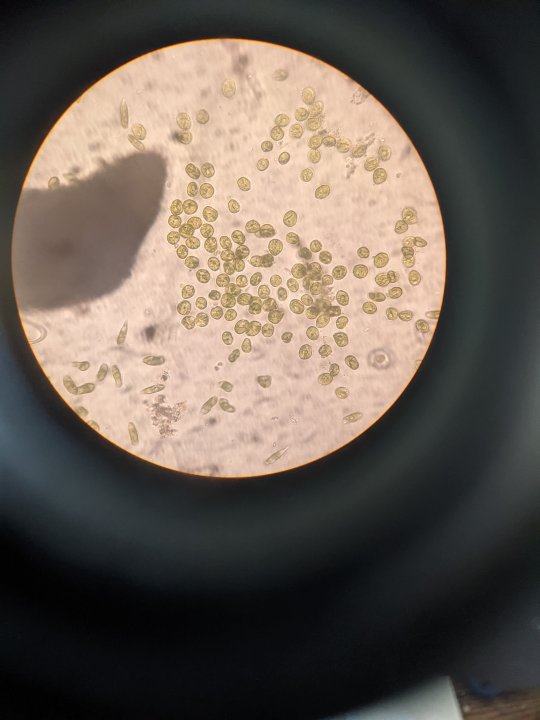 My first line of defense was to set up an in-sump UV sterilizer (specifically, an Aquatop UVE-13), as I believed it to be going into the water column at night (gunk clearing up at night on the sand, and coming back over the course of the light cycle).

After about a week of this, I realized the sterilizer didn't seem to be doing much in and of itself (no reduction in euglena during the day), so I hypothesized that:
I did a 36 hour blackout (8 PM lights off Monday night to 8 AM lights on Wednesday morning). At the start of the blackout, I added the indicated amount of Microbacter 7 to the indicated amount of tank water, took a turkey baster, and 'injected' the bacteria into the sand. I rationalized this would kick euglena up into the water column, along with getting the bacteria into the sand where they could compete. While I had euglena all over the sand bed, I only did this in the center of the tank (so I'd have an experimental condition, and a control elsewhere).

72+ hours after the end of the blackout, I don't have any euglena and the sand looks nice. I don't think the bacteria did anything (no appreciable difference between the 'treated' sand and 'control' areas), but it's nice to have clean sand again. I'd also like to note that, as John pointed out, this was 1) an extremely short blackout period, and 2) it's surprising that such a short period had such a significant impact on 'pest' microorganisms. While I'm curious/surprised, I'm not complaining at all.

Picture of the tank after the blackout, and a bonus picture of an urchin that decided it wanted to be a unicorn: 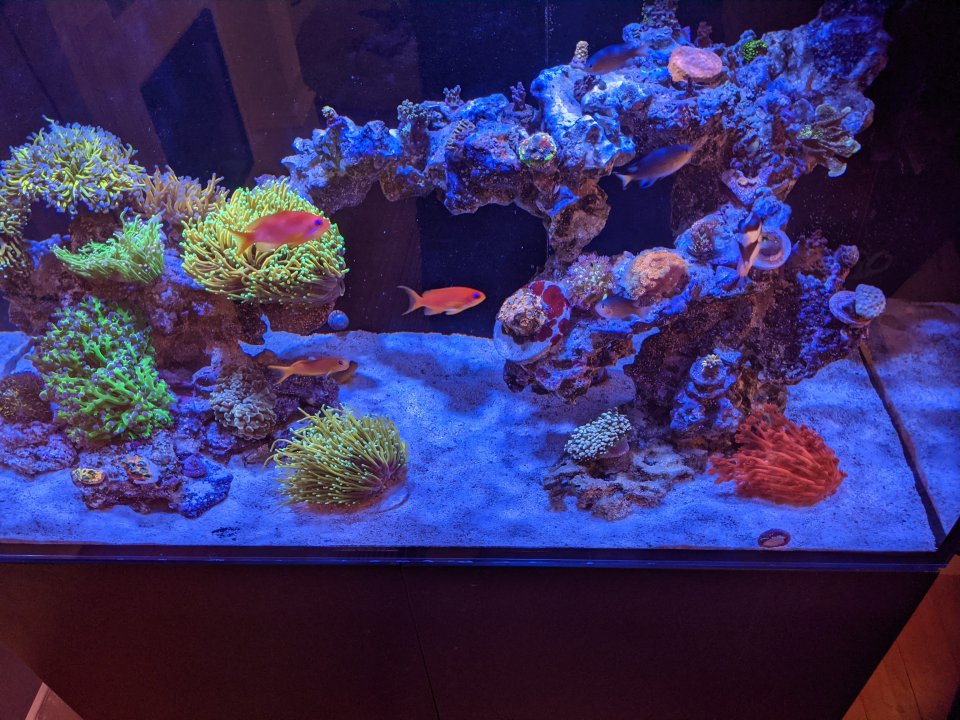 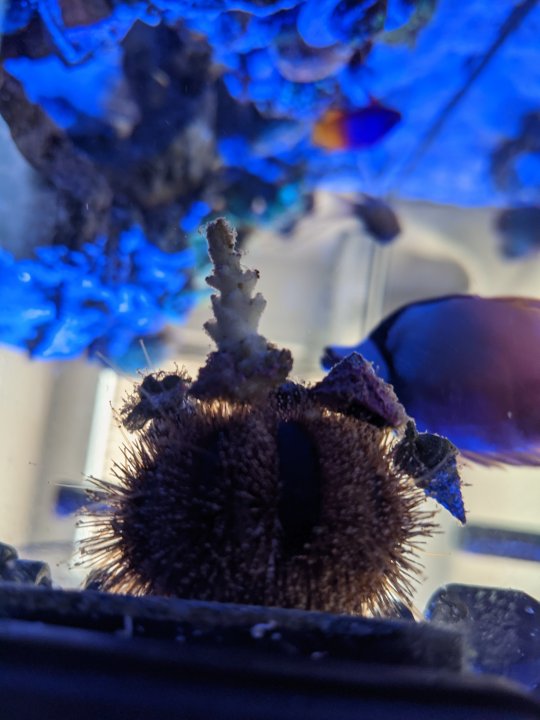 A humbling experience: I have a PhD in neuroscience and I'm being outsmarted by a fish.

A humbling experience: I have a PhD in neuroscience and I'm being outsmarted by a fish.
Click to expand...

Did the fish just present a thesis to you for review?

H2OPlayar said:
Did the fish just present a thesis to you for review?
Click to expand...

That would've been easier to do.

It somehow managed to read my body language; every time I went up to the tank with any intention of trying to net it, it would identify and choose the least-accessible spot in the tank to hide in. The first time it got close to the fish trap and I started reaching for the pull string (slowly, about 4' from the edge of the tank) it sprinted away and hid.

I finally got it when its stomach convinced it to take a few more bites of nori before it could run away.

Foxface has been removed from the tank. Its love for nori on a clip was its undoing, even though I felt like Elmer Fudd trying to catch that wascally wabbitfish as I waited next to the tank holding onto the drawstring.

Trying to get to the root of STN

Been dealing with some moderate STN on a random assortment of corals: my blue mystery acro, my pink passion acro, my ultron favia, and my jellybean chalice. I've done an iodine dip on all of them and started running fresh carbon; it's cleared up the water quite a bit but no noticeable change/improvement in the corals. (Although, there's been no noticeable *decline*, except in the jellybean chalice, so I guess that's a positive). I'll be fragging the chalice tonight to separate the healthy flesh from the receding part and putting one piece of it in my frag tank in the hopes two conditions are better than one.

This has been frustrating, given everything else in my tank has been growing well. The chalice, in particular, had grown exceptionally well for three to four months before spontaneous recession. So I opted to get an ICP test done on my tank because a) I wanted to make sure there wasn't something I was missing, and b) I'm a nerd and it's cool.

I got my results back today. The good news is, with the exception of iodine being slightly low (0.022 ppm, instead of the 0.03 - 0.09 range they recommend), everything else was nearly smack dab in the middle of 'ideal' territory. While I don't think moderately low iodine would be the cause of these issues, or a lack of coral coloration (based on the writings of Randy Holmes-Farley), I've opted to dose Brightwell Iodide supplement for the next couple weeks following manufacturer's instructions to see if there's any improvement in coloration.

The scientist in me is driven nuts by the fact some acros are doing great, some aren't, and a couple random corals (that were previously doing well) have become sickly for no discernable reason. I guess it's an important lesson, though: living things are complicated and, if everything else is doing fine, it's likely better to try and treat these individually rather than make things worse messing around with the rest of the tank.

Taking this as a win: my WD and homewrecker acro frags are thriving and starting to encrust quite nicely. 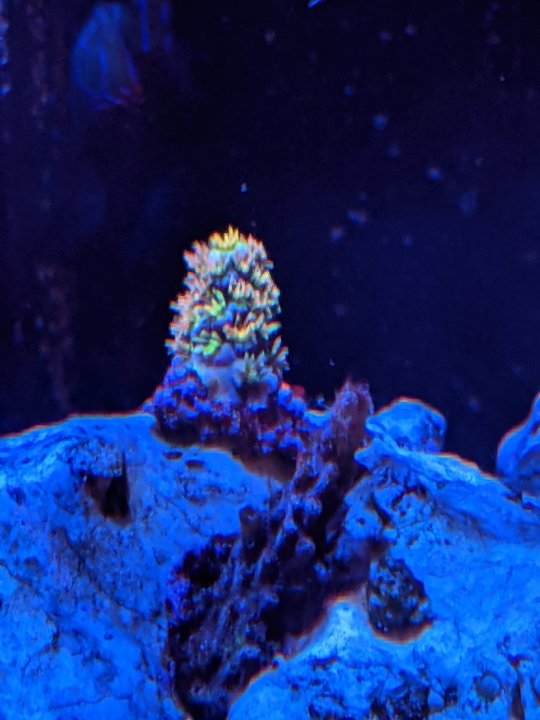 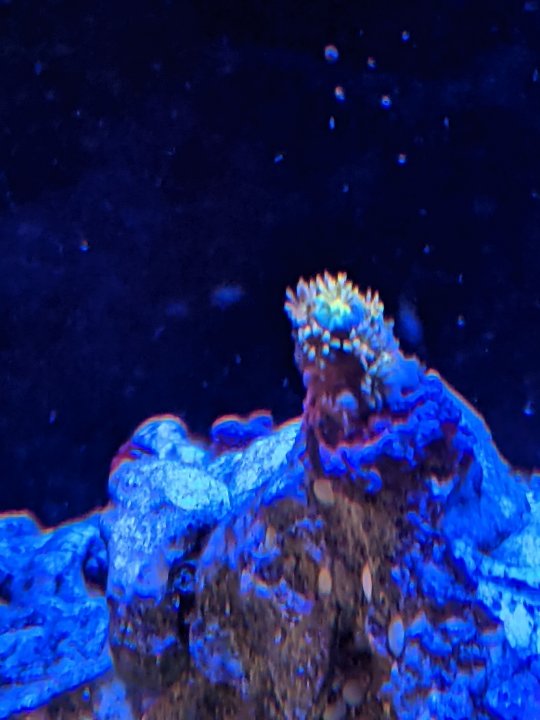 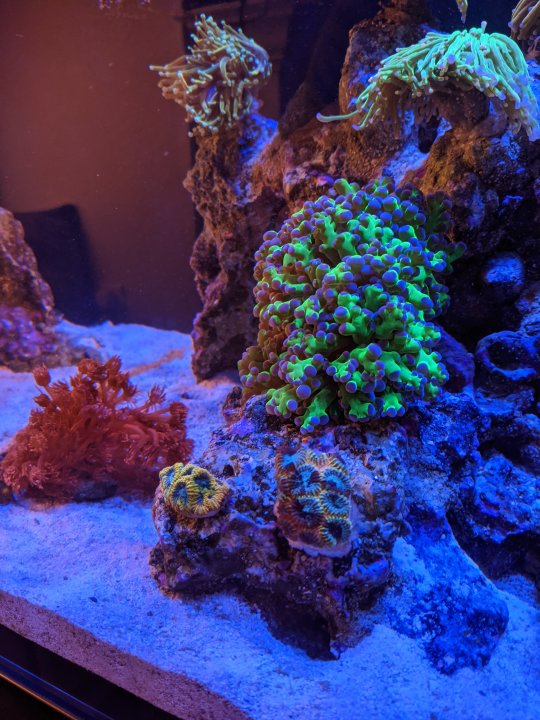 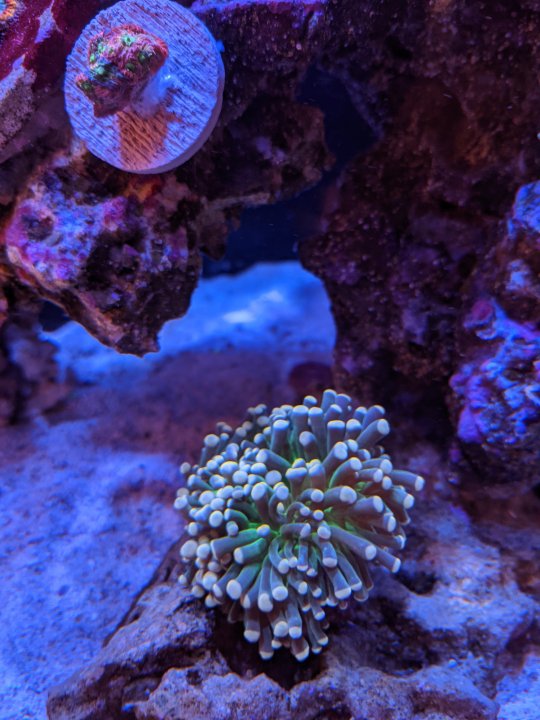 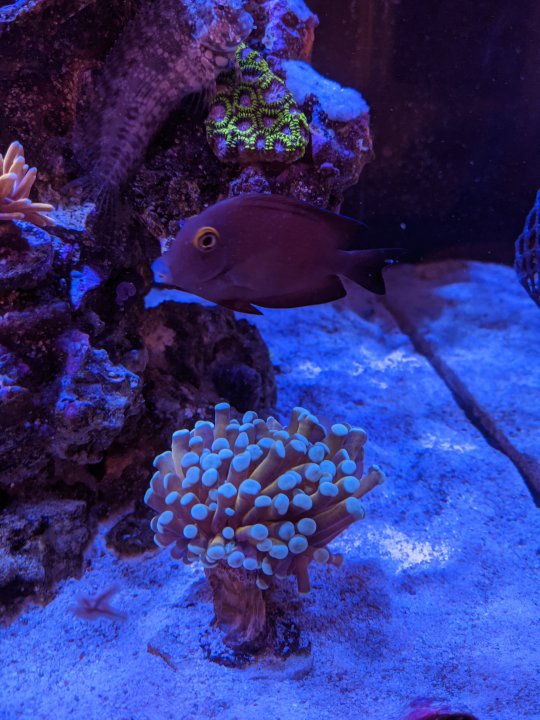 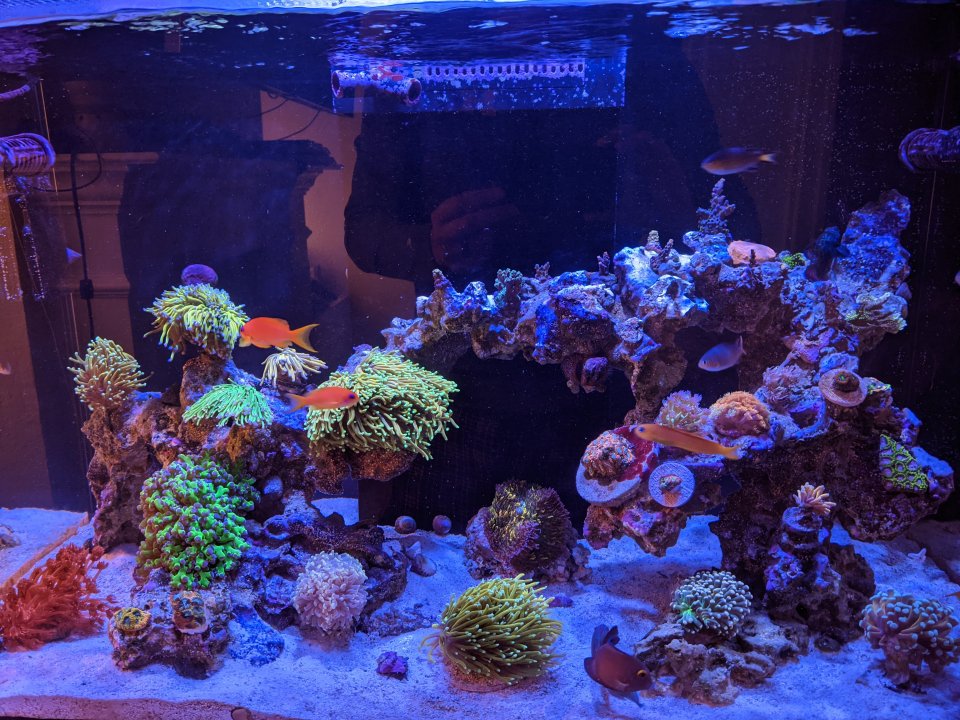 BARcard
My Foxface is afraid of the seaweed clip.

BARcard
Willing to house your chalice if it continues to degrade. I can put it in my frag sump or display.
Last edited: Apr 19, 2022

BARcard
the KMoore torch looks so different from the others.
anyone know if there are different species?
the KMoore Gold is a E. glabrescens

After thinking it over for a while, I opted to swap this tank over to ATI Pro two-part dosing instead of All for Reef after seeing multiple reports of peoples' tanks having STN. While I can't say this was the cause of my issues (and I still have my frag tank running on AFR, which is working beautifully), it does seem to have arrested it and I've seen flesh regrowing on some of my corals.

Also (almost certainly) coincidentally, I've finally got a decent amount of coralline algae growing in the tank. I strongly suspect the lag in developing significant coralline growth is because my tuxedo urchin puts in a lot of work - I've seen coralline for three or four months now, but only in areas that were inaccessible to it.

A couple big changes coming! The first is that, after ogling over @Srt4eric 's frag tank lighting, I've opted to swap my current lighting from a single AP9x to two G5 XR15 blues and change out my hood. Very appreciative to @Danhsj for the new hood and Radion rail and Eric for one of my two new lights, and I'm hoping to get that set up sometime later this week.

The second is I'm going to try and add on some more aquascape in the coming month or two. Ideally my wife and I want to put another arch on the left side of the tank for more high light/high flow coral, and we'll be putting an AI Nero 3 in the back left corner, pointed to the front of the tank, to provide more turbulent/targeted flow than the second gyre (which I've removed).

Some photos before the transfer/hood swap: 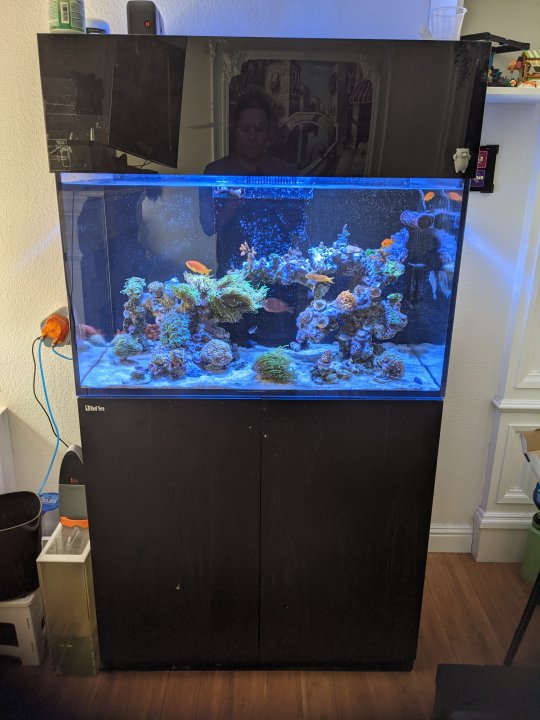 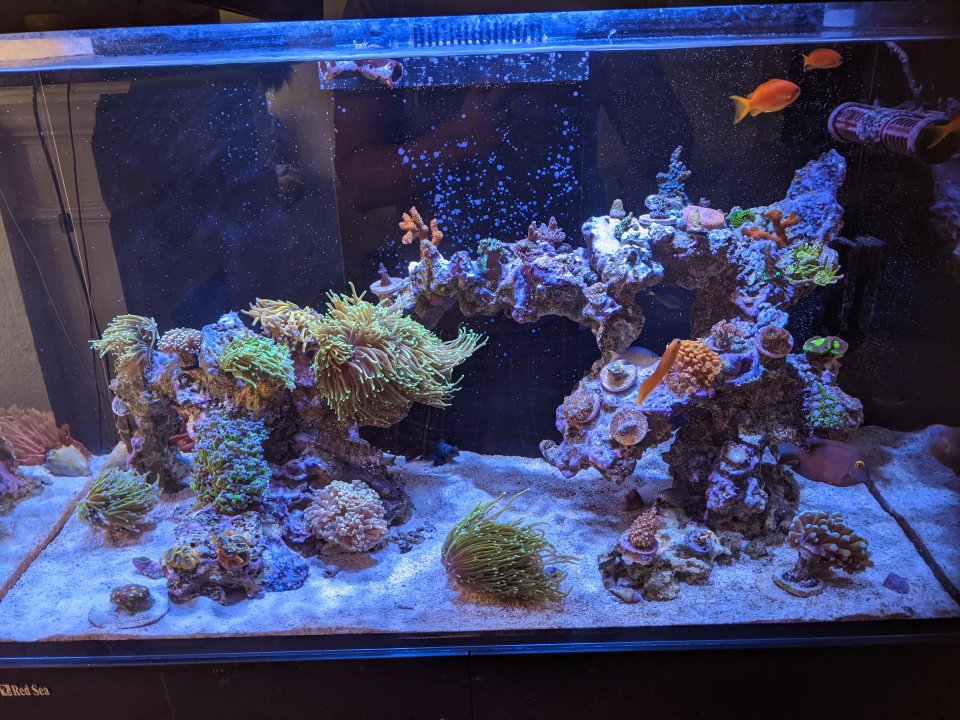 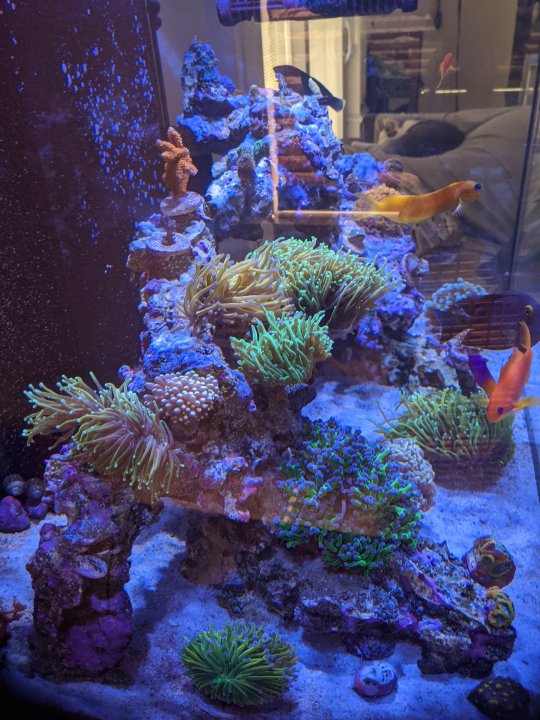 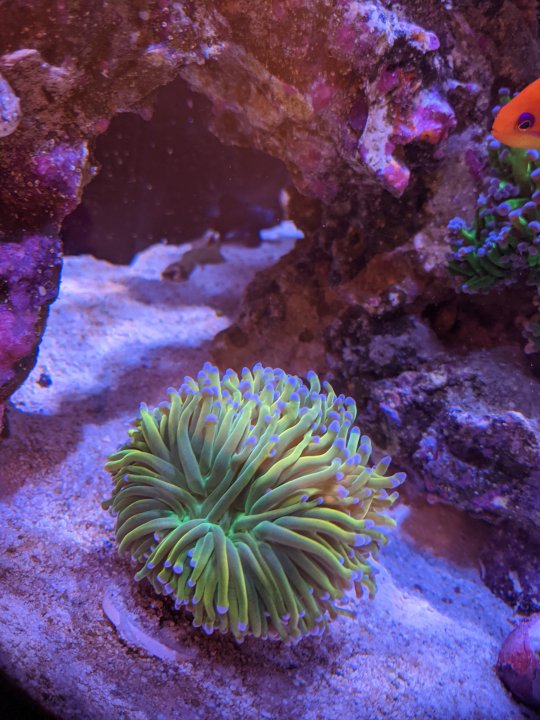 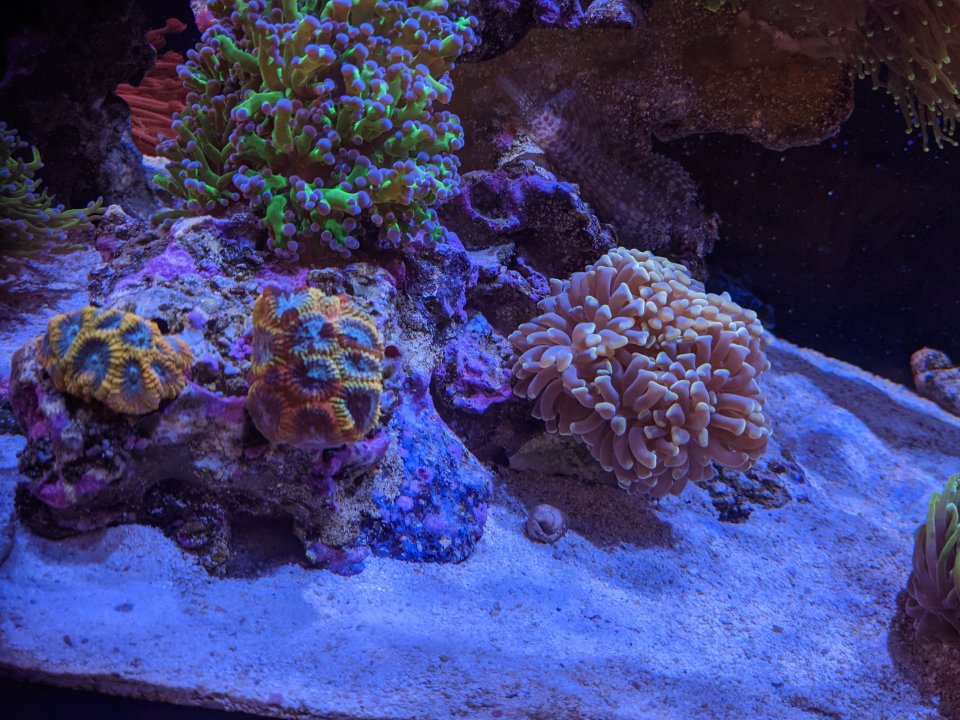 BARcard
Just me or tank looks better with radions #radionclub

Haven't swapped just yet. I'll be picking one light up from Eric tomorrow, and the other light (ordered new during the customer appreciation sale) should be arriving tomorrow as well. I definitely like the lighting of the Radions better from what I've seen. The pictures I posted above were more of a 'before', and I'll put the 'after' pictures up once I get the XR15s installed.
J

BARcard
I recommend BRS soda Ashe and calcium 1 gal mix, last months and easy to calculate. Cheap too. If you any can dose magnesium as well to keep it above 1400.

BARcard
You’ll love the radions. I’m switching mine over now as well. I’ve got 3 of them

Danhsj said:
I recommend BRS soda Ashe and calcium 1 gal mix, last months and easy to calculate. Cheap too. If you any can dose magnesium as well to keep it above 1400.
Click to expand...

Agree! If you want to run a test batch, I have the bulk 5 gallon buckets in my garage and am happy to share.

tankguy said:
You’ll love the radions. I’m switching mine over now as well. I’ve got 3 of them
Click to expand...

You would be correct. Got them installed today and am loving them. 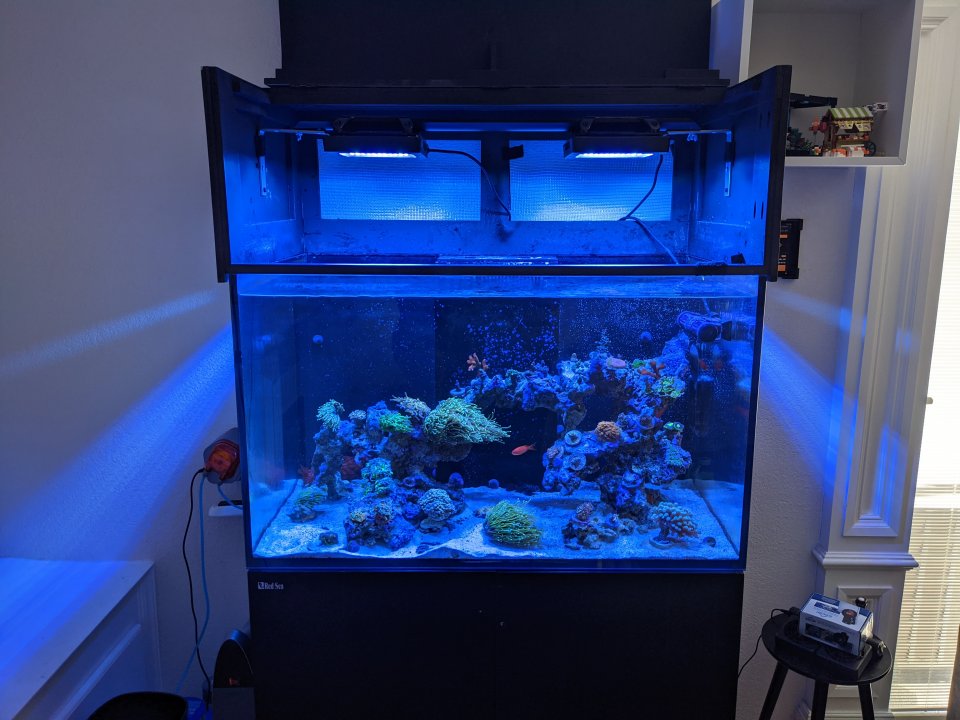 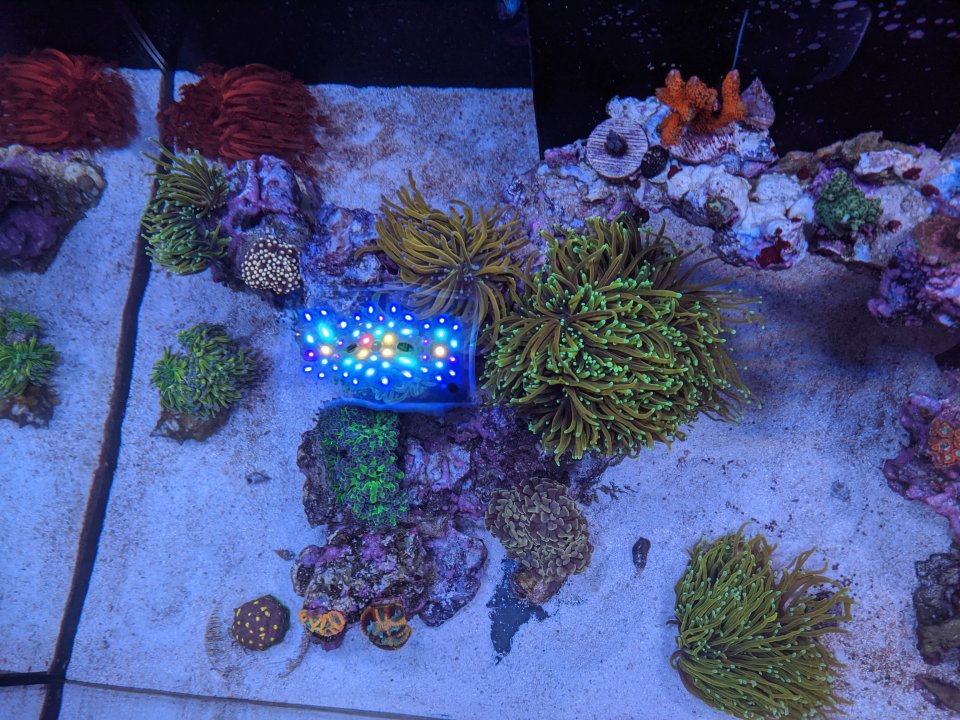 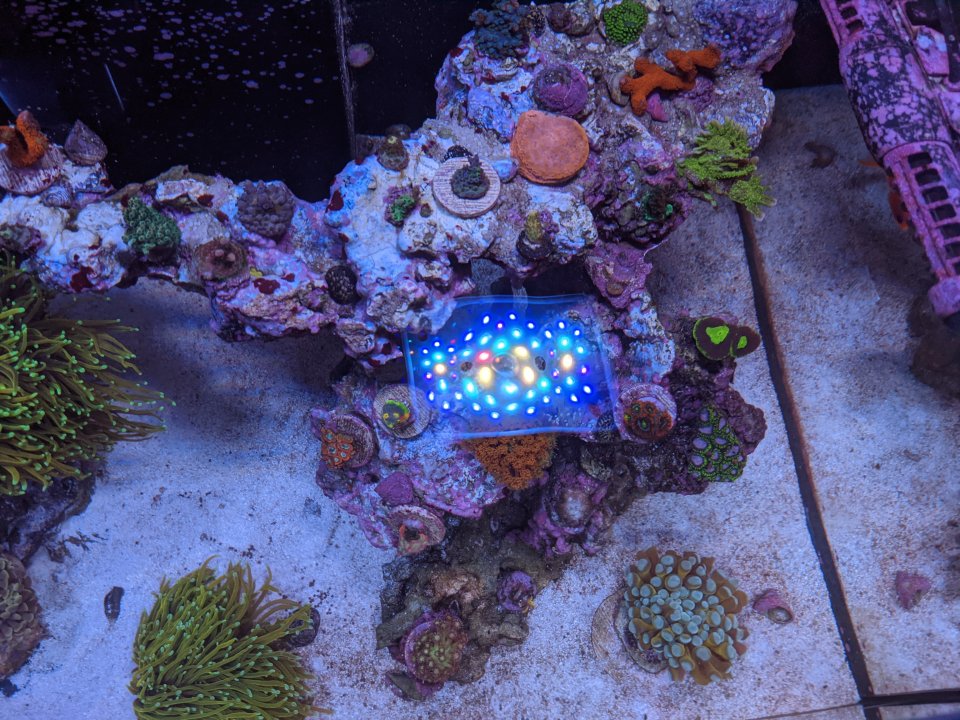 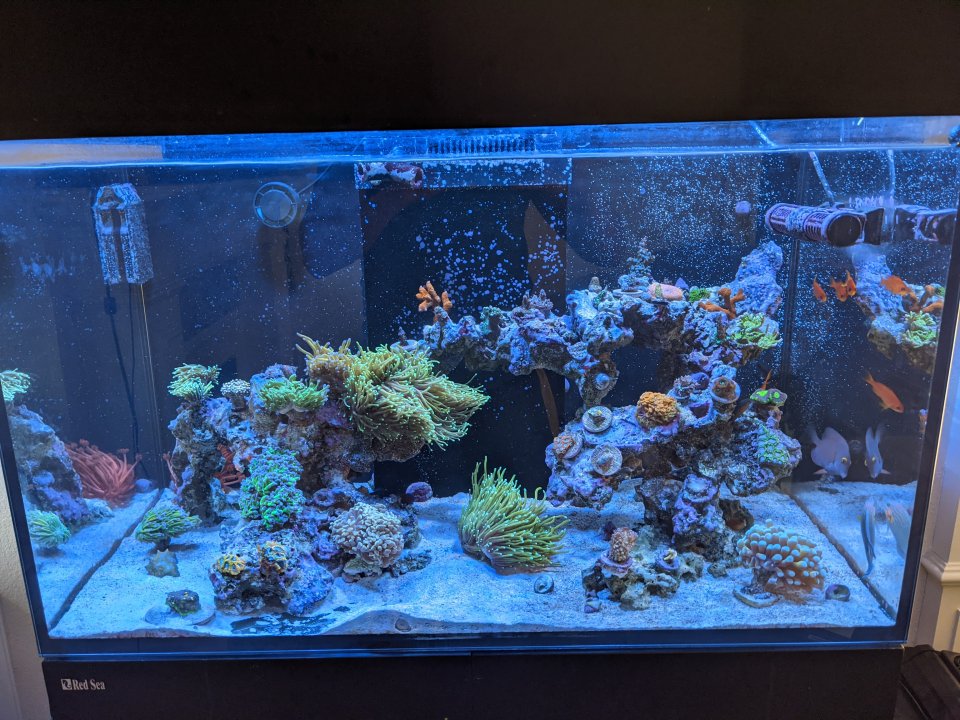 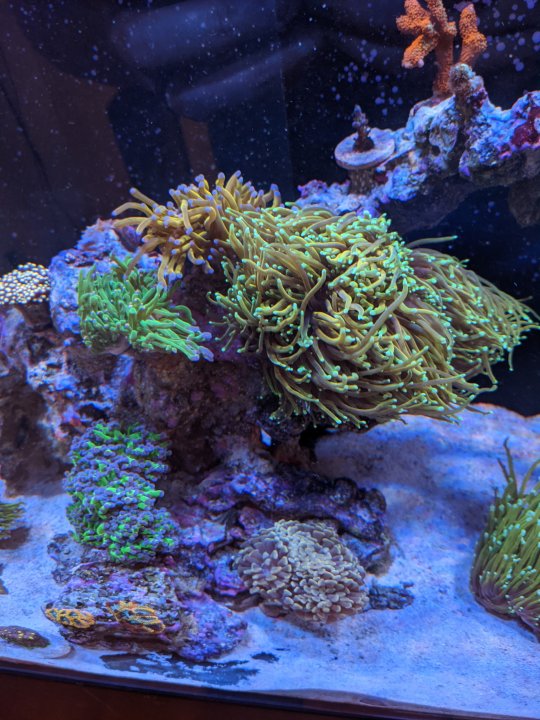 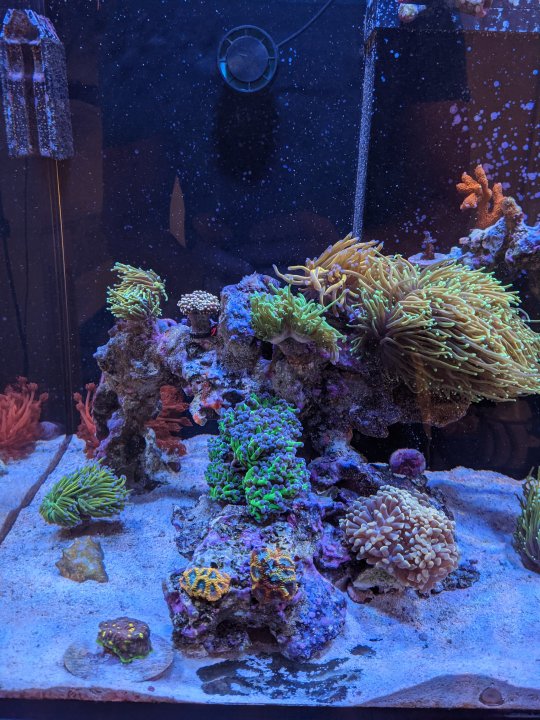 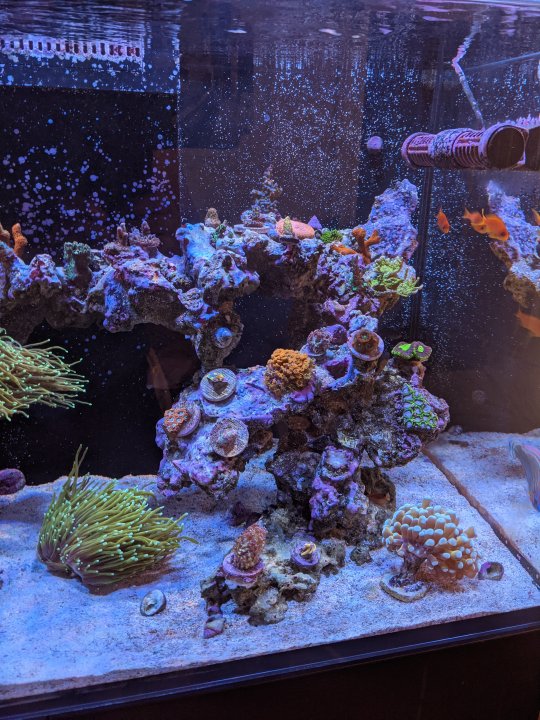 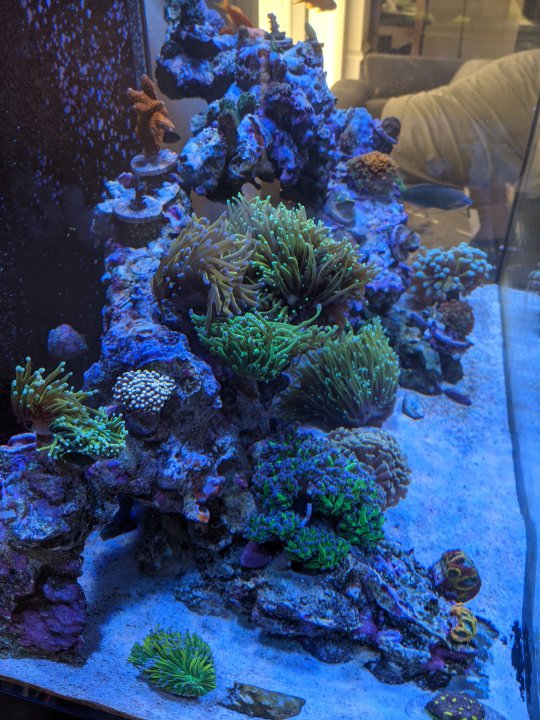 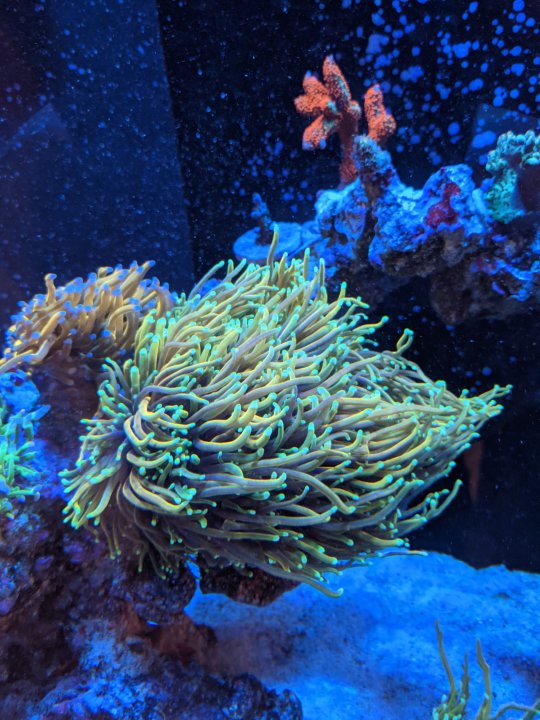 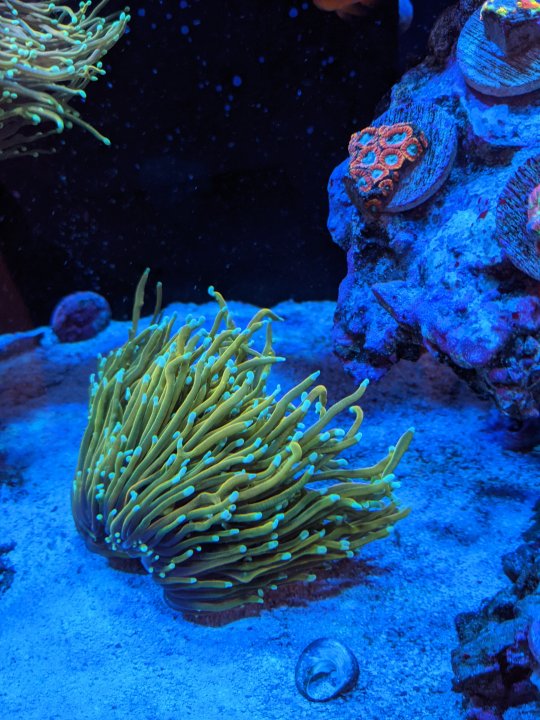 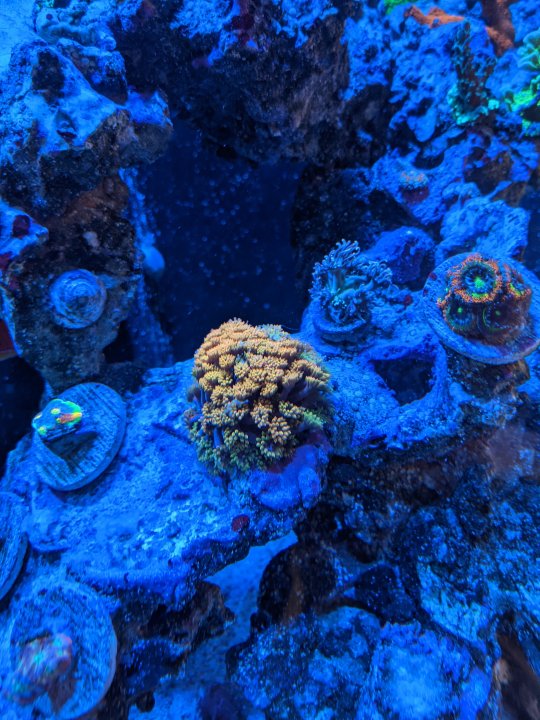 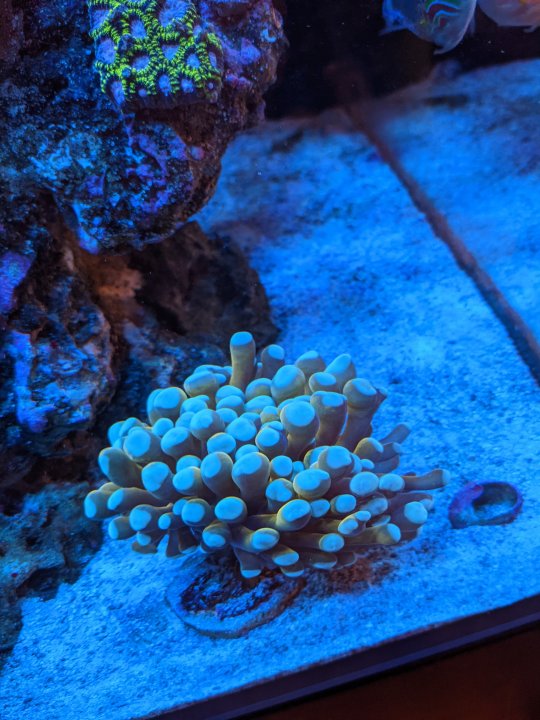 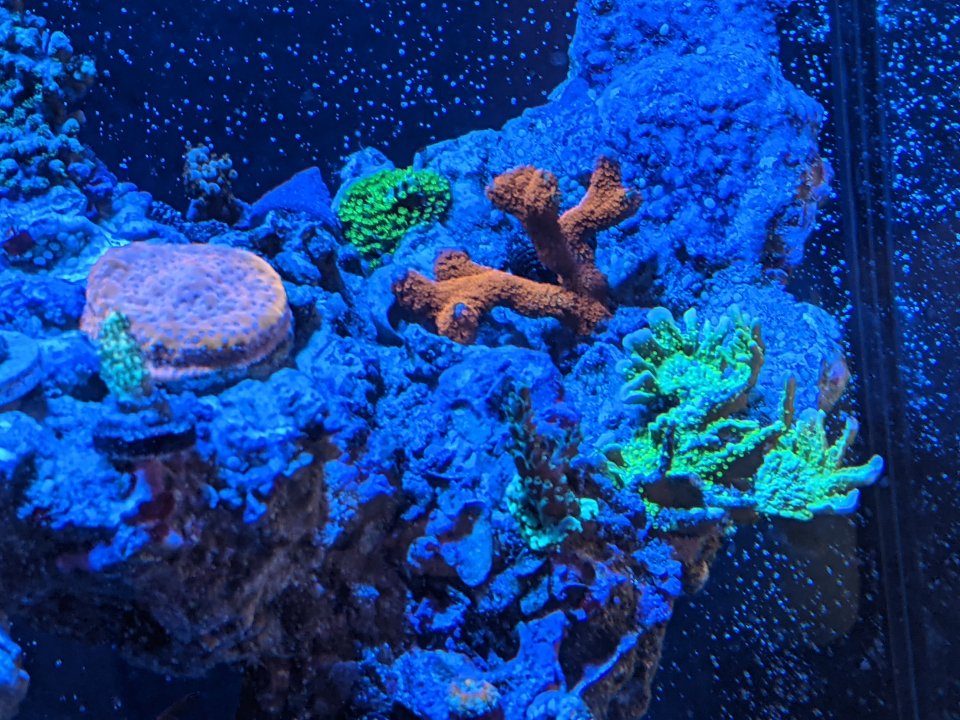