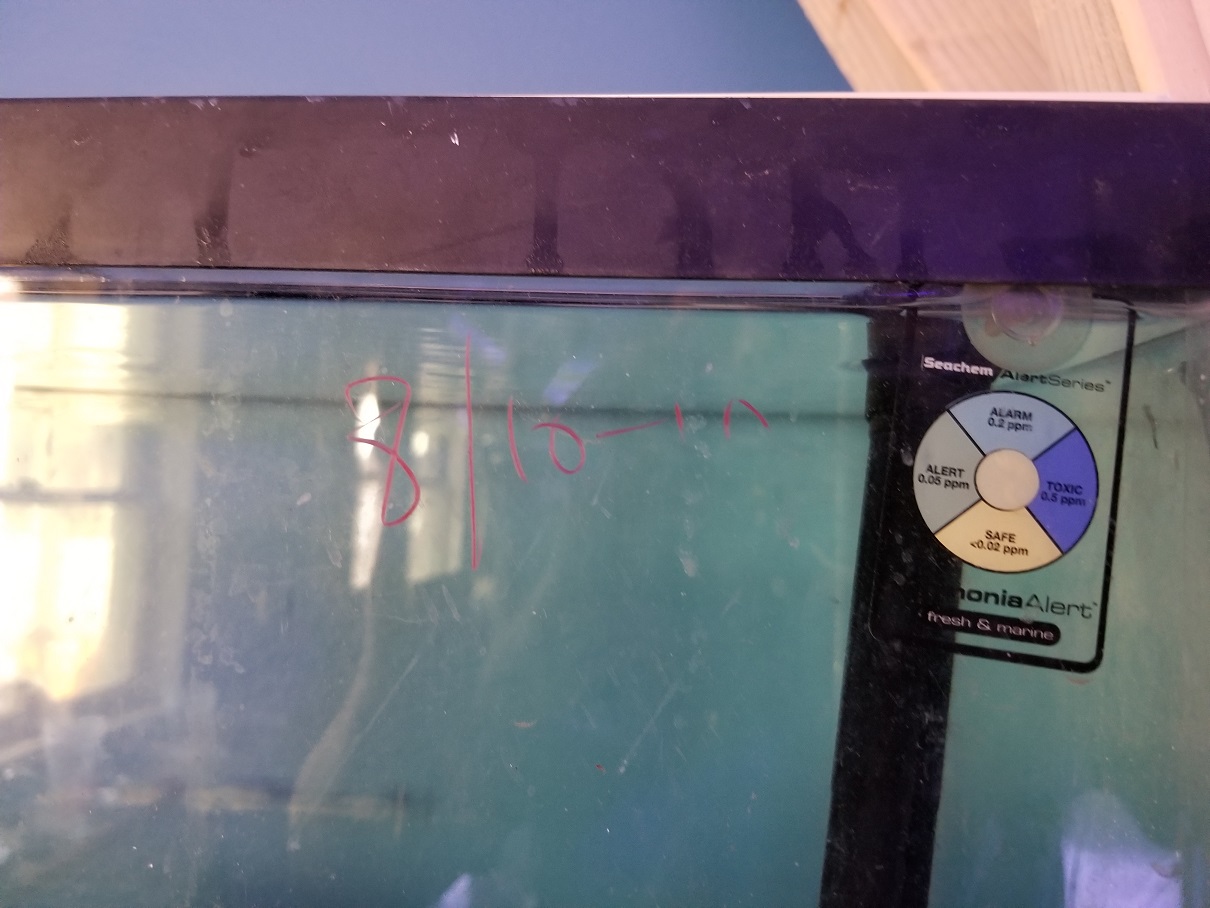 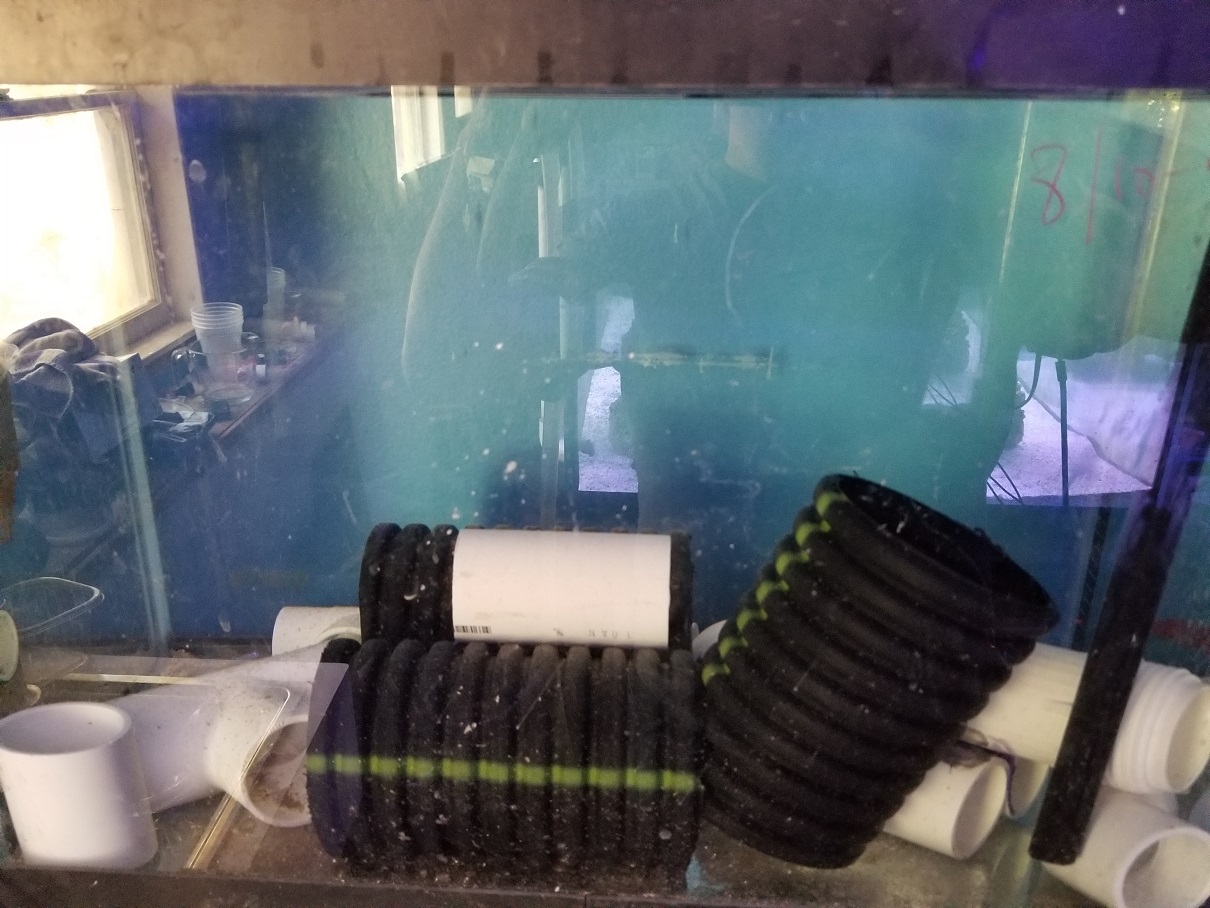 Staff member
So been trying to sort through all the boxes of junk that I have, quite a few of which will be put up for "I'll pay you take it" type of sales. One of the nicer finds was 5 - Vortech MP40 pumps, 1 of them doesn't appear to work, the magnet (dryside) spins momentarily then just kind of dies (driver flashes red). 3 of the drivers are DOA, however I do have some spare ones so I probably am good there. One of the nicer finds was the original Vortech driver similar to Tunze pumps where there's simply a knob that controls the speed, no modes, sleek metal case that isn't in any way rusted, too bad they decided to go the wireless direction and had to go to plastic (or they decide not to invest the 13 cents to put an external antenna ).

Either way I think the plan is to get some new wetsides, and call it a day, putting 3 pumps on the tank would be nice in addition to the MP60 that's already there and the Rossmont pump. I would contemplate upgrading the drivers but the upgrades these days don't have a wireless chip which as far as I can tell is something that may have happened during the ES upgrade, so doesn't make much sense if I want them to communicate with each other... not sure I really care if they do although getting complex flow patterns would be nice. We'll see how things work out before I get too into it.

Also got a lighting upgrade coming down the pipe, need to order some new parts to get it all together... unless Mario (@xcaret ) has some water proof T5 connectors floating around But also need to build a frame for everything, unfortunately I fell into the trap of cheap, so now I gotta pay for more expensive stuff plus the stuff I paid for already... dumb mistake on my part.

You know the basement galore is open, I do have waterproof end caps and I have an old MP wireless controller, the one before the ES
J

The wireless card swaps from control to control when you upgrade them. If you don’t have enough wireless cards you can get them separately as well.
S

Staff member
Sweet Mario, going to have to let me know when you're open for business, still got money for you too.

Yeah I see the upgrade picture Ecotech offers, however the old (pre-ES) wireless driver didn't have a card, it was simply part of the controller unless it's a new wireless channel they're talking on, and at $45/pump I'll have to think long and hard if I care about them communicating with each other. Do they sell a non-wireless MP40 though? Seems odd that they'd radically change up their driver board to have an add on wireless, unless of course it's wifi wireless then does make a bit more sense since you can get ahead of the standard of the time by swapping them out.
J

Clearly it’s been too long since I pulled apart a pre-ES driver, I should have known that. That does explain how I ended up with several non wireless ones though. Probably happened when I swapped up to the earlier ES drivers.
S

Seemed to eat fine the first 24 hrs, mysis hell even flake food, then on day 2 he looked at food and didn't make any attempt to eat it. Now took a photo just to see if anything is visual that I can see, parasites, flukes, etc as the camera can see better than my eye and then I can just look at the picture zoomed in and win! Read quite a bit of conflicting reports about the use of chloroquine phosphate with wrasses, not sure if this is the cause or not but part of me is saying no simply because this happened within 48-72 hrs. Either way I think next wrasse I stick in QT will simply be observation without any active treatment.

That said the blenny that's in there is doing just fine, eating like a champ in fact within 2 days I apparently trained him to come out of his hiding spot for food whenever he sees me.

Edit: More research showed a R2R page where wrasses are definitely listed in the "DONT DO IT!!!!" category of using CP, oh well, at least this wasn't that expensive of a mistake.
Last edited: Aug 13, 2019

That’s too bad. It looked pretty.

Staff member
Bummer!
Might have been CP. Hard to say. But with that timeframe, and eating well, ammonia is the main
other likely culprit, and it looks like you were checking that.
S

Staff member
Unless that ammonia patch was sitting on the shelf for so long it was expired who knows. But was eatting well first day and a half, fed multiple times a day, thenthe next day not eating, then this morning on the bottom of the tank

Staff member
If it is still set up, you might want to test Ammonia + Nitrite.

Staff member
Yeah, my fault for not doing the research prior... although I will say the LFS did tell me to use CP in QT they day I bought those fish. But yeah, from now on wrasses will get the sit and observe method of QT and I'll only try to treat if I see a problem. Apparently anthias are in this same boat too.

Wait a second... Tanks with water, corals, and fish?! Congrats on getting these running!

Sorry to hear about the wrasse - I'm still in the boat of pre-treatment being worse than the chances of disease, esp for non-tangs. Pick carefully and roll the dice
FWIW, Steve @ Lucky Ocean has been getting really nice Pintails in. Cheap @ $60.
S

Staff member
Yeah I know, he told me when I was there he sold out in like a day or 2.
S

I was going to swap out my temporary sump with the new custom sump that I built, unfortunately I had problem after problem with it, the first of which was putting a big ol scratch along the front of the acrylic. This was 99% my fault, I had a metal clamp inside the stand holding a piece of wood (details not important) and it didn't touch the skinnier sump, but when I put this one too I put a big ol scratch through about half the acrylic... of my branding F'ing new sump. What's 1% that's not my fault? Well if the builder left the paper on the front it probably wouldn't have happened, but I'm not going to give the guy crap. That said, I had my anger moment... and then another and another and another... but it's on the outside, it is accessible so I can sand it out when I have the time (it's definitely low on the priority list).

I was going to hook up my new Vectra pump too, but a 30-45 minute job ended up taking around 4 hours since none of the plumbing matched up to new holes, plus it's hot as balls which was helping fuel my anger, so I decided using the old pump it still works and it's less effort so getting it up and running was a primary concern and I can add the new pump later.

The key to doing this was doing a monster water change, I basically just turned the pump off, drained some water from the display, and tossed all the water in the sump... bingo water change! 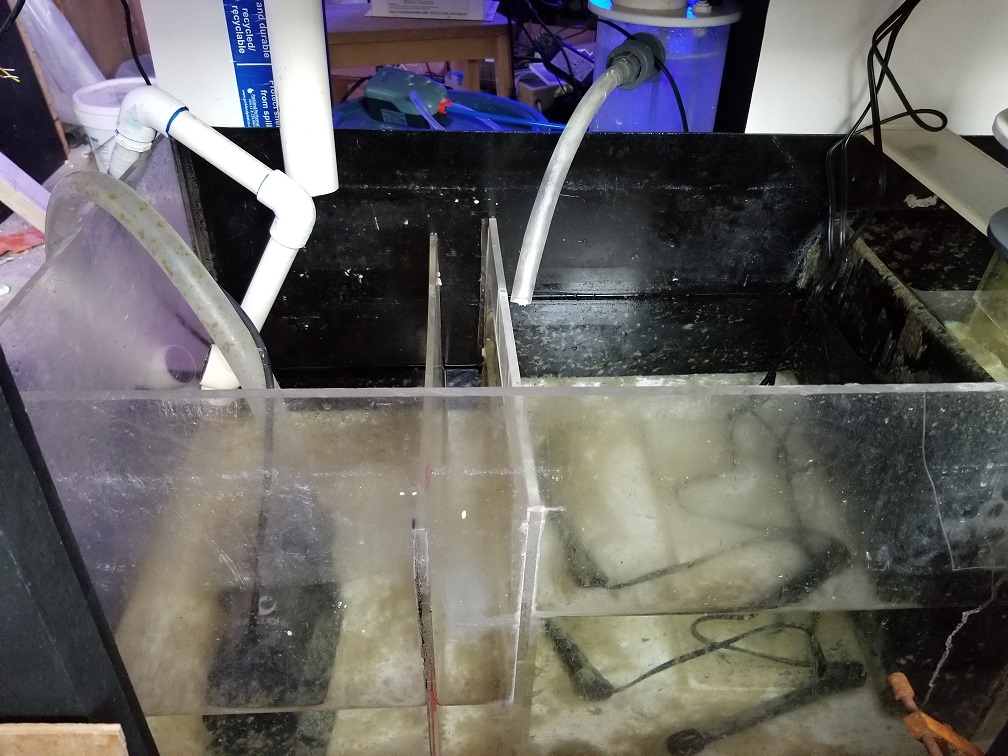 Took a couple pictures as I was draining it, so no skimmer in these pics. You can see the offending clamp on the bottom right. Just errrrgh!!! 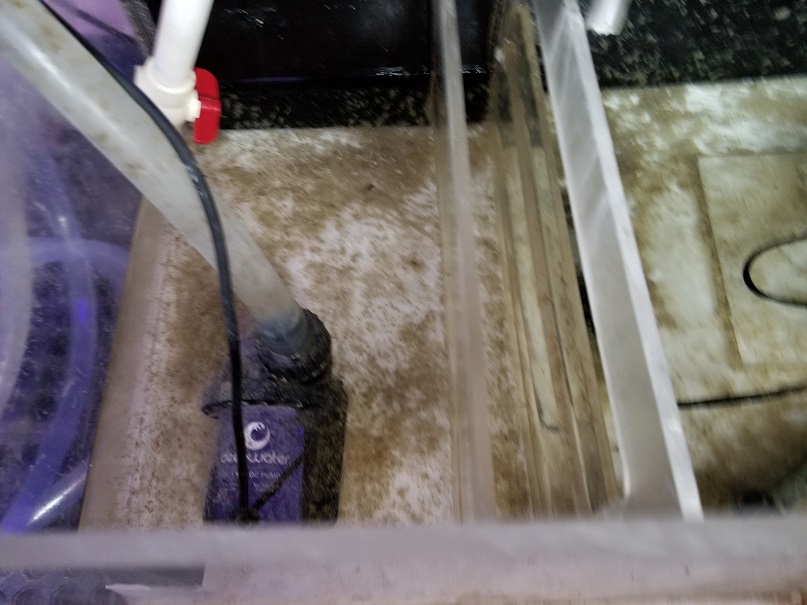 There was definitely a crap ton of detritus in there, some of it looks like mysis shrimp that have been "shucked", some of it looks almost like dust bunnies, makes me wonder if me cleaning down there got into the tank in some way, I mean it hasn't been that long to accumulate that much detritus... that said in the sump makes it easy to siphon out.

Oh and some news from the farm.
James would be proud 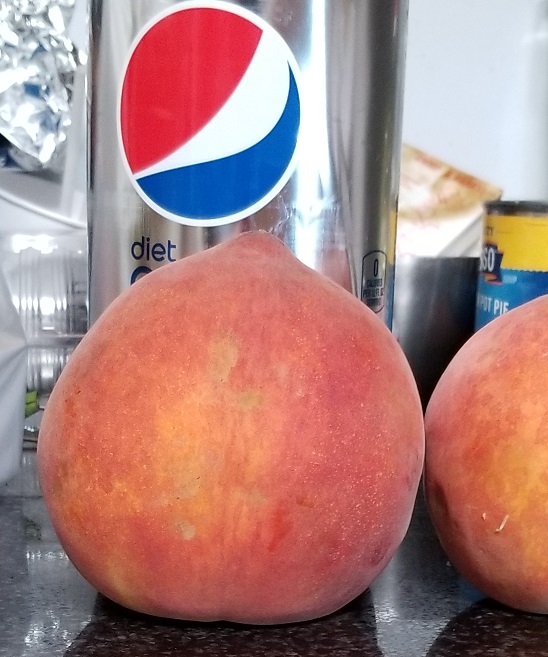 Yeah that's a peach, not a melon, 2liter bottle as reference. 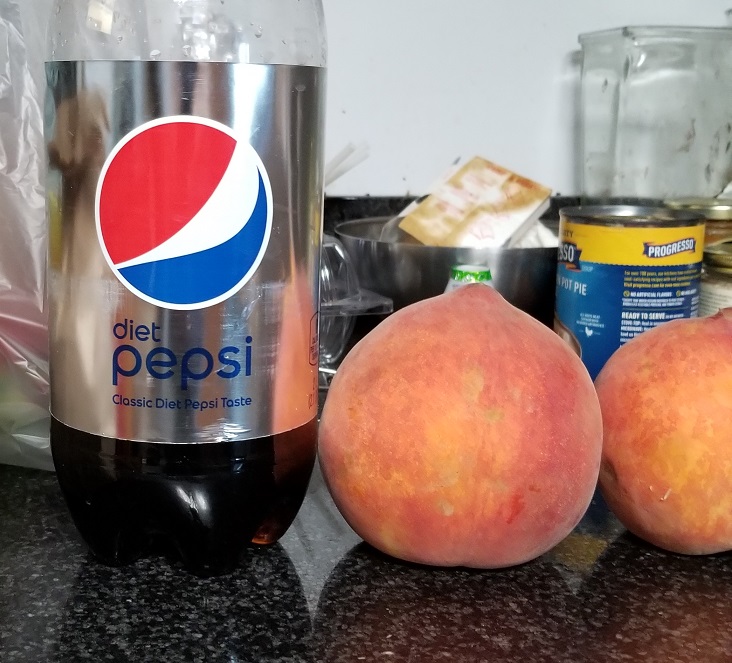 Side by side so there's no perspective shenanigans. Popped it on a scale, 1 pound 7.4 ounces. And yeah I checked, record is 1 pound 12.8 ounces, so not exactly record breaking but yikes that is the largest I've seen, and it's not even close.